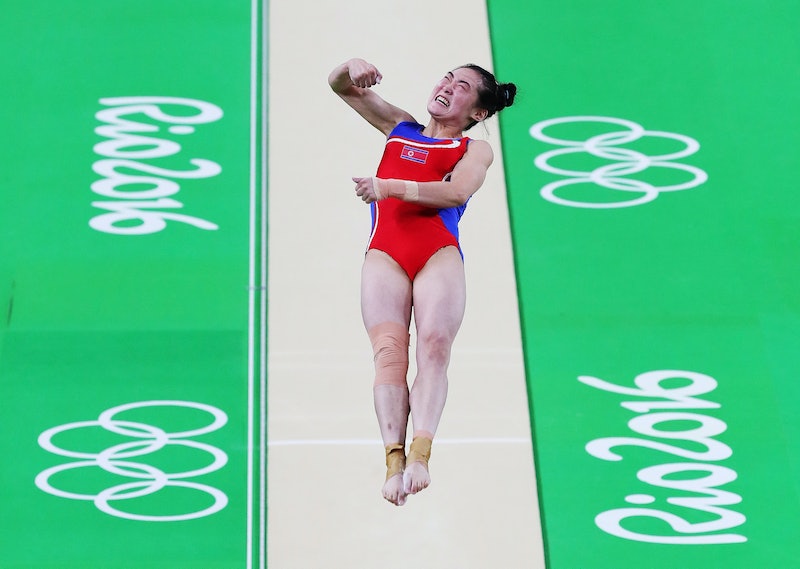 North and South Korean gymnasts Hong Un-jong and Lee Eun-ju took the most important selfie ever at the Rio Olympics on Monday, August 8. The Olympic selfie between the representatives from the two embattled countries exemplified the spirit of the games, and hopefully sent a message of unity back to the Korean Peninsula, where tensions have intensified in recent months. The picture quickly captured the world's attention, due to its sentimental and ironic nature. Despite being neighbors, North and South Koreans had to travel to Brazil to come together.

The unity between the countries is sorely needed, particularly now. North Korea is rapidly developing nuclear capabilities and launching missiles, according to South Korean intelligence. In response, South Korea has been practicing war games with the United States to prepare for potential military scenarios, which the North sees as preparation for an invasion. The tenuous relationship between the North and South could draw other countries in if it ever reaches a point where outside intervention is necessary, so it's reassuring to see signs of friendship and cooperation between two of the countries' citizens.

Geopolitical consequences aside, the selfie seemed to bolster both young women's achievements in the games. Hong placed second in the vault, her signature event, after the qualifying round on Sunday. She's expected to repeat her performance from the 2015 World Championships and medal in the event during the finals on Thursday. Lee didn't qualify for any finals, but she placed well among the talented pack of gymnasts, particularly considering her young age of just 17.

Although Hong is one of the prides of North Korea, as the first female gymnast to earn an Olympic medal for the country, some have expressed concern for her safety upon her return home. North Korea is notorious for human rights violations and prosecuting perceived crimes against the state, which may put Hong at risk after the Olympics. The high-profile nature of the image may protect Hong from any potential repercussions, but the volatile North Korean government is unpredictable.

Unfortunately for diplomatic relations between the North and South, Lee is a full 10 years younger than Hong, so this may be the only Olympics where the athletes overlap as competitors. Yet the showing at the Olympics, and the attention given to this powerful photo, could boost participation in gymnastics in both countries, as well as create a new athletic and diplomatic bond between the long embattled neighbors. If so, there will hopefully be more selfies and relationship-building to come for North and South Koreans.