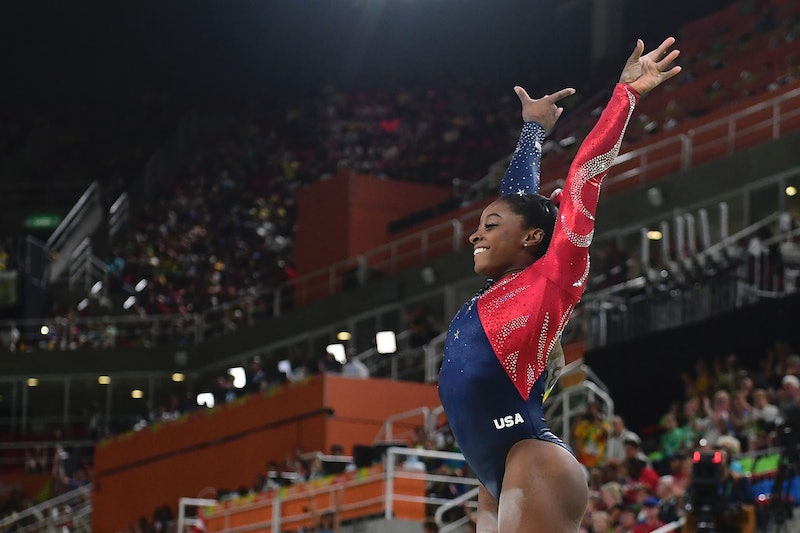 On Tuesday afternoon, the United States women's gymnastics team will be shooting for Olympic gold in Rio, competing in the all-around finals ― the first medal event they'll have participated in. And yet, despite being one of the undeniable stars of the team, and being set to compete in all four team events on Tuesday, there's one woman who'll be conspicuously absent from one of the finals coming up this Sunday. So why isn't Simone Biles on the uneven bars in the individual finals?

The answer, in simplest terms, is that her previous qualifying score on the uneven bars simply wasn't high enough for her to take a starring turn on them come Sunday, August 14. Thanks to the so-called two-per-country rule, each gymnastic discipline can only be performed by two of each team's competitors, meaning that the two athletes with the highest score will be the ones competing and the others will invariably be left out.

In Biles' case, she finished in the top two in the balance beam, vault, and floor routine, meaning she'll by vying for gold in all of those events. But she came in third in the uneven bars, meaning she'll be sitting that one out for the final. Instead, it'll be Madison Kocian and Gabby Douglas (whose dramatic gold medal win you may remember from the 2012 Summer Olympics in London) taking center stage on the bars.

Even though Biles surely would've been thrilled to compete in all four events in the individual finals, rest assured that the 19-year-old will still have more than a fair shot at claiming top honors. You'll get to see her take on every facet of the sport during the team all-around finals, with a gold medal on the line. To be absolutely clear, all four of the American women ― Biles, Douglas, Kocian, and another returning gymnast from 2012, Aly Raisman ― will be competing on Tuesday afternoon.

For what it's worth, this isn't the first time that some members of the U.S. team have been burned by the two-per-country rule. Back in 2012, star gymnast Jordyn Wieber was unable to compete in the all-around final because of it, which brought her to tears. As USA Today noted on Monday, Raisman (the gymnast who knocked Wieber out of the running in 2012) is a staunch opponent of the rule. She's said that it unfairly penalizes the greatest gymnasts in the world for sharing a homeland: "It’s just stupid, I think the two-per-country rule is the dumbest thing ever. Who cares if there’s five Chinese girls in the finals; if they’re the best, they should compete."

Regardless of anyone's opinion about the rule, however, it is most definitely in effect. Which means that, while you'll get to see Biles run the full gamut in the team finals with national glory on the line, she'll be getting a little time off from the uneven bars when Sunday rolls around. If you're curious to watch either event, the team finals are happening Tuesday, August 9 at 3 p.m. ET, while the women's uneven bars final is scheduled for Sunday, August 14 at 3:21 p.m. ET.