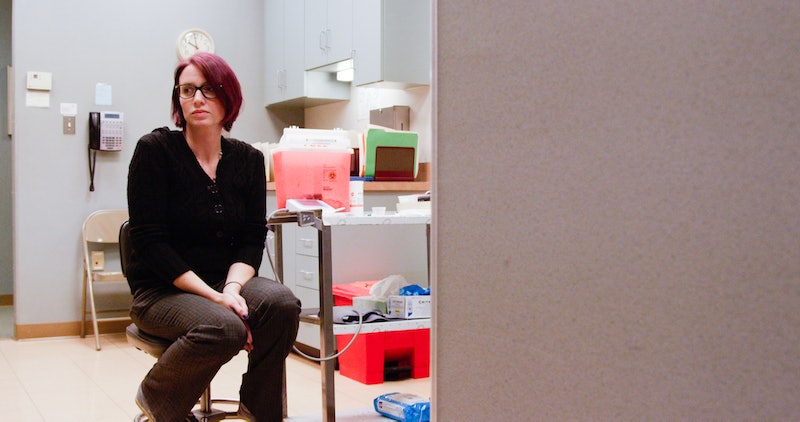 There's a new must-see film for anyone who cares about reproductive rights. Tracy Droz Tragos’ new documentary Abortion: Stories Women Tell deftly and sensitively examines a diverse group of women’s experiences with unplanned pregnancies. The film, which opens in theaters on August 12, follows Dr. Erin King and the staff of the Hope Clinic for Women, an Illinois-based abortion clinic which also serves patients from the neighboring state of Missouri. Thanks to state-mandated restrictions (in Missouri, women who want an abortion must wait 72 hours before obtaining one), Missourians seeking abortions are often forced to travel out of state.

Although Roe v. Wade made abortion legal throughout the United States in 1973, 1,074 abortion restrictions have been enacted at the state level since then — 288 (27 percent) of them since 2010 alone. Given the recent escalation of efforts to roll back these rights, other documentaries have highlighted harmful new laws, the women they hurt, and the doctors and clinic staff who continue providing healthcare in spite of them. Dawn Porter’s excellent TRAPPED , which also premiered this year, is one example.

What distinguishes Tragos’ film from others on this subject is that it focuses on a broader group of women, including anti-abortion activists as well as patients and providers. Based on the film, I’d assumed Tragos herself was pro-choice, and was initially surprised by her choice to include women who identify as pro-life, in part because I couldn’t imagine how she’d earned their trust. When we speak by phone, I ask about her personal perspective on abortion.

“For me, access to reproductive health care is a pretty fundamental right,” she tells me. “I do not have a personal experience with abortion,” she adds, but “that’s because I’ve had access to the healthcare I need, and I know many women have not been as fortunate as me, especially in Missouri.” (Tragos spent much of her childhood in Missouri.)

Given how strongly she believes in reproductive rights, how did she get pro-lifers to share their stories on camera? “They knew, and I was clear, that this was not going to be a political film and, I hope, not an advocacy film,” she says. "This wasn’t a film that was just going to have one voice. This was a film that would include the voices of many, many women … And I really made it clear that it was not my intention to demonize them, or make them out to be something that they weren’t, but just, with an open heart, to hear where they were coming from."

On this score, the film succeeds, and I admire Tragos' even-handedness. She does not portray the anti-abortion protesters she interviews as shrill or vituperative. They seem reasonable enough — at least, when one protester is not talking about hearing from God via the sign above a Planned Parenthood: "It's P-L-A-N-N-E-D. And my middle name is 'Anne.' And I keep seeing 'Anne' right in the middle of 'Planned.' And it's like, 'OK Lord, are you telling me that I need to get in the middle of this?'"

But in the end, it’s clear where Tragos’ sympathies lie, and where those of most audience members will too. Consciously or not, Tragos is on the side of King, the young physician who cares deeply for her patients, the clinic worker who comforts sobbing young women with gentle reminders of God’s love, the tough-as-nails clinic security guard who stands up to daily harassment, and the agonized young women who choose abortion — or premature motherhood.

At the same time, Tragos says that she doesn’t want us to choose sides. "I feel like, as a documentary filmmaker, I can’t — I can’t just make films about people that I agree with," she tells me. "You have to have compassion and empathy, and find connections with people that you don’t agree with. And I feel like that’s also potentially where there’s an opportunity for change around this issue and for a shifting of the conversation, is if there’s a little less demonizing all around … a deeper listening and a greater understanding of women, no matter where they’re coming from."

This leads me to wonder: What does Tragos make of the women she interviewed who call themselves pro-life but have had (in some cases, multiple) abortions? “You know, it is surprising and not surprising … All kinds of women have abortions, because nobody ultimately thinks that they’re going to have an unplanned pregnancy," she tells me. "These are not people who set out to have an abortion. But I was surprised that ultimately so many women who … as you said, who call themselves pro-life, have had abortions, and had them when they needed them and when they wanted them and then have looked back on their own life with some amount of regret."

“And yet they feel like their life path should inform somebody else’s, or that because they’ve had that experience, they know better for somebody else’s life — that’s where I really find the logic faulty.”

Tragos tells me that the anti-abortion activists featured in her film feel she portrayed them fairly, but wish she’d included more of their voices. “I knew ultimately that the film would be too this way or that way, depending on the audience and depending on the individual,” says Tragos. “And ultimately, it wasn’t like I was going to be able to strike a completely neutral balance, as much as I wanted to have a balanced film that wasn’t just an advocacy piece that felt like preaching to the choir.”

Abortion: Stories Women Tell does not preach, but it can’t help advocating — and that’s not a bad thing. It demands sympathy for vulnerable young women who are shamed by their families and communities for perceived immorality, and denied critical emotional and financial support, whether or not they choose abortion. When a young African American woman who dreamed of medical school decides to continue her pregnancy, she earns mockery, not respect, from her peers. “What channel y’all with? This 16 and Pregnant?” a boy shouts as a camera trails the girl, her narrow shoulders braced for insult.

Tragos tells me her primary takeaway from making this film was how isolated women feel, no matter what they choose: "There is shame and stigma whether they’re going through with an unplanned pregnancy, whether they’re placing a child for adoption," she says. "There’s shame and stigma for having an unplanned pregnancy, and feeling alone and like it’s only happening to you and it’s a secret and it’s shameful."

What does Tragos hope her viewers will come away with? “I certainly hope that this film can help bring some solace and lessen that [shame], because unplanned pregnancies are going to happen, we can do things to prevent them, but we need to not shame women, no matter what their choice is.”