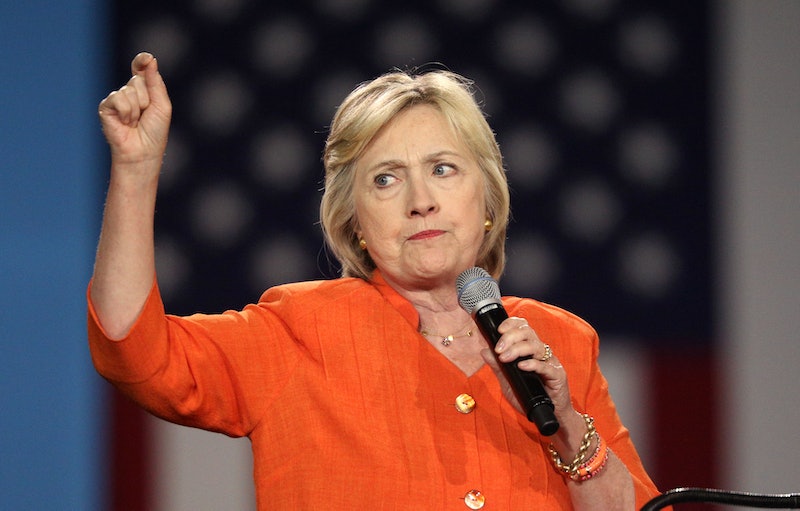 If you've been tuning into the Olympics on NBC lately, then there's a reasonably good chance you seen, well, one of America's major presidential candidates asking for your vote. And that's no accident. Hillary Clinton is buying up Olympics ad time to try to press her advantage against GOP nominee Donald Trump, and so far, she's done so basically entirely unopposed.

As Julie Bykowicz detailed for the Associated Press on Tuesday, Clinton has spent nearly $14 million on advertisements airing during the Rio games, compared to a grand total of zero dollars from Trump. It simply hasn't been a page in the Trump campaign's playbook throughout this election to spend money on broadcast advertisements, given the candidate's uncanny ability (based largely on his inflammatory, stream-of-consciousness tweets) to generate free media coverage.

But following a couple of weeks that have gone devastatingly poorly for Trump (at least that's what the polls suggest), and have given the impression that his freewheeling quest for media attention might be backfiring, Clinton's Olympics ad buy comes at a crucial and interesting moment. As it stands now, Trump is trailing Clinton by more than seven points nationally, and his electoral map is looking more and more desperate by the day.

The ad above, hitting Trump for his decision to sell ties and shirts made in China and Bangladesh respectively, has been running throughout the games. It features an especially pointed moment at the end of the ad, when Trump smirks knowingly and gives a slight shrug at being called out for his use of foreign manufacturing, makes for an underrated and striking image.

To contrast, the Trump campaign hasn't had a single national ad buy in this campaign cycle, and one of their most recent offerings was this web video they uploaded to Facebook, showing a Pac-Man version of Clinton chomping up deleted emails.

Obviously, it doesn't have anywhere near the production value of what the Clinton team is putting forward, nor quite the emotional punch. But you have to give the Trump team some credit for cost efficiency, at the very least, because whatever the price tag was on that video, it probably wasn't nearly $14 million.

It'll be fascinating to see whether the Trump campaign continues to eschew traditional broadcast advertising for the rest of the campaign, especially since it recently had some strong fundraising. But for the time being, the divide is pretty transparent — Clinton is content to flood the airwaves with her brand and her message, burning up that big pile of campaign cash she's been painstakingly building up, while Trump seems more inclined to sit on his hands.

As for which strategy will ultimately be validated, only time will tell. On the one hand, the Olympics are about as high-profile as it gets. On the other, though, the Rio games are currently getting some of the worst ratings for an Olympics in more than two decades, so the impact might not be quite what it would've been, say, in 1996. Back then, the games were being held in Atlanta, Georgia, a golden ticket to sky-high American viewership.