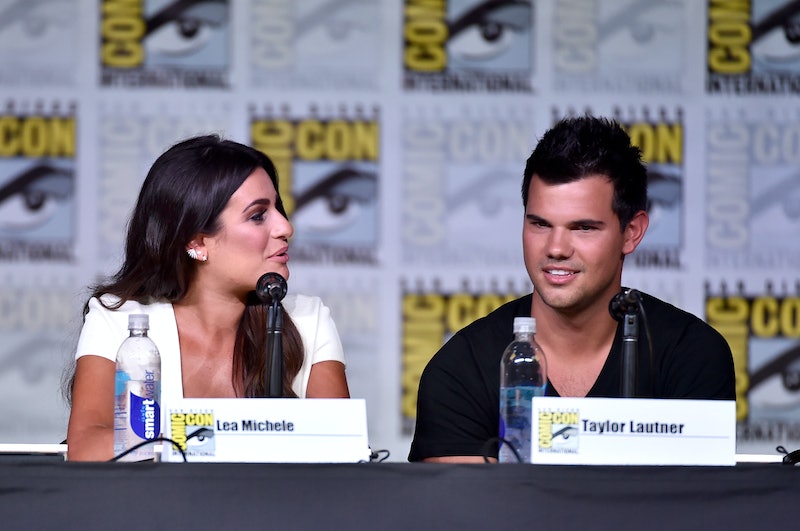 Celebs want all the scoop about Taylor Swift, her love life, and which songs are written about her exes, too. During a live Facebook chat Monday for Season 2 of Scream Queens, John Stamos and Lea Michele quizzed Taylor Lautner about Taylor Swift. For those in need of a refresher, Lautner and Swift dated for a few months in 2009, but broke up that December. It's been rumored for awhile now that T. Swift's song "Back to December" is about the Twilight star, which is exactly what Michele and Stamos grilled their co-star about. Not only did Lautner pretty much confirm that the song is indeed about him, but Michele and Stamos proved they are just intrigued by Swift's romances as the rest of us and need all the gossip about her lyrics.

The topic of Swift and Lautner started thanks to Stamos admitting to Michele that he "exposed who Taylor dated earlier in one of the interviews." Of course, the 29-year-old Glee star had to get in on the action and brought up Lautner's past relationship with the 1989 artist. Lautner quickly became uncomfortable, but that didn't stop Michele. She asked,"Didn't she write a song about you?" To which he replied, "That's what she does. She writes songs."

The singer continued to press Lautner about it and needed to know if Swift's song about "a sweater and a hat" was about him. In addition to the actor who brought Jacob Black to life admitting that Swift makes "good music" and that he listens to it, he could not get on the same page as Michele with the whole hat and sweater thing. Michele attempted to quote the lyrics and said, "Something about, 'If I would have known / I wouldn't have done that / I'll make you a hat.'" Even Stamos inquired, "Did she make you a hat?" Lautner answered, "She did not make me a hat." Michele wouldn't give up about the hat, but Lautner tried to shut it down (in a nice way, with a laugh and a smile) by saying, "I don't know where she's going with this hat thing."

Either Michele is convinced that Swift did sing about a hat and a sweater in relation to Lautner or she was just working her magic to push her co-star to name the song written about him. "It's like your hat... in December!" she said, which then got Lautner to admit, "It's called 'Back to December.'" Stamos then contributed by adding, "'Back to Your Hat in December?'" Lautner answered, "I don't know about the hat." By the way, neither a hat or a sweater is mentioned in the song. Can we take a moment to say, "Way to go, Michele!"? She just might need to be credited from here on out as the person who can get Swift's exes to talk.

What could've been a tense conversation turned out to be a light one filled with laughter. Let's give props to Lautner for being such a good sport and putting up with Stamos and Michele. Also, let's thank the Fuller House actor and the Broadway star for getting Lautner to open up a tiny bit about Swift and "Back to December."

To see their thoroughly entertaining grill session in its entirety, scroll to the 9:30 mark. If you also consider yourself a Pretty Little Liars fan, watch until the very end to see Michele question Stamos about why he has Ashley Benson's phone number. Michele would make a pretty great detective, if I do say so myself.