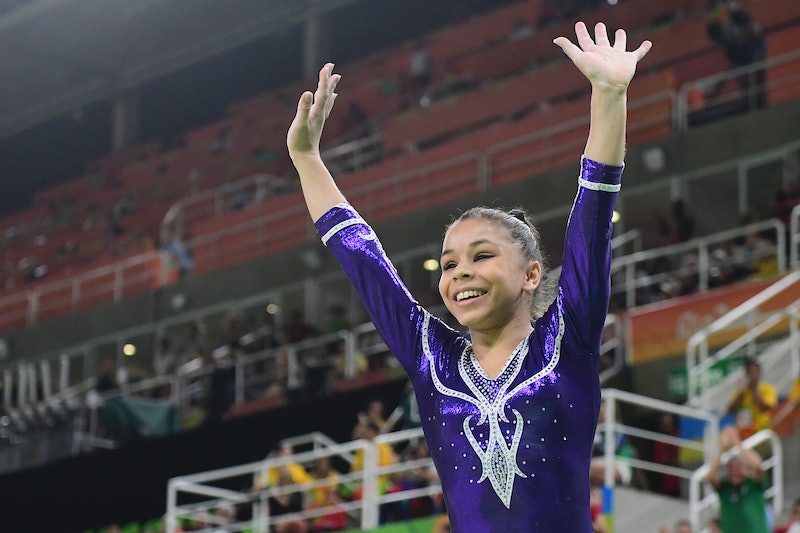 The visibility that the Olympics draws to international, and sometimes local, athletes is easily one of my favorite parts of the events. Who is gymnast Flavia Saraiva at the Olympics? This 4'4" Brazilian teenager, called "the tiny mighty," is a breakout favorite at the Rio Games. Already a force of nature, she's going to inspire so many little girls around the world. What's awesome about that is that Flavia Saraiva is inspired by Simone Biles (aren't we all) from the United States women's gymnastics team.

Saraiva came in third on beam in the qualifications. The tiny gymnast's beam performance was so graceful and flawless that she's definitely one to watch in the individual event. She'll give Simone Biles a run for her money in both the beam and the Women's All-Around later this week.

Another inspiring thing about Saraiva is that when she fell in the uneven bars qualifications and her coach had to catch her and lift her back up — she didn't let that stop her. She let out a few tears, completed her routine, and earned the points necessary to get her team to the finals. It's important to have heroes that are not only successful, but who allow themselves to fail. The fact that she recovered from that hiccough and is still a favorite to win is incredible.

The 16-year-old medaled in the 2014 Youth Olympics and could easily take home a medal in Rio. Her standings from the qualifications placed her third on beam and nineteenth all-around, though she will compete in the individual final as Brazil's second representative alongside her teammate Rebeca Andrade. After the team finals Tuesday, you're definitely going to want to watch for "tiny mighty" Flavia Saraiva.