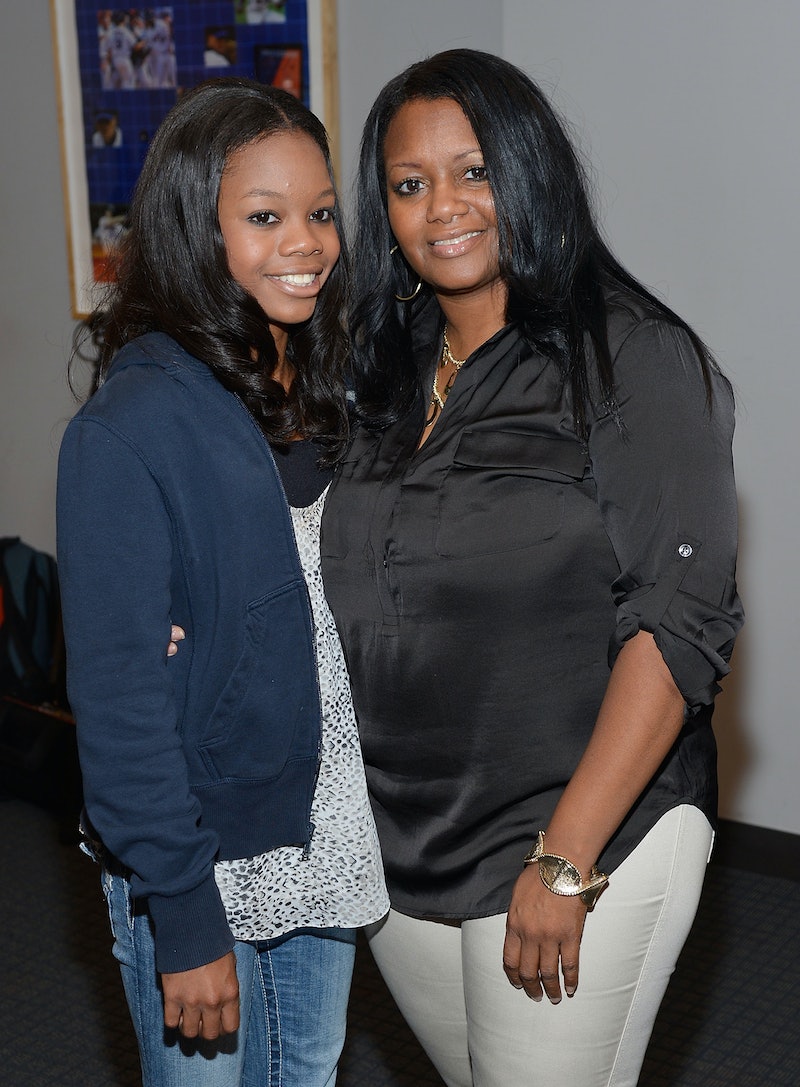 When it comes to the Olympics and the U.S. gymnastics team, you probably know a thing or two about Gabby Douglas. However, do you know anything about her family and specifically her mom? Let's just say that Gabby Douglas' mom Natalie Hawkins is pretty amazing. According to an interview the Olympian did with People in August, not only did the 20-year-old's mother raise her four kids all by herself, but she allowed Douglas to leave home and follow her gymnastic dreams at just 14 years old. That has to take a lot of courage, strength, and support.

It wasn't an easy decision for Hawkins. Even Douglas' three older siblings had to nudge their mom to let their baby sister leave to train with coach Liang Chow. "We had to be like, Mom, do this, please, please, please, and it was extra hard because she's a mama bear and she's so protective," Douglas' sister Arielle Hawkins told The New York Times in 2012. "So we made a pros-and-cons list. Making the Olympics was a pro. Missing her was a huge, huge con."

Douglas recognizes the sacrifices her mom made, especially in pushing her towards her goals. "My mom definitely encourages me throughout my whole journey, and she's always been there," the gymnast told People. "She just tells me to go out there and keep fighting and just be really bold and courageous."

Similar to Douglas, Hawkins is also somewhat a star. She and her family have their own reality show on Oxygen called Douglas Family Gold , which first premiered in May. She also once worked as a debt-recovery specialist for HSBC. Now, Hawkins is even more involved her daughter's life, because she acts as Doulgas' manager.

While talking with Us Weekly in August 2012 during the London Olympics, Hawkins revealed she has "no regrets" about letting Douglas leave her home of Virginia and head to Iowa to train for the Olympics. When it comes to advice, she dished out some great wisdom. "Have fun — that's a really big thing that I always tell her," Hawkins told Us about the advice she gives her daughter. She added,

"This is your sport, and you love to do it, so just go out there and enjoy it. How many other times are you going to get to compete at the Olympics? Soak up every minute of it. Push out all distractions. Fear is crippling; there's nothing to be afraid of. You've trained for this moment... you're going to be nervous, but let it fuel and feed your desire to go out there and get what you want."

Even though it may seem so, life hasn't always been filled with gold medals for Hawkins and Douglas. In August 2012, Hawkins filed for Chapter 13 bankruptcy. According to ESPN, this particular type of filing "allows people to reorganize their finances and pay down debt over several years." Like the brave and strong individual she is, Hawkins addressed (via ESPN) the bankruptcy in London at the Olympics. "It's my story, it's part of me," she said. "I'm not even embarrassed about it. It shows that even though I didn't like to have to do it, I'm glad there was something there for me to be able to protect my home."

Based on her response, it's clear where Douglas gets her strength from. Basically, she and her mom are two of a kind and will never give up no matter what is thrown their way.

More like this
Naomi Osaka & Emma Raducanu’s Experiences Have Inspired A New Amazon Show
By El Hunt
Lewis Hamilton Turned Down A Role In 'Top Gun: Maverick' For This Surprising Reason
By Darshita Goyal
Harper Teasing David Beckham’s Dad Dancing Is Beyond Adorable
By Frances Stewart
The Spice Girls & Adele Lead Girl Power Celebrations For Lionesses’ Euros Win
By Sophie McEvoy
Get Even More From Bustle — Sign Up For The Newsletter