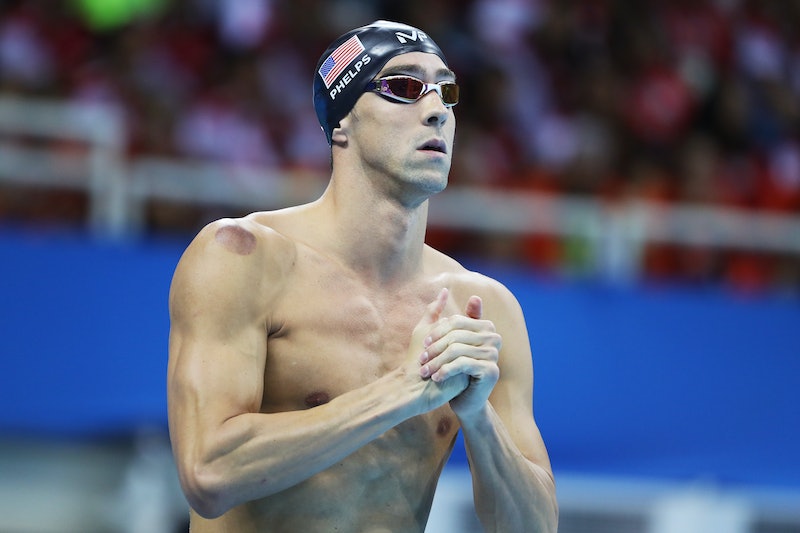 Michael Phelps recently earned his 19th gold medal at the Olympics in Rio when he helped his team win the 4x100-meter relay, but that's not all his fans were paying attention to. When Phelps took to the water, people quickly noticed purple circles on his right shoulder and back. This isn't a new trend athletes are flocking to — Phelps is using cupping therapy, an ancient Chinese healing practice, to treat sore muscles. But does Phelps' cupping therapy strategy have concrete benefits?

The 31-year-old swimmer has reportedly been receiving cupping therapy for years. Cupping involves placing glass or plastic cups on one's skin in places where it's sore and then using either heat or an air pump to create suction between the cup and the skin. After a few minutes, the capillaries just under the surface of the skin rupture — that's where the circular bruises come from. It's unclear, however, whether this works on a scientific basis.

The most widespread belief is that cupping functions by drawing blood to the sore areas in order to make those muscles heal more quickly. But Leonid Kalichman, a senior lecturer at Israel's Ben-Gurion University of the Negev, told The New York Times that cupping may also cause a person's immune system to produce small proteins called cytokines, which can strengthen their immune response to injury by improving communication between cells.

Back in 2012, the The Wall Street Journal published an article in which it discussed several preliminary studies about cupping. In one study, cupping was found to reduce knee arthritis pain, but the lack of a control group caused scientists to question whether cupping was operating as a placebo, rather than as an effective treatment.

In a number of other studies, too, the placebo effect has made it difficult to determine cupping's efficacy. A treatment that has largely been popular in East and Southeast Asia, cupping is now spreading to North America and Europe, and many athletes swear by it. But there is just not enough research available to affirm its benefits, and there may be a primarily psychological component to its use.

That being said, the placebo effect can still be useful; after all, it seems that cupping does relieve pain for some people, whether for psychological or physiological reasons. As Phelps' personal trainer, Keenan Robinson, pointed out to The New York Times, "We know that science says it isn't detrimental. We know that science says it does in some cases help out. So we're at least going to expose the athletes to it years out so they can at least get a routine into it."