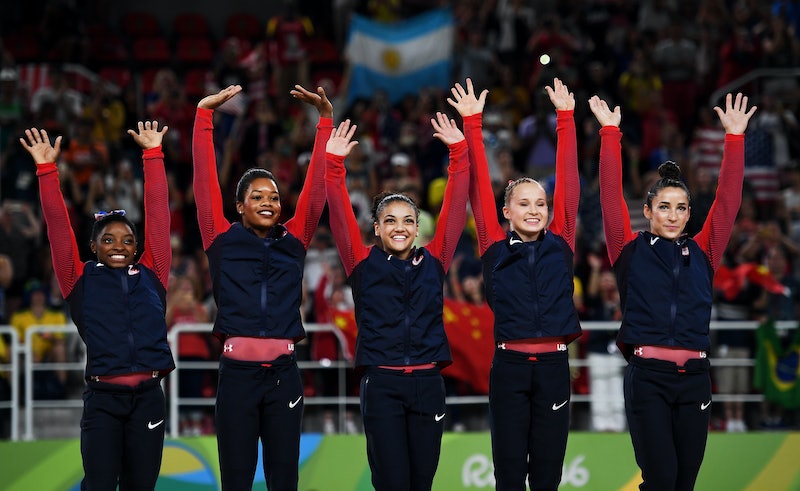 Please tell me I am not the only one who is a total sucker for nicknames? Maybe it’s because I have a name that hasn’t exactly lend itself to a number of cute alternatives throughout my life, but I think it is absolutely adorable when people come up with nicknames for each other, for themselves, and for the organizations that they’re apart of. So when the 2016 U.S. Gymnastics team announced their nickname on Tuesday, declaring once and for all that they are the Final Five, I had to wonder: Do U.S. Gymnastics teams always have nicknames? I want this to be a thing forever if it can be.

This year’s gymnastics team picked their name for a reason: Starting in 2020, gymnastics teams will be limited to only four players, so choosing the Final Five as a name makes complete sense. They are the final group of five gymnasts to represent any country in the Olympic games, but that doesn’t mean they’re the only team that has decided to name themselves something catchy.

The first gymnastics team to give themselves a nickname was the Magnificent Seven, the team of female athletes at the 1996 games that led America to gymnastics gold for the very first time. That team was epic. With huge names like Dominique Dawes, Dominique Moceanu, and Kerri Strug, there’s a reason why this team dubbed itself the Magnificent Seven. They were a force to be reckoned with on the home turf in Atlanta, GA. That year’s team included Strug’s infamous vault that she landed on one leg. These girls were absolute legends.

After the ’96 games, however, there wasn’t another team with a nickname until 2012. The Fierce Five stepped out of the shadows to take the gold again in London and gave themselves the nickname that no one would soon forget.

So that seems to be the real tradition: A team doesn’t give themselves a nickname — or at least they don’t share their given nickname with the world — unless they win the gold medal. The only three American gymnast teams that have won gold are the only teams that have had nicknames.

So let’s all cross our fingers that the U.S. team can pull out another win in 2020. I want this nickname tradition to continue.