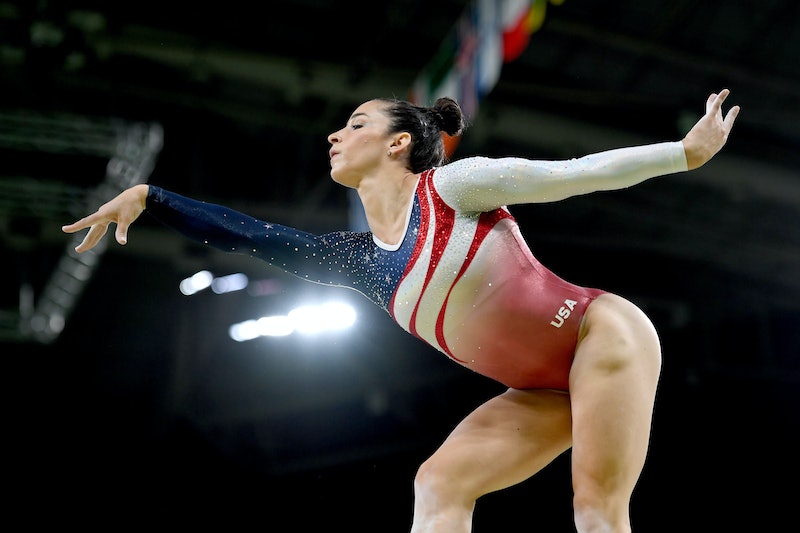 It was an exciting day for USA in the Olympics on Tuesday — the gymnastics team took home the gold with a winning lead margin of over 8 points. This is a big lead as Russia came in second with China in third, a margin of around 0.5 points between them. There's been a lot of Simone Biles mentions amid the crazy "USA! USA!" chants in the Olympics so far and while she most certainly exceeded expectations, gymnast Aly Raisman's performance on the floor cannot and should not be missed.

The gymnastics finals began in the afternoon, and the "Final Five" pushed themselves to achieve another historic achievement: consecutive gold medals. How it works is the top eight countries from the preliminaries choose their strongest for each of the events. Team USA's lineup consisted of its five gymnasts: Raisman, Biles, Gabby Douglas, Laurie Hernandez, and Madison Kocian.

But when it comes to the all-around individual women's gymnastics finals airing on Aug. 11, the top two from each country will compete in the finals. So watch out for Biles and Raisman representing America and conquering the floor (and vault and beam and everything else) in a few days. Unfortunately, Douglas won't be defending her title as the all-around champ.

Watching Raisman's routine is enough to stop your breath. There's a quick succession of movements, from graceful tumbles to snappy foot and handwork. But the most breathtaking aspect of her floor routine today was the absolute dazzle of cartwheels across the mat. It's no wonder her parents watch her perform such intricately crafted aerial art with both nervous breath and wonder.

What makes the floor routine so enjoyable to watch is the back and forth between gymnastic feat and dancer form — it's exhilarating to watch Raisman seamlessly catapult into the air to land with a playful flex of her arm. For each event, there are various distinguishers that lend to its unique execution, and when it comes to flawless floor routines, the drama and artistry of dance coupled with gravity defying jumps are what makes floor routines special to watch. And today, with a routine that scored a 15.366, Raisman not only beat her qualifying score — she showed us all just how it's done.

To round up an amazing day of gymnastics, here's how the five Olympians fared: Hernandez scored a 15.100 on the vault but was beat out by Raisman's 15.833 until Biles took it home with a 15.933 score. Kocian led with a bar score of 15.933, which kept America in first place. Hernandez finished the third rotation on the beam with a score of 15.233. And the last rotation on the floor, Raisman got a 15.366, and Biles helped secure the gold with a 15.800 score.

As it goes, all in a good day's work.