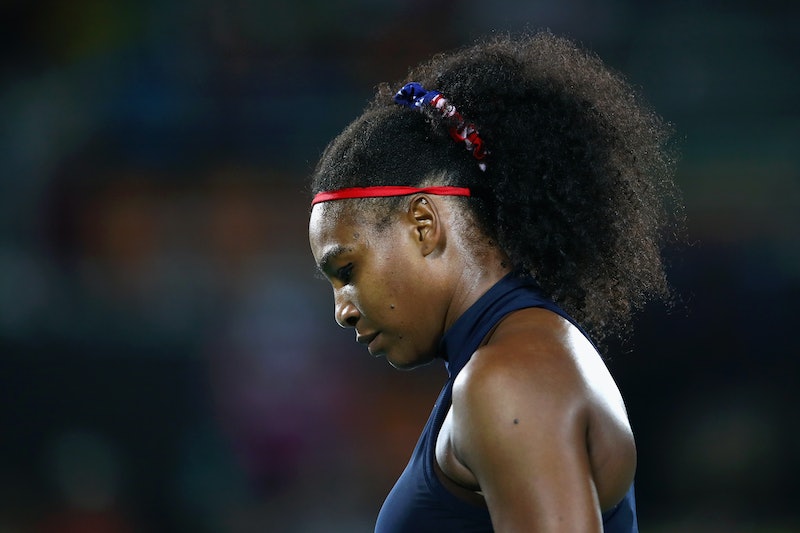 At the Rio Olympics on Tuesday, Serena Williams lost in straight sets to Ukraine's Elina Svitolina in third-round singles. This was two days after she and her sister Venus lost an Olympics doubles match for the first time ever, and three days after Venus lost her own singles match. But Serena Williams' Olympic loss isn't just heartbreaking; it also speaks to a changing Olympic tennis landscape.

The Williams sisters had never lost a doubles match at the Olympics before. They are three-time doubles gold medalists. However, that changed this year, when they lost to the Czech Republic’s Lucie Safarova and Barbora Strycova, which definitely came as a shock. But when Serena Williams, the defending singles champion, lost her match on Tuesday, it was probably one of the biggest upsets of the 2016 Summer Olympics thus far. As she often is, Williams was the favorite to win, whereas Svitolina was making her Olympics debut.

Williams and her sister were not the only ones to shock tennis fans around the world. Novak Djovokic also lost a singles match in straight sets to Argentina's Juan Martin del Potro. For both the men and women's no. 1 players to be ousted in the Olympics is a strong indication that the global tennis landscape is changing, and that some promising new players have entered the fold.

There is no doubt that Williams is one of the greatest tennis players of her generation. Her loss does not change that; it's not like she has never lost before. She has shattered barriers for women — especially women of color — in sports. But her singles loss at the Olympics presents an important opportunity for the eight women who remain. The top-seeded player among them is Germany’s Angelique Kerber, who has beaten Williams in the Australian Open, but lost to her at Wimbledon.

During the match against Svitolina, Williams appeared to be in pain from a shoulder injury, but she played through it, as she always has done. However, there's more to this loss than an injury or a gold medal. This could possibly be the Williams sisters' last Olympics, which makes it a particularly emotional moment. The next time we see Serena Williams will likely be at the U.S. Open at the end of the month, where she will have a chance to avenge her 2015 loss in the semifinals. But an Olympics loss is different from a U.S. Open loss, especially since there's always another Grand Slam tournament 90 days away.

While Williams' loss was certainly heartbreaking, it doesn't change her legacy, and it doesn't make her any less skilled as a player. She's still the no. 1 seeded player in women's tennis, and while these Olympics have not been kind to such players, they certainly have not crushed Williams' spirit.

“Obviously, I’m disappointed, but she played really well and I think the better player today won,” Williams said after her match against Svitolina. “But I can’t wait for next time, and I know next time is going to be a really good match and I look forward to it.”

Williams' attitude toward her loss is admirable, and the nation still can't wait to see what she does next.

More like this
Serena Williams Is Retiring From Tennis: “I'm Ready For What's Next”
By Marina Watts and Grace Wehniainen
The Lionesses Are Calling For Equal Access To Football In Schools
By Sophie McEvoy
The Spice Girls & Adele Lead Girl Power Celebrations For Lionesses’ Euros Win
By Sophie McEvoy
Even The Royal Family Can’t Get Over Alessia Russo’s Backheel Goal For England
By Maxine Harrison
Get Even More From Bustle — Sign Up For The Newsletter