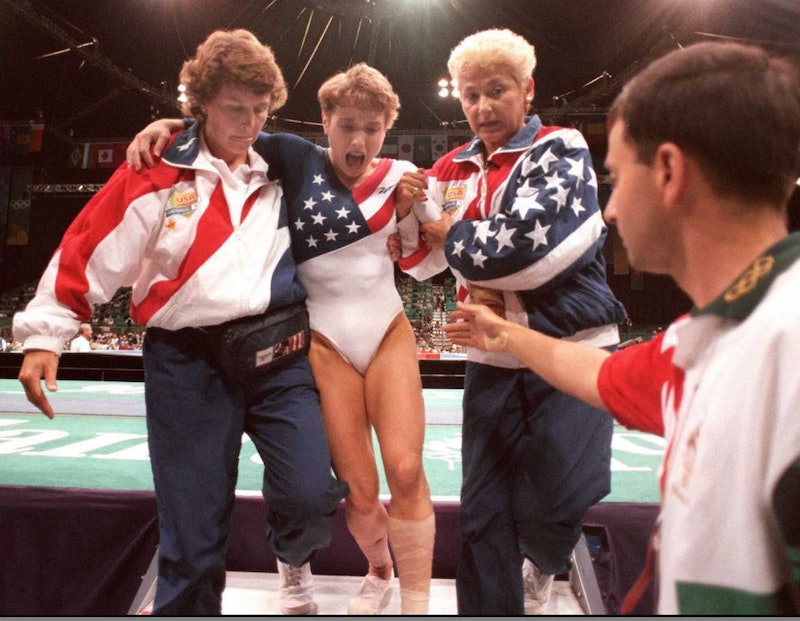 Even though American gymnasts at the Olympics may bring home the gold on the uneven bars, rings, or beam, gymnastics is not solely an individual sport. The team's scores are aggregated, and the competing countries' teams are scored against one another. Gymnastics heavyweights like the United States and Russia have often vied for supremacy at the games. Sometimes, the scores are so close that it can come down to just one athlete. Back at the 1996 Atlanta Games, that's what happened. The U.S. lead had evaporated, and it all came down to Olympian Kerri Strug, who competed with a broken ankle.

Rick Weinberg of ESPN explained what led up to her big moment. Team USA was nearing the end of the gymnastics competition, and they were way ahead of second-place Russia. Evidently, in gymnastics, 0.897 is a huge number to lead by. But then it was time for the vault, and Dominique Moceanu, one of the top gymnasts that year, fell not once but twice — and the falls were pretty severe. Her score was so low that the lead of the American team was then in doubt. That meant it was up to Strug — someone for whom there were far fewer expectations entering the competition.

Team USA made a video about the moment for the 2012 Games. "Going into Atlanta, we knew we had a strong chance at winning gold," Strug explained. Then at the competition, "I just heard this uuhhhh by the crowd," Strug said. "Then I looked up, and saw in the huge screen that Dominique had fallen on her first vault. I was kind of taken aback, because Béla's girls will maybe have a little wobble or a high up or a step, but they usually don't fall." (Béla Károlyi was Moceanu's coach and was well-known in the sport for training top-tier athletes.)

But again, there was no problem if she landed the second one. Moceanu didn't. "I was flabbergasted when she fell yet again," Strug said. And now it all came down to Strug — who, to be fair, was the best vaulter on the team. "My other teammates had done their job. I had two chances. I just needed to make one vault," Strug said. But she also fell. And then the announcers noticed that she seemed to be hurt.

"When I got up, my left ankle felt a little strange," Strug said. But she tried to convince herself she was OK. "Whatever is in my ankle is going to go away, it has to. It's the Olympics." She walked to the starting line, and Coach Károlyi told her, "You can do it, you can do it!" It worked. She was motivated, and off she went. She flipped into the air, twisted, and landed nearly perfectly — except that she landed almost perfectly on both feet. She quickly raised her injured ankle behind her. She turned to face the judges, and then fell on her knees, the pain too great.

In the end, she had two torn ligaments. The trip to the hospital was postponed just long enough for her to receive her medal with her teammates. "To this day, I remember the National Anthem playing and being up there with my teammates thinking to myself, 'This is what you've always wanted,'" Strugg said.

This year, there's a good chance for the American gymnasts. Wish them luck, and may no one need to compete while injured. Despite the win, I'm betting Strug would not recommend it.