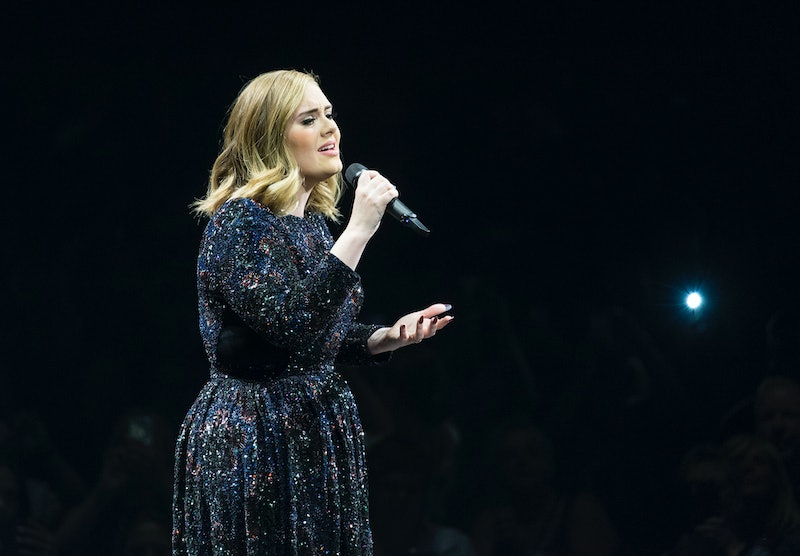 I never like to jump on the rumor train too quickly, especially when it's a rumor I like and that might get my hopes up. So, when I heard that Adele might perform at Super Bowl LI in 2017, I had to sort the odds. I'd surely never come back from a disappointment so great. I mean, think of Adele belting out "All I Ask" and making two teams full of burly football players openly weep. I couldn't possibly dream of more scenarios without having some hard and fast evidence.

As per The Sun, via an "NFL source," the only reason the singer's performance isn't a sure thing is because of her "nerves." They explain that,

There is nobody bigger in the world than Adele right now and organizers are doing absolutely everything they can to try to persuade her to sign up. She’s sold out every date on her tour, everyone wants a piece of her and they know they can bank on her bringing in the viewers.

Listen, I know that some rumors are better than others in the way of conviction, but this one seems legit in the fact that well... they aren't wrong. There really is nobody bigger than Adele right now except, of course, for Beyoncé, who the publication points out did the honors last year.

It's whether or not this performance is even possible with her tour and various other engagements that gave me pause. According to her website, the last Adele Live tour date is on November 15 in Mexico City. Which, technically leaves her schedule wide open for her to appear at Super Bowl LI on February 5, 2017. In fact, it would make even more sense for her to be hanging out in the U.S. around that time, considering that the Grammy Awards are on February 12. We all know that Adele and the Grammys go together like peanut butter and jelly. She has 10 of them, after all.

To add more ammo to this theory, last year Adele even did a pre-Grammys show in L.A. Being that the Super Bowl is in Houston, Texas, I don't think it's too far out of the realm of possibilities that the singer would just hop on a quick flight to California afterwards to start her award show prep. With a mere week between the events, and knowing that Adele has done some Grammy-inspired shows in her brief downtime in the days before the show starts, I'd say that this Adele half-time show Super Bowl speculation is actually pretty on point. You know, barring any other major commitments she has planned but hasn't yet made public...