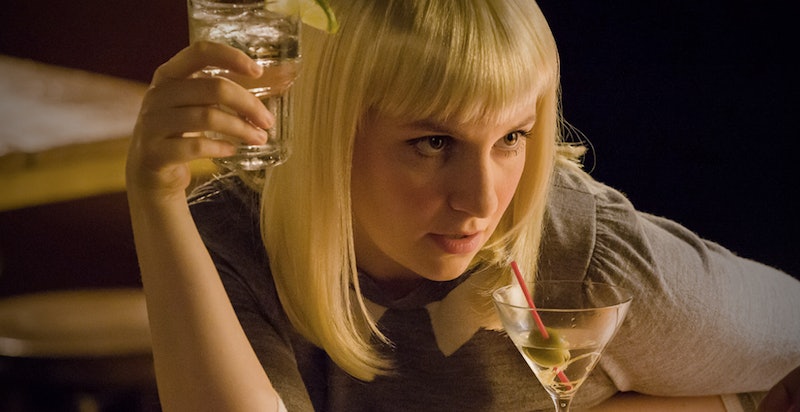 Is it normal to commiserate with Hannah Horvath as much as I do? Her cerebral approach to sex on this Sunday's Girls (spoilers!) really struck a chord with me. That's not to say that I totally related to the elaborate sexual fantasy she concocted, in a showy bid for Adam's attention — although, to be fair, I've done equally crazy things for sex and attention.

But my Hannah-is-us moment actually came later, when Hannah's role-playing narrative veered off tracks mid-coitus. Instead of a hot-and-bothered hedge fund investor's neglected wife, she was now a hot cheerleader fucking the school weirdo, she informed Adam. Irritated by the script switch-up, Adam flipped out at Hannah for, probably, being the worst kind of hyperaware narcissist. When Hannah pointed out that Adam has also said and done some off-kilter things in bed, he snapped, "Jesus, Hannah, the second I come I have no idea what the fuck I just said, but you are outside yourself. You are outside your body watching everything."

Not to go all Carrie Bradshaw on you, but that whole exchange set me to thinking about role-playing, and the role Hannah has really been playing, often unconvincingly, throughout this season and previous seasons. It's one that I've played many times, in bed and elsewhere, and one that I think a lot of women play on the reg. It's the the Cool Girl character, or some riff on it. As defined by Gillian Flynn in Gone Girl:

...Cool Girls are, above all, hot. Hot and understanding... There are variations to the window dressing, but [she] is basically the girl who likes every fucking thing he likes and doesn’t ever complain.

For Hannah Horvath, being Adam's Cool Girl once meant playing along with his aggressive sexual kinks — always being game, hiding her discomfort. Now, it's more about suppressing her own insecurities to appear supportive of Adam's first big acting gig; sexually, this has translated to Hannah enduring "sweet" sex (Adam's words) that makes her feel like "an ottoman with a vagina" (Hannah's). So, when Hannah shimmied into that lace harness and pinned a blonde wig on, it wasn't the financier's wife she was trying to evoke, but the Cool Girl that, she thinks, Adam fell in love with. And really, isn't that Cool Girl performance about a million times more preposterous than a lusty pizza delivery girl, or a naive French maid?

Both the text and subtext of Adam's outburst is telling. It elucidates his ability to lose himself in the moment with Hannah and other women; his fantasies are un-self conscious and stream-of-consciousness. It's not like that for Hannah, and, I would argue, for many women. In fact, I think the ability to be in the moment during sex is something of a male privilege. That's not to say that women can't enjoy sex or that women can't ever live in the moment — just that we're socially conditioned to perform.

In my experience, at least, even when I'm enjoying myself, I'm aware that I'm on stage. Maybe this is your experience, too. Maybe you don't fake orgasms, but you moan a little louder than you need to. Maybe you say "I love that thing you're doing with your tongue," when in fact you are sort of whatever about it. Maybe you sext even though you're really not that into it. Cool Girls do these things. Cool Girls want to make dudes feel like rock stars.

Attempting to be the Cool Girl at a party or on a date might not seem like a big deal, but power dynamics tend to seep through social compartments. When that attitude carries over to sex — as it easily could, and often does — it's a problem. Like, how many times have I agreed to a sex act, or even requested something from a partner, that honestly doesn't do it for me? I have a checklist of things that turn me on, but how many of those things genuinely turn me on, and how many of those have I convinced myself I'm into, because being down with such things makes me seem irreverent and naughty and chill?

I think that's the messiest, scariest thing about the Cool Girl role, when it comes to sex and love — it's heady, all of this disassociation and othering. It's way too easy to slip into the persona and lose sight of who you really are, and what actually turns you on. During her fight with Adam, Hannah struggled to articulate what she wanted in bed, beyond wanting to want what Adam wanted.

And, though it's hardly a feminist manifesto on my part, I really related to Hannah's inability to assert her sexuality, or even to know and understand it. Because, if I'm being honest with myself, I think that I really get off on isn't sex, or oral, or my odd little medicine cabinet of kinks. Being the Cool Girl might, in fact, be my number-one turn-on — and I'm guessing that I'm not alone in that.