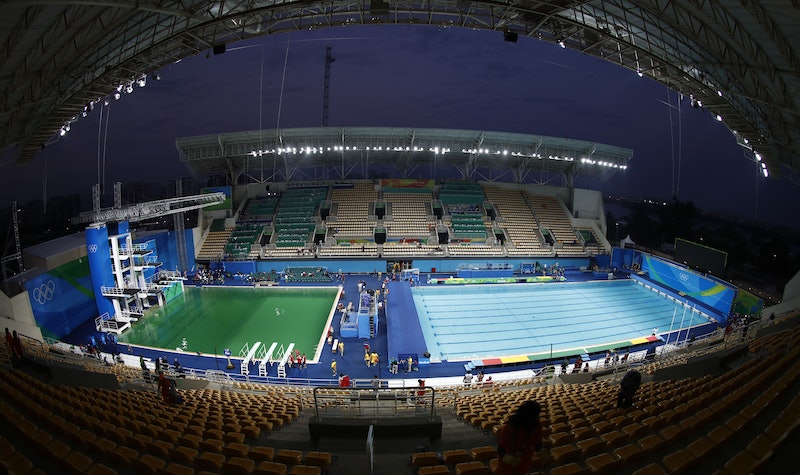 So far, the Rio Olympics has faced its fair share of challenges. But perhaps the most glaringly noticeable one so far happened on Tuesday when the diving pool in the stadium just turned startlingly... green. Tom Daley first tweeted about it and as per the nature of the internet, Twitter exploded with funny memes about the green Olympic pool.

This green color was jarring when compared to the clear blue it was on Monday, which prompted an explosion of possible theories including urine, algae, and oxidized copper. And while it was initially reported that it was "a proliferation of algae," the Fédération Internationale de Natation (FINA), also known as the International Swimming Federation, released a statement saying it was actually due to a lack of chemicals to treat the water. The statement read:

FINA can confirm that the reason for the unusual water colour observed during the Rio 2016 diving competitions is that the water tanks ran out some of the chemicals used in the water treatment process.

As a result the pH level of the water was outside the usual range, causing the discolouration. The FINA Sport Medicine Committee conducted tests on the water quality and concluded that there was no risk to the health and safety of the athletes, and no reason for the competition to be affected.

Rio has been facing some trouble with its water outside the swimming pools as well, but so far it hasn't affected the aquatics stadium. And since the green diving pool has been confirmed to not be a health risk, Olympians and audiences are finding the whole situation both absurd and hilarious. Tom Daley started off the trend on Tuesday with this tweet:

British diver Tonia Couch complained that the water was so murky, she couldn't find her partner underwater.

But China's gold-medal winner, Liu Huixia, said the green water didn't prove to be much of a problem, as she told Reuters:

When we were practicing to get used to this venue (the water) was always sky blue. ... But we're always mentally prepared for unexpected situations.

She took home the gold with partner Chen Ruolin on Tuesday.

Still, it proved to be a puzzling and entertaining moment in the Olympics and soon, the memes from watchers around the world started pouring in.

Meanwhile, keeping in tone with the memes and tweets, Wired came up with a few possible reasons for the fluorescent green water and they're pretty hilarious. Could it be that Donald Trump's pool cleaning ads don't deliver on their promises? Perhaps it's just plain old Brazilian pride? Even though everything is fine and it's just a water treatment plan gone awry, it didn't stop Twitter from poking a laugh at another mishap in this year's summer Olympics.