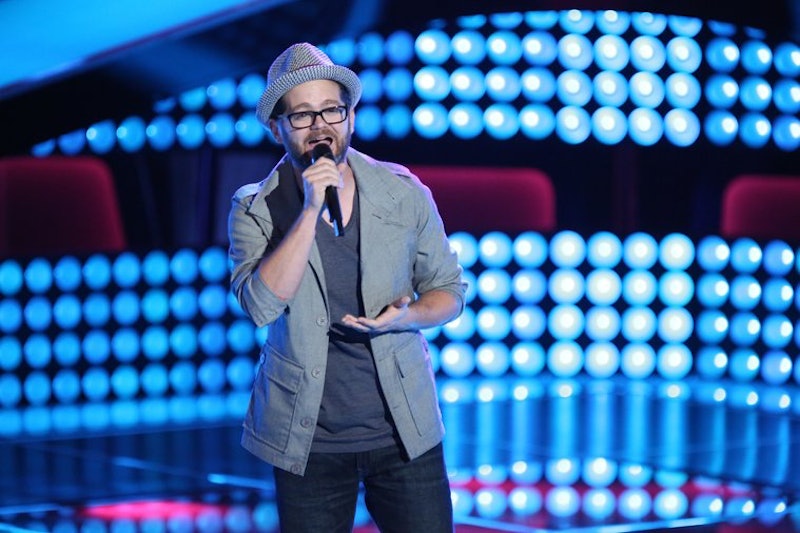 We're getting down to the nitty gritty of The Voice Blind Auditions. Each team only has a few slots left, so Blake Shelton, Shakira, Adam Levine, and Usher are being extra choosy. They're hovering their hands over their buttons a little longer. The impulse chair turns are few and far between nowadays. Things are getting REAL. In fact, I bet Carson Daly is already mentally preparing for the live shows. He knows they are just around the river bend. You can never be too prepared for live TV, right Carson?!

Monday night's highlights? I liked Jake Barker (the guy who'd never sung in front of an audience before) and Cierra Mickens (she and Shakira had "girl talk" during the deliberation segment) a lot. But there was one contestant who really stood out in the coaches' eyes. A contestant who nabbed four chair turns. And that contestant was Josh Kaufman.

Josh is a father of three and a working musician. His wife and kids are very adorable, and he seems like could very well be the sweetest guy on the planet. He went to school to get his Masters in Philosophy, but realized his heart was not in it. So, he made a decision. And that decision was: out with the Kant, and in with the music. He also tutors on the side, because dude's gotta make that extra cheddar.

Josh sang George Michael's "One More Try", which, wow wow wow. I was FEELIN' that song choice and his voice. His voice is really incredible. He barely finished the first line of the song, and BAM. Adam hit his button. I totes get why. There was something really magnetic and interesting about his sound. It has such a bluesy and dynamic quality. He did some very impressive things with his voice, but never once did it sound like he was trying too hard. You know how some people will get on that stage and go nuts because they are on a singing competition show? Those people who are noticeably nervous? Josh is not one of those people. He just did what he does, and what he does is effortless as all get out.

Blake, Shak, and Usher hit their buttons, too. But Adam refused to lose this round. Adam stood up while Josh sang and he didn't sit down until he was finished. Classic Levine move. Showin' that support. Adam said the performance gave him goosebumps. Classic Levine move. Talking about skin. (Proaaaactiv!)

Shak wasn't about to let Adam run away with this contestant, however. She told Josh that he’s the artist she’s been waiting for.

Wait. WAIT. WAIT! I hate to put Shakira on blast, but she has definitely used that line before. I know she has.

Who did she say it to? My memory is a tad foggy, so I consulted my notes. And survey says: Shakira also told Delvin Choice that he was the singer she's been waiting for. Uh oh.

Shak, I expected something like that from Blake or Adam (they're such schmoozy dudes), but not you. You're Alexander the Great. You're too good to recycle pickup lines. (And yes, I'm referring to the coaches' sales pitches as "pickup lines" from here on out.) Ah, who am I kidding? You are still perfect, Shak.

In an unsurprising turn of events, Josh chose Adam. Can't wait to see what/how Josh does in the upcoming rounds! Watch his audition here: