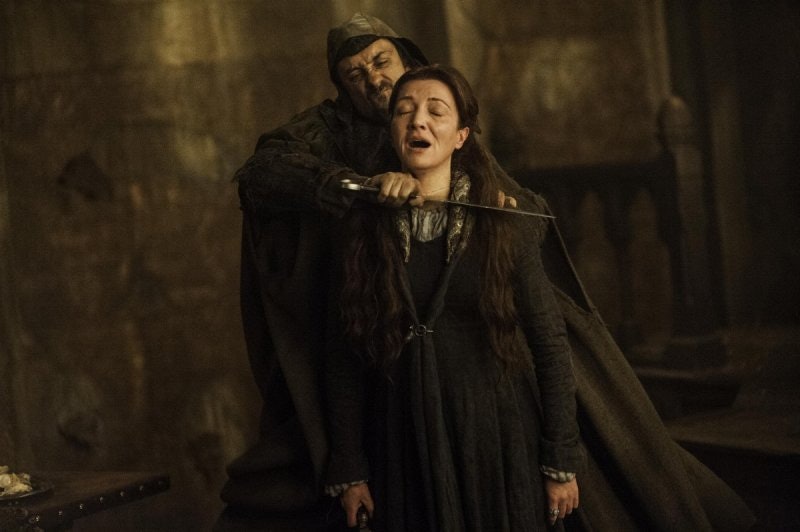 Arguably, every single episode of Game of Thrones is pretty great, but there are always a select few within a season that manage to stand out among the rest and prove just how truly unpredictable this show can be. For Game of Thrones Season 6, it was in the final two episodes "Battle of the Bastards" and "The Winds of Winter." But for me, there will still always be one episode in particular that will forever be ingrained in my memory, whether I want it there or not. I'm referring of course, to the Game of Thrones Red Wedding episode, which (spoiler alert) saw the murder of both Catelyn and Robb Stark — along with a ton of other wedding guests — at Walder Frey's castle.

It was a devastating scene for book and non-book readers alike. In fact, it made me completely forget anything else that took place throughout that entire episode, (Seriously, I can't remember a thing.) Which is why I decided to gather up my courage, make my way to Season 3, Episode 9, and rewatch the Red Wedding episode ""The Rains of Castamere." Naturally, it was even more terrifying the second time around since I had to wait around practically an entire hour with the knowledge of the horrors that were coming. But it also made me notice a few things I hadn't before during my initial viewing, so, of course, I have some thoughts about it. Such as...

Right away the episode opens on Catelyn & Robb discussing military strategy. It's almost like the writers were trying to warn us from the very start that these two were about to be in some serious trouble. (Please note: screaming out warnings to them does not change the outcome. I checked.)

2. Where Did They Get All Those Wooden Chess Pieces?

Did someone seriously take the time to make these miniature military figures representing each perspective house? Does every house have them? Are they also used to play actual chess? Someone please explain this to me because I'm honestly fascinated.

While trying to figure out what their next move should be, his response to one scenario was: "We'll lose the war and die how father died or worse." Yeah, "or worse" seems pretty accurate to me.

Oh Grey Wind, I tremble at the thought of what's going to happen to you.

6. Walder Frey Has Too Many Offspring

When you can't even remember one of your granddaughter's names due to sheer volume, I'd say enough is enough. (Also, what a jerk.)

7. Walder Frey Really Needs To Stop Talking. Like Ever Again.

During his inspection of Robb's wife, Talisa, he remarks: "I can always see what's going on beneath a dress," along with some other derogatory comments. Umm, OK, creeper.

Prior to Michiel Huisman taking over the role, the character was portrayed by Ed Skrein at this point in time. Personally, I prefer Huisman's scruffy appeal, but I can't deny that this version is pulling off some very lucious locks.

I didn't realize how much I missed his calm and sturdy presence until right this moment. Great, now I'm even more depressed. (RIP forever.)

10. Gilly Called Sam A Wizard & Now I Can't Help But Compare Him To Neville Longbottom

Can someone get J.K. Rowling and George R.R. Martin to work on a crossover ASAP?

11. Arya Is Still So Innocent

She even stopped the Hound from murdering this random guy on the road. What a great bonding experience for all.

Maybe not so innocent after all.

And now we know what it means. I just CAN'T, you guys. I just can't.

14. It's So Weird Seeing Tormund & Jon Not On The Same Side

This was back when Jon was pretending to be a Wildling, so their bromance wasn't in full bloom yet.

The man she loved just betrayed her. We've all been there, my friend.

16. Is This Really One Of Walder Frey's Daughters/Granddaughters?

She wasn't present during the earlier naming process. Was she just out taking a walk or was she merely a pretty prop to further distract the Starks and Tullys from what was about to take place?

"The Umbers are our banner men," Bran tells Rickon. They'll protect you." Right. And we all know how that turns out, with the Umbers handing Rickon over to Ramsay Bolton.

18. The Bedding Ceremony Is Ridiculous

That is one tradition that deserves to be broken, and the fact that Ned forbid it from happening on his and Catelyn's wedding night is only further proof of what a great guy he really was.

I completely forgot that Talisa wanted to name their child Eddard Stark if it was a boy. That makes what is about to happen all the more cruel.

20. Arya Is So Close To Her Family

Things are about to go horribly wrong.

21. Catelyn Could Sense Something Was Wrong

Oh god, that guard just locked the doors and The Rains Of Castamere song is starting to play.

Everything else happened so fast after that I didn't get to fully appreciate it before.

23. The Look On Walder Frey's Face Is Despicable

From the moment Talisa's pregnant stomach was stabbed to full-out massacre that ensued, Frey looked like he was watching his favorite movie play out before his very eyes. Ugh, this guy.

24.Grey Wind's Death = When I Lost My Damn Mind

Seeing him close his eyes after being shot with arrows... I'm not crying, YOU'RE crying.

25. Catelyn's Is Such A Badass

Her plea to Walder Frey didn't work, but she really did everything she could to try and save her son. It makes me want to see her come back as Lady Stoneheart all the more.

Roose Bolton, I am so glad you are dead.

All in all, this episode was just as brutal (if not more so) than I remembered it. Now, if you'll excuse me, I need to go see my therapist aka ice cream.