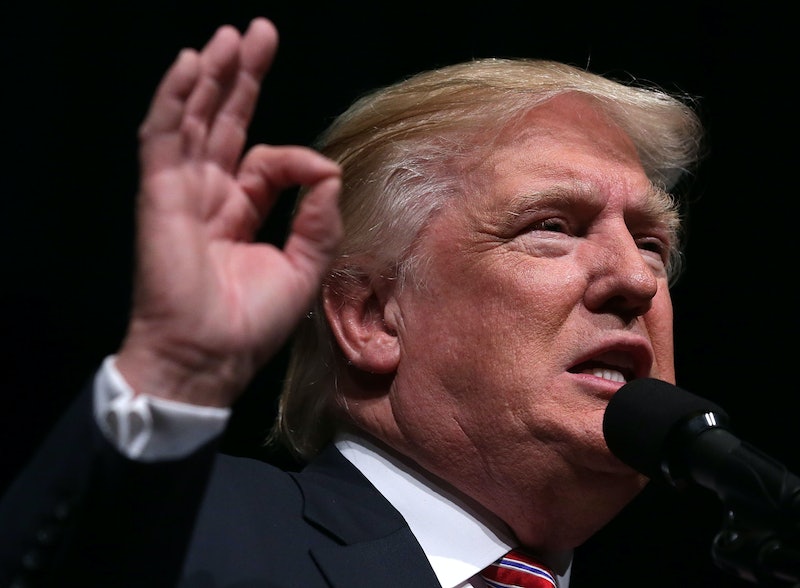 The Republican Party might be showing small signs of sanity reasserting itself. a poll released by Reuters/Ipsos on Wednesday showed that nearly 1 in 5 Republicans want Donald Trump to drop out of the race. This latest gut-punch of a poll comes after a week of ugly numbers for the GOP nominee. In a Fox News poll from last week, only 15 percent said Trump was “very qualified” to be president, and only 43 percent said he was qualified at all. (Conversely, 40 percent of respondents said Hillary Clinton was "very qualified," and 65 percent said she was qualified at all.) But the fact that a fifth of his own party want him to drop out of the race is possibly unprecedented.

Although my first instinct is to say “You’re only figuring this out now?,” I’m going to try to be magnanimous and not worry about the fact that these Republicans are a little late to the party. Instead, I'll celebrate that they decided to show up at all. In many ways, this late-in-the-game come-to-Jesus moment that GOP voters seem to be having with themselves is frustrating — there was a way to avoid all this: it’s called voting not for Trump in your primary.

On the other hand, it’s flushed out some of the uglier facets of the Republican party for all to see — your racists, your misogynists, your anti-Semites — and is forcing a kind of political intervention on America. In many ways, as nauseating as it was to watch the RNC’s fear-speeches, read the anti-LGBTQ planks of the Republican platform, and listen to the bile coming from their nominee’s mouth, it was helpful for us to be reminded how, for better or for worse, the Republican party has in many ways become the party of hatred and fear.

This doesn’t mean that the Democratic party has automatically become the party of love and bravery. With a candidate like Hillary Clinton — who I support but is ultimately a political animal — we, Democrats, must remain vigilant about our party, as well.

There’s another, less obvious reason why this poll is a huge elephant in the room (yes, pun intended): it signals that there may be something is amiss with our primary system. If the nominating contests are yielding a candidate that a fifth of its members not only don’t like, but aren’t even willing to tolerate, then the mechanism for choosing nominees could be fundamentally flawed. I’m not sure what the fix is: national primaries to promote higher turnout? Shorter election cycles that don’t benefit people with black-hole-levels of media gravity? More superdelegates?

This problem doesn't just hold for Republicans. Clinton has been a historically unpopular presidential nominee, as well, and she came up through a largely similar primary system. And while Democrats may want to cheer the possibility of Trump dropping out, they should think twice. Clinton couldn’t ask for a better opponent. Facing off with a more talented politician could be her downfall.