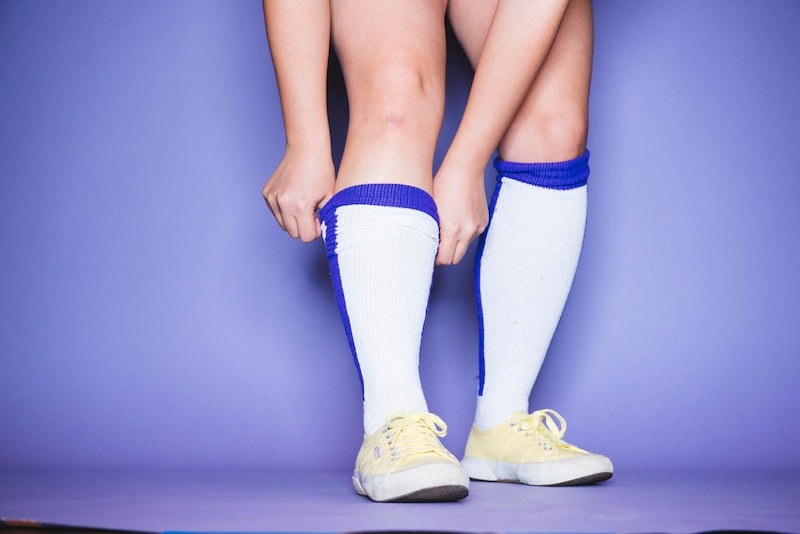 If you’ve been jogging regularly a few times a week, or have just recently dipped your (admittedly new) sneakers into the sport, chances are you have already started feeling some of the benefits of running -- like an improved mood, higher self-esteem, and stronger muscles. I know that even after I’ve had a terrible day, a good run or workout can instantly improve my outlook on life, boost my confidence, and make me feel 10 times better than I did before lacing up my running shoes. I guess endorphins from working out really do make you happy!

Unfortunately, simply adopting the habit of running doesn’t instantly set you on a fast track to fitness success. While there’s no doubt that running has proven, scientifically-backed physical and mental advantages, it’s not all endorphins and rainbows. There’s many opportunities to unintentionally sabotage your run, from trying to set a faster pace than you can handle, to wearing the wrong shoes. It doesn’t matter if you’re a veteran with multiple marathon medals at home, or a newbie looking to finish your first 5k: we’re all susceptible to a variety of common mistakes that could make running more difficult, or even lead to injury. To help your running career go a lot more smoothly, here are 13 things you might be doing that are sabotaging your run.

If you run all the time, you can eat whatever you want, right? Wrong. Matt Wilpers, a Road Runner's Club of America (RRCA) -certified run coach and co-founder of mobile fitness app CoachCasts, finds that many runners seem to think that they can eat whatever their heart desires after a hard workout. Newsflash: You can’t!

“Maintaining a well-balanced diet ensures that your body will be properly fueled and that you will have the best chance of feeling good during training and races,” Wilpers says. “... Pay attention to how your diet affects your training and if necessary, speak to a nutritionist and/or your physician for help.”

A common mistake Marnie Kunz, RRCA-certified run coach and founder of Runstreet, often observes in all levels of runners is training at the same intensity every day.

“Advanced runners who don't have any formal running training often try to go hard every day, which results in injury and burnout -- and hinders progress,” Kunz explains. “New runners often settle into a comfortable ‘easy’ pace and do the same pace and distance every day. This is great if you want to maintain your fitness level, but if you want to get faster or run further, you will need to incorporate ‘hard’ workout days, such as longer runs and speed workouts.”

Sure, it may be called, ‘running,’ but there's no shame in taking walk break every now and then -- especially if you’re new to the sport. Mile High Run Club founder and RRCA-certified run coach Debora Warner often sees newbie runners expect to run specific distances without building up to it, which can turn into a fast track to failure (and thinking that running is impossible!).

Warner advises newbies to slow down to a walk, and/or take breaks during a run until they build a solid aerobic base. Once that base is built, it’s safe to attempt tackling multiple miles at a time without stopping.

Wilpers sees far too many runners skimping on their much-needed shut-eye.

“The more stress you place on your body with training, the more important sleep becomes a part of your recovery,” Wilpers explains. “If your body does not heal and recover from workouts, you continue to break it down without ever fully absorbing and benefiting from previous workouts. Listen to your body and allocate more time to sleep if you are feeling tired.

Whenever a runner approaches Wilpers with aches and pains in their legs, one of the first places he looks for clues as to what's wrong is their footwear. Training in shoes that are many months, or even years old could be causing injury or discomfort.

“I encourage runners to go to a local running store -- one preferably managed by runners -- have them recommend various shoes to try out, and then select the shoes that feel the best and not necessarily look the best,” Wilpers explains.

6. Wearing Running Sneakers For Other Activities

“Usually, running shoes are good for 300 to 500 miles,” Wilpers says. “If you wear the shoes around casually [when you're not running], the mileage range is reduced. This is because running shoes lose shock absorption ability with use and can change shape.”

Another error Kunz often sees runners make is not following the principle of progressive overload to gradually build up distance and intensity.

“A general guideline for safely adding distance to your run is to follow the 10 percent rule,” Kunz says. “With this, you increase your weekly mileage by 10 percent or less. Many runners add more than 10 percent when increasing their weekly mileage, which often leads to injury, exhaustion and burnout. It's important to increase gradually so your body can adjust to the increased demand without stressing it to the breaking point."

Many runners don't strength train (think: bodyweight exercises like lunges, push-ups and planks) at all, which can lead to injury, says Jason Fitzgerald, head coach at Strength Running and author of 101 Simple Ways to be a Better Runner and Running for Health and Happiness .

“Strength training is anabolic, meaning it builds muscle, while running is catabolic, meaning it breaks down muscle, so it's necessary to maintain strength, prevent injuries, and improve efficiency and performance,” Fitzgerald says. “In fact, I don't even consider it cross-training. Strength work is just part of training.”

Yes, you should probably keep you shoes on while riding the subway. But wearing your sneakers 24/7 could actually be compromising your athletic abilities, says Kathleen Leninger, PT, DPT and running consultant at NY Custom PT & Performance.

“A lot of runners feel like they should live and sleep with their shoes on,” Leinger says. “It is important to strengthen the muscles of your feet, and the best way to do that is walking around your house barefoot. You can’t strengthen your feet if they aren’t exposed to the outside world!”

“Many of the lower leg and foot injuries that occur can be avoided with a simple strength and flexibility program,” Trautmann says. “Having strong ankles and calves are also the key aspect in force production and help produce a powerful toe-off.”

Just because the twinge in your knee is, ‘just a twinge’ doesn’t mean you should ignore it. According to Yusuf Jeffers, a USA Track and Field-certified run coach and trainer at New York City training facility Tone House, not paying attention to unusual pains early enough is another big issue common to runners.

“A pain that lasts longer than 24 hours is usually a sign that there's potential for injury,” Jeffers says. “Seek out trained professionals for their advice on therapies and strategies to help correct issues that might be contributing to the pain. Doing so before you're forced to stop running will keep you running longer and happier in the long run, pun intended.”

Just because your run is over doesn’t mean your workout should be over. Jeffers finds that many runners neglect stretching, which can negatively affect your future runs.

“Flexibility affects function,” Jeffers says.” Stretching before and after you run will keep tight muscles supple and functional and ready for the next run. Skipping the stretch will definitely lead to diminishing function over time.”

13. Sticking To One Surface

It turns out, the term, ‘pounding the pavement’ isn’t as happy-go-lucky as we thought. In general, Wilpers recommends varying the surfaces you run on.

“Pavement is usually the most easily accessible for runners, however, it is also much harder of a surface than say dirt or even rubber, like on a track,” Wilpers says. “The shock of your feet hitting the ground is a stress on the body, and with pavement the stress is greater than on softer surfaces. This stress can over-stress the body and cause an injury. While during the workweek, it can be difficult to get off the pavement, a great way to reduce mileage on the pavement is to find a fun dirt or gravel trail to run for your weekend long run.”