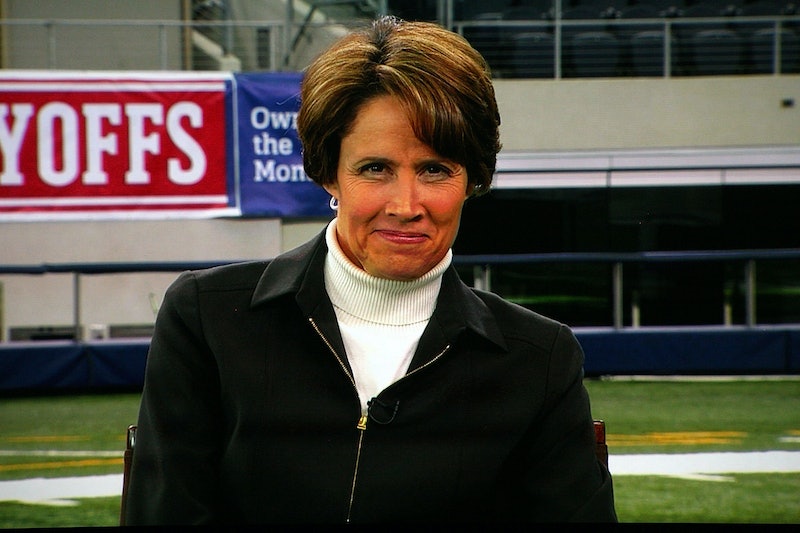 The Rio Olympics have had plenty of inspiring wins thus far, but not a lot of silly moments. Luckily, there's always the internet to relive past craziness until the next big moment happens. If you haven't seen Mary Carillo's 2004 Olympic Badminton rant, stop what you're doing right now. You have got to see this.

The professional tennis player and NBC sports commentator explained to Deadspin in 2014 that the clip, from a morning show, happened when she was told badminton would be "the curling of the Summer Games" and used some dead air time to put a personal touch on the event. She also mentioned other times that she's been loose with hosting events, comparing handballs to melons, ranting about horse passports, and paying tribute to a zamboni guy named Guido that you should definitely watch next.

The video begins as an equipment demonstration. That's all. Carillo shows her audience the difference between professional badminton equipment and what kids use in the backyard. She deadpans that household birdies have "tree seeking devices" in them, which is only foreshadowing the madness to come. Carillo then goes on to describe what sounds like a typical weekend event, or "game of badminton" at her house, which quickly devolves into "seventeen other sports" including water sports when the birdie gets caught in a tree and all of your sporting equipment (who knew you owned nineteen basketballs) plus the entire neighborhood gets involved in this affair.

Why is this so funny, even 12 years later? Watch it for yourself, first.

Have you recovered? Here's why, in this writer's humble opinion, this video is still so funny (maybe even more so) in 2016.

Let's start with the basics. Seriously, this thing plays like a stand-up routine. What's the deal with badminton?! I nominate Kristen Wiig to play her in a biopic.

There's something so delightful about a person on television talking about their every day life — whether it's Mary Carillo, Kelly Ripa, or Jennifer Lopez. I like to think that professional athletes and TV personalities have the same problems that my mom had when I was a little kid.

"You've got Colleen Clark up there trying to get a Spongebob Squarepants beach ball down with a hockey stick." — Oh, OK, I don't actually know you Mary Carillo. This sounds kind of personal between you and your neighborhood. Wait, who is Christopher Burr? That rascal...

Can You Remember The Last Time You Played Outside?

No, I don't mean music festivals or boozy brunch on a patio. The best comedy runs on recognition, and part of the reason that this video is so affecting and charming in 2016 is nostalgia. We're not only relating to it, but remembering and thinking about a part of our childhood that we haven't in a long time.

Enough said. We'll never know what this is, and we don't need do. Here's to you, Mary Carillo! Don't tell Johnny Weir and Tara Lapinski, but I think I've just found my new favorite Olympic commentator.