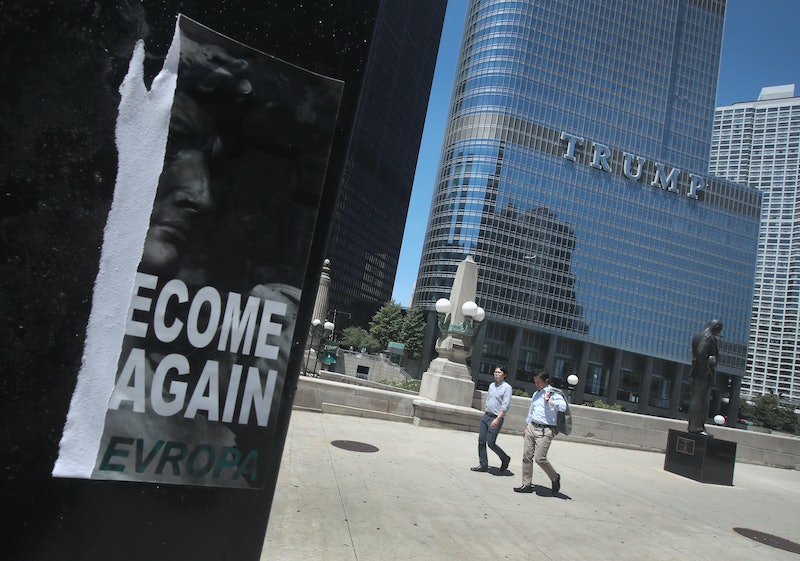 On Wednesday afternoon in the heart of New York City, a man began scaling Trump Tower with giant suction cups from the building's fifth floor atrium. The building, 58 stories high, is home to the Trump Organization headquarters and Donald Trump's penthouse. As police officers and firefighters attempted to get the man off the building, as of 6 p.m. ET, he was still climbing. Who is the man scaling Trump Tower? A YouTube video might hold the answer.

On Tuesday, a video was posted to Youtube from an account with the handle "Leven Thumps" entitled, "Message to Mr. Trump (why I climbed your tower)." At the time of this writing his identity has been speculated on but not confirmed. The video features a young man with a hood pulled up and hair in his face, though his face is still visible. He looks off to the side of the camera, and delivers a request for a meeting with the Republican nominee.

"Thumps" claims to be an "independent researcher" in the video; after apologizing to Trump for his appearance, he explains that he wants a "private audience" with Trump "to discuss an important matter," insisting that it's in Trump's interest to respond. He said that he's climbing the tower to get Trump's attention so they can arrange the meeting. His video ends with a call to viewers to vote for Trump in November.

Concern for the man's safety was palpable as the crowd that assembled on the street below gasped and rescuers deployed airbags below the climber, ABC News reported. Officers and firefighters began cutting holes in the building's windows in an effort to stop the climber so they could have a chance to talk him down. Shortly after 6:30 p.m. ET, police officers were able to grab the man and pull him inside the building.

Some on Twitter speculated early on in the man's climb that it was a protest, but it turned out the Trump Tower climber is a big fan of Trump — apparently, a bit too big.