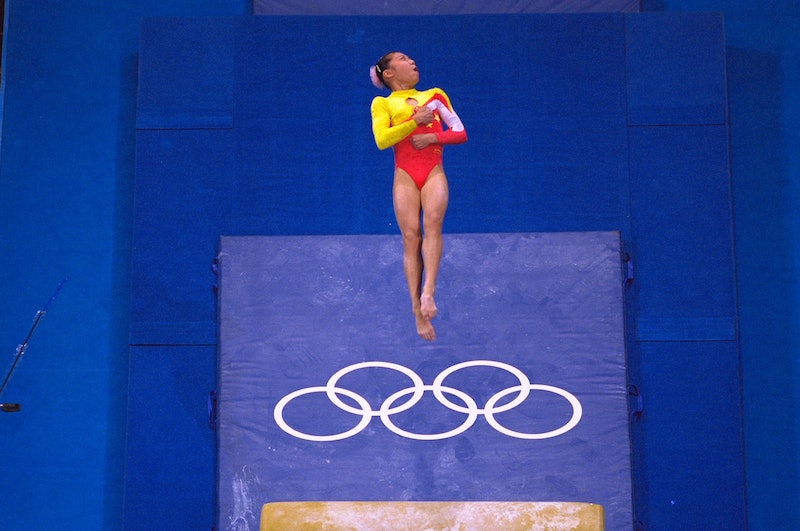 Since the 2016 Olympics began in Rio just days ago, the ages of members of the Chinese women's gymnastics team have been under suspicion, with Team China being accused of fielding athletes younger than 16 years old. According to the Games' rules, athletes younger than that aren't allowed to participate in the Olympics as gymnasts. Though the official Olympics website confirms that all of Team China's members are 16 years of age or older this year, this type of controversy has arisen more than once in the past two decades.

One such instance occurred in 2010, as The New York Times reported. After an investigation and a recommendation from the International Gymnastics Federation, the Chinese women's gymnastics team from the 2000 Summer Olympics in Sydney was stripped of its bronze medal after one of its team members was discovered to have been underage at the time.

The federation was initially asked to investigate age falsification at the 2008 Olympics in Beijing, but did not find any evidence that members of Team China had lied about their ages, according to the Times.

The federation did determine, however, that Dong Fangxiao — one of the Chinese gymnasts who participated in the 2000 Olympics — was only 14 when she competed and thus had not met the age requirement. They started investigating her age when she applied to work as an official during the 2008 Games in Beijing, and the age she provided on her paperwork indicated that she had falsified her age as a competitor eight years previously.

Upon the conclusion of the federation's investigation in February 2010, Dong's results were revoked from both individual competitions and Team China's third-place finish. IOC spokesman Mark Adams subsequently told the Times that the IOC's executive board would study the federation's recommendation to strip China of its medal. In April, the IOC accepted the recommendation and instead awarded the bronze medal to the United States women's gymnastics team, which originally finished in fourth place in the team event.

Team China took the bronze this year, too, but not without once again facing suspicions of age falsification. Although the members of the Chinese women's gymnastics team are younger on average than the members of Team U.S.A. or Team Russia, the official list of competitors confirms that they all meet the age requirement. Shang Chunsong is the oldest team member at 20 years old, Mao Yi and Tan Jixian are both 19, and Fan Yilin and Wang Yan are 16.

So while age falsifications have certainly been a cause of controversy during many of the past Olympic Games, it appears that women's gymnastics teams are sticking to the rules this year.