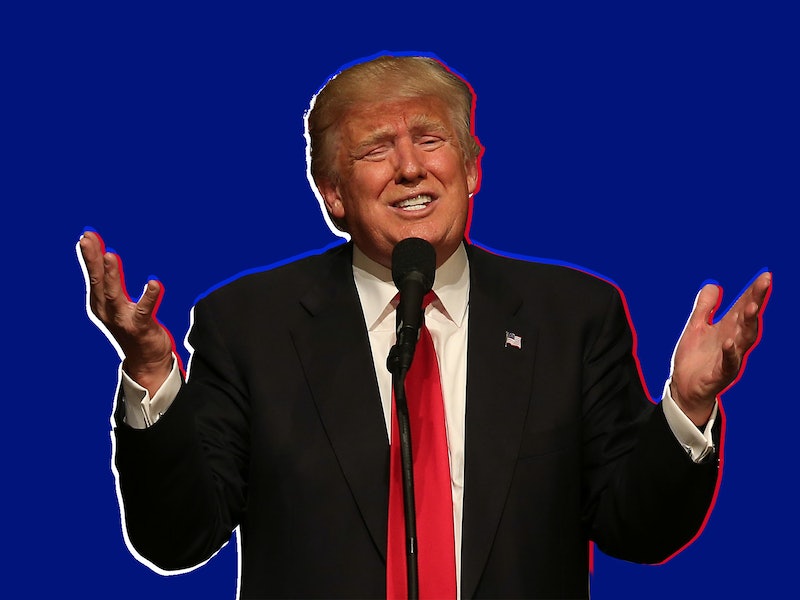 As if protecting people didn't keep the United States Secret Service busy enough, now they're having to do double duty. They're not just tasked with protecting the Republican presidential candidate from danger, but also have to keep track of Donald Trump's dangerous behavior, too. On Tuesday, Trump suggested Second Amendment supporters could assassinate Hillary Clinton, saying, "If she gets to pick her judges, nothing you can do, folks. Although the Second Amendment people, maybe there is. I don't know..." The irresponsible-at-best, wildly-and-recklessly-dangerous-at-worst comment gave the Secret Service pause.

While Trump and other Republicans brushed off the comments, saying that what he said didn't mean what it meant, the Secret Service diligently responded, face in palm, with a tweet, stating, "The Secret Service is aware of the comments made earlier this afternoon." It'd be reasonable if that awareness turned into action. According to 18 U.S. Code § 879, anyone who threatens to kill a former president, a member of their immediate family, or a major candidate for president could face a fine or even imprisonment. Threatening Clinton checks two of those three boxes.

Considering the unfounded garbage Trump's been able to peddle throughout his campaign, (like how he's somehow managed to insult two of the least controversial demos: babies and veterans) the fact that he said something so outrageous — yet again! — is turning out to be par for the course. Multiple outlets reported that the Secret Service had to talk to Trump. In fact, one Secret Service official said, "There has been more than one conversation" with the Republican nominee's campaign. According to Reuters:

This would not be the first instance of the Secret Service having to look into some controversial statements resonating from the Trump camp regarding a suggested Clinton assassination. As recently as last month, the agency has been investigating comments by New Hampshire State Senator Al Baldasaro, one of Trump's advisers on veteran's affairs, who made a call to arms, saying, “Hillary Clinton should be put in the firing line and shot for treason,” in reference to her private email server.

It raises a question for the future of the Secret Service: If Trump claims Clinton is too "unstable" to be president, what are we supposed to make of this scrutiny?