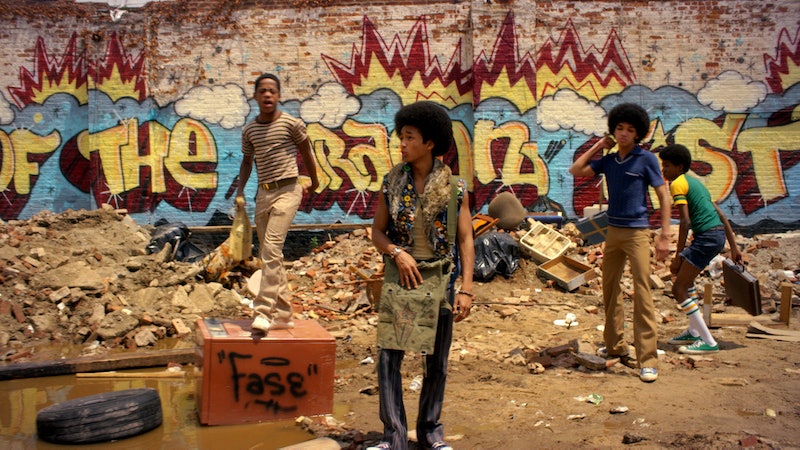 Netflix's The Get Down premieres on Friday and will take viewers on a journey back in time to 1970s New York City, specifically The Bronx. I grew up in NYC while Rudy Giuliani was mayor and the city had a safe and glamorous reputation, but my parents always reminded me that while they were coming of age in the city, the boroughs looked a lot different. Real photos of NYC and The Bronx in the '70s show just how right they were, as they depict a city on the verge of greatness, but going through some tough times.

The Get Down will follow a group of characters getting involved in the beginnings of hip hop as the disco era ends in The Bronx in 1977, featuring a different New York City than you've seen in TV shows like Friends, Gossip Girl, and Law & Order. In real life, New York City in 1977 was plagued by looting and arson during a summer blackout, the Son of Sam serial killer was at large, the city was virtually bankrupt, and the New York Yankees beat the Los Angeles Dodgers in the World Series, according to the New York Times. A pamphlet even dubbed NYC as "Fear City" in 1975, instructing visitors to "stay away from New York City if you possibly can," The Guardian reported.

The Bronx, though, was especially hit hard during the decade. According to the New York Post, seven census areas in The Bronx lost more than 97 percent of its buildings to fire and abandonment between 1970 and 1980, an occurrence that reportedly inspired sportscaster Howard Cosell's popular phrase "The Bronx is burning." FiveThirtyEight described the borough as having "blocks and blocks of rubble."

The New York Times also reported that the South Bronx — the area of the borough below Fordham Road — saw its population decrease by 40 percent between 1970 and 1980. It's a reputation that the Bronx is still trying to recover from, according to the New York Times, even in 2013. "We’re not trying to rewrite history,” Bronx Borough President Ruben Diaz told the newspaper. “We know where we came from. We lived it. What we’re saying is, ‘Give us credit, man.’”

See it for yourself in the photos below.

Subway Graffiti As A Statement

Before there were political tweets and Facebook posts, there was subway graffiti.

What a sight. Buildings reduced to mere rubble.

The Bronx On Fire

There is a lot of photo and video evidence of the fires in the Bronx, including the BBC's documentary The Bronx is Burning .

It looks like these two people had visited one of the vacant buildings in the borough.

Graffiti On The 6 Train

And lots of it. Subway trains may not don't look like that anymore, but The Get Down will show viewers just how beautiful graffiti like this could be, and how it was the perfect way to make a statement in the Bronx in the '70s.