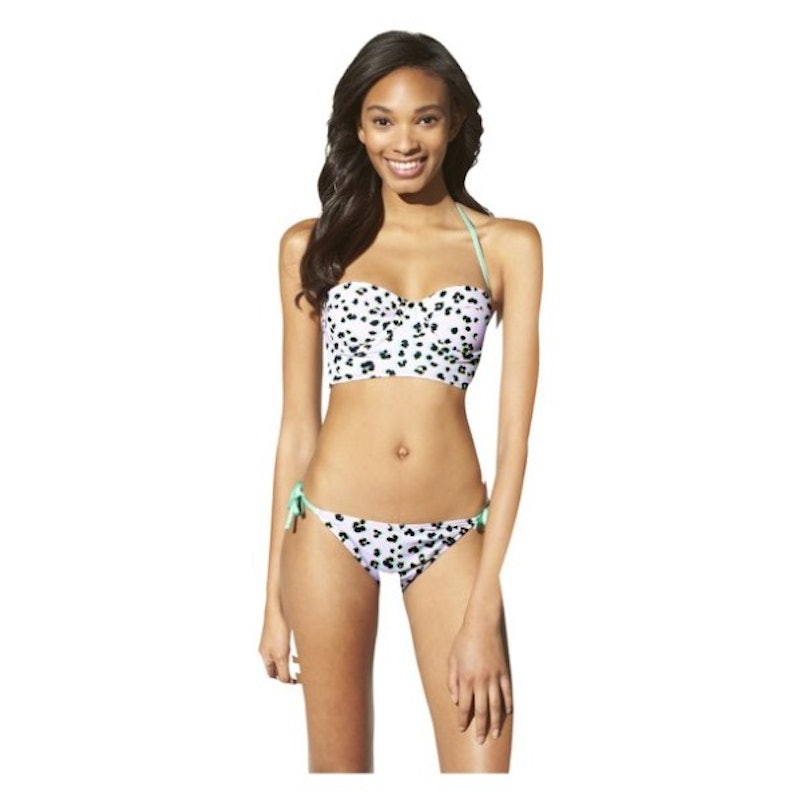 Another day, another Photoshop fail. This time, the culprit is mega-retailer Target, who let a totally laughable Photoshop hack job go live on its website. Someone should be getting fired for this one. Yes, it's that bad.

In a desperate attempt to make a skinny junior model look even skinnier (par for the course on any Photoshop job, really), the photo editor butchered an image of an attractive teen modeling an Xhilaration "midkini." The midkini is basically a longline bra with a pair of teensy bikini bottoms in a not-too-hideous leopard print. But we doubt anyone will be paying much attention to what this model is advertising because she has been transformed into a a strange, spider-limbed creature from the underworld.

Her shoulders are so bony that they look like they would cause her physical pain, her ribcage so narrow that it would definitely not support the rest of her. She does not look as though she were ever human, given the fact that her skin has been Photoshopped to oblivion as well and she exudes a shininess normally reserved for plastic Barbie dolls and animated Pixar characters. The editing job here so sloppy that her body no longer features smooth edges but sharp points that jut out from her skin in what The Gloss describes as "bone spurs."

If the model's impossibly trimmed waist and Gumby-length limbs were not enough, a substantial chunk of crotch has also gone missing. We imagine that the reason for this is that the photo editor was so overcome with glee at the thought of crafting a crater-sized thigh gap that they forgot how human anatomy works. Here's a close-up:

This is a huge disappointment, to say the least. In what realm of the universe is "a Lovecraftian horror assembled together out of ill-fitting puzzle pieces" more attractive than a real woman? Every single woman in the world, this model included, is more beautiful than this alien creature Target has created in the interest of perpetuating media's fascination with the thigh gap. A fascination, we might add, that is extremely dangerous and harmful to the mental and physical health of many women. Get it together, Target!