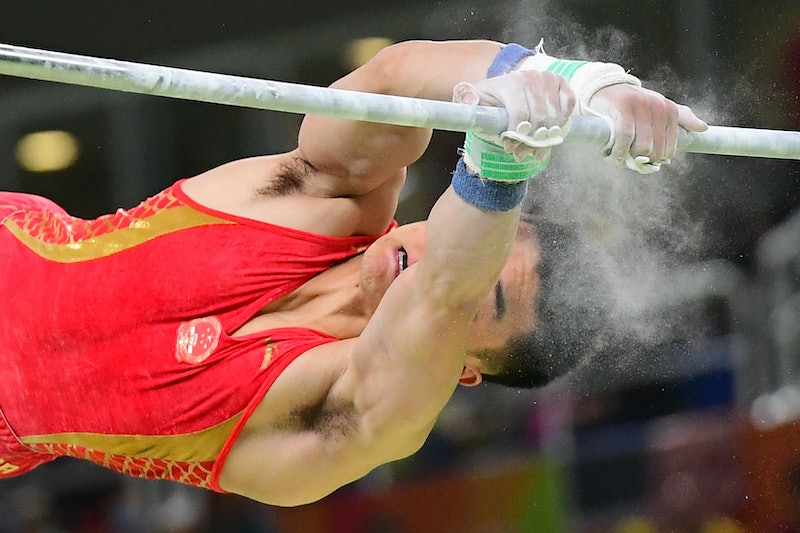 If you've been tuning into Olympic gymnastics this year, you've probably noticed one unusual thing about the events — that it appears as though the men and women athletes are practically performing two entirely different sports. Male and female gymnasts compete on different apparatuses, essentially dividing the sport based on their gender. The balance beam, for instance, is considered one of the most difficult apparatuses in gymnastics, requiring an obscene amount of strength, flexibility, and balance, but only women athletes use it. So why is it that men gymnasts don't perform on the balance beam?

Basically, the decision to keep men off of the balance beam most likely borrows from centuries-old gender norms. As Dvora Myers from Jezebel pointed out, the balance beam requires a particular amount of grace and flexibility — traits that are designated to the women of gymnastics, whereas the men's sport keeps a more specific focus on displays of strength. The men's rings, for example, require the gymnasts to hold their poses in a sheer presentation of brute physicality.

On the other hand, women's gymnastics more frequently pulls from the world of dance, requiring their athletes to move rhythmically to music. Many of the original pioneers in women's gymnastics began their careers as ballet dancers before moving on to the beam.

Keeping off the beam also likely has something to do with the way men and women are generally built, as well as the differences in athletes' bodies when gymnastic rules were being written. Myers noted that in the 1940s and 50s, older women preformed gymnastics, as compared to the teenagers of today's sport. Because women generally carry their weight in their lower bodies, an apparatus like the balance beam would have been better suited for them. Men, on the other hand, (generally) have greater upper body strength, so events like the rings and high bar were more aligned with what officials believed their bodies could do.

Currently, there wouldn't be much of a reason for a male gymnast to train on the balance beam (unless, of course, he felt like breaking some outdated gender norms). Each apparatus takes years of training and dedication, and for a man to devote himself to an event not listed under Men's Artistic Gymnastics would only take away from his training in areas that do fall under his division.

Though we might someday see a greater crossover between men and women in gymnastics, it looks like men will be staying off the beam for now.

More like this
The David Beckham Qatar Controversy, Explained
By Sophie McEvoy
Raheem Sterling Had To Choose Between His Family & The World Cup
By Bustle UK
Jamal Musiala Has The Cutest Nickname Based On A Disney Character
By Catharina Cheung
Romeo Beckham Shared A Sweet Farewell Note From “Proud” Sister Harper
By Sam Ramsden
Get Even More From Bustle — Sign Up For The Newsletter