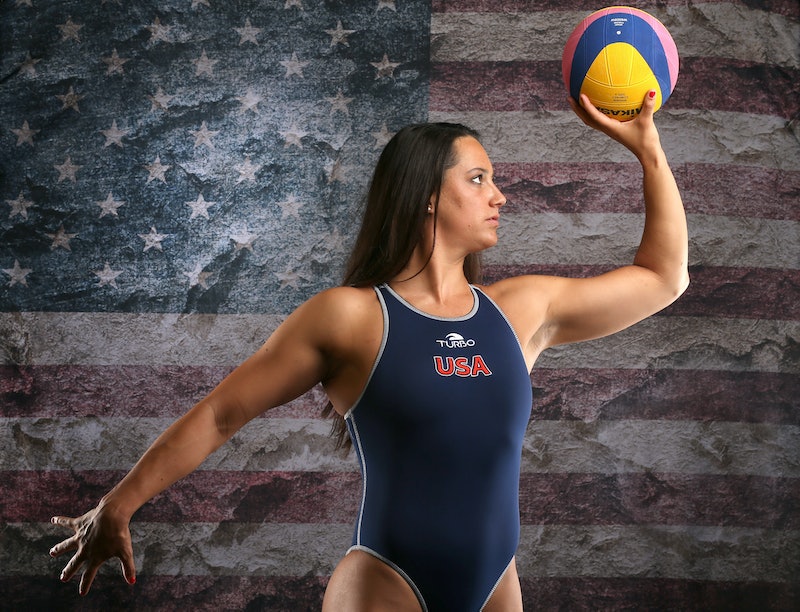 Today, on the day that we represent Team USA in water polo and play China, our team is officially a part of .000001 percent of the world. This might seem like a small number, but to us, it represents much more than that. It represents a dream come true. It's a number that unites the entire world through the love of sport and competition. Today, because we are a part of that number, we call ourselves Olympians. Today, we join an elite group of athletes who will represent .000001 percent of the world at the 2016 Olympic Games. Today, our lives have changed forever. However, one thing that remains the same is that the title does not define us. We are defined by the opportunity that the title presents us with

I feel lucky to officially call myself a two-time Olympian (2012 and 2016), and a hopeful two-time gold medalist. But even better than that, I get to call myself a teammate. I get to call myself a “We." We are 13 determined, inspiring, and talented young women who are striving for one common goal. We are a team. It sounds simple enough, but a team is not built easily. We are a culmination of different backgrounds, schools, families, and personalities. Each of us has a story, but what makes these stories special is the opportunity we have to create a new one together.

We were selected to join full-time training in January of 2015. Full-time is an accurate assessment — we train about six hours a day, six days per week, in the gym and in the pool. That doesn't include countless hours of travel, recovery, etc.

This means sacrifice in every sense of the word.

Over time, through rigorous training and testing, a group that started as over 20 eventually became 17 women. And then 17 became 13. Although only 13 can officially compete in Rio, all of these women will be there with us, and all of these women deserve this title. We always will be a part of something bigger than ourselves, pushing beyond breaking points every day to make our Olympic dream a reality. A roster does not define this team; it is defined by the sacrifice, respect, and selflessness of everyone involved.

Water polo is the oldest team sport in the Olympics, dating back to the 1900 Games. Back then, there was only a men’s division.

I was lucky enough to be coached and mentored by the legendary Maureen O’Toole, an Olympic silver medalist, world champion, and pioneer of our sport. I've played alongside Brenda Villa, a four-time Olympic Medalist (2012 Gold) and role model to many. They are just two of many who fought tirelessly to get women’s water polo in the Olympic Games. In 2000, this dream came true, and these women paved the way for the rest of us.

This is what I mean by being a part of something bigger.

Being an Olympian is an opportunity to represent those who came before us. I am especially privileged to represent my teammates from the special 2012 Gold Medal squad, which included my oldest sister, Jessica Steffens. We take great pride and appreciation in meeting and striving to exceed the legacy that those women created. Our team represents the gold standard; we always uphold our style of play while carrying the letters "USA" with us wherever we go. We bring our best day in and day out. Those three letters have been worn on many heads, and being an Olympian has given us the opportunity to honor the past and present of USA water polo, as well as inspire its future.

This title goes beyond just those who wear the caps. There is a team behind the team: the early morning carpools with Mom and Dad, the roaring crowds who never cease to show up, the teachers who understood a missed Friday test, the coaches who pushed us, and the siblings and friends who supported us no matter what. These teammates have made the difference for us.

Being an Olympian is our opportunity to give back to them, to thank them for keeping us going through good days and bad, and to thank them for always keeping sight of our dream, even when we felt ourselves losing it. It is an opportunity for myself to show my gratitude to everyone and everything my hometown of Danville, California gave me. But more importantly, it allows me to represent my family and my last name. My dad always told us to “remember our last name” when we walked out our door — now I have the opportunity to “remember my last name” through the biggest door imaginable.

My Olympic dreams started when I was a kid, and I hope they never fade. I think that the feeling that comes with being an Olympian — that wanting something so bad that you can feel it in your every action — it is the greatest feeling that life has to offer. I still feel the desire I felt when I was five, and I hope myself and my team can instill this same desire and hope in our country.