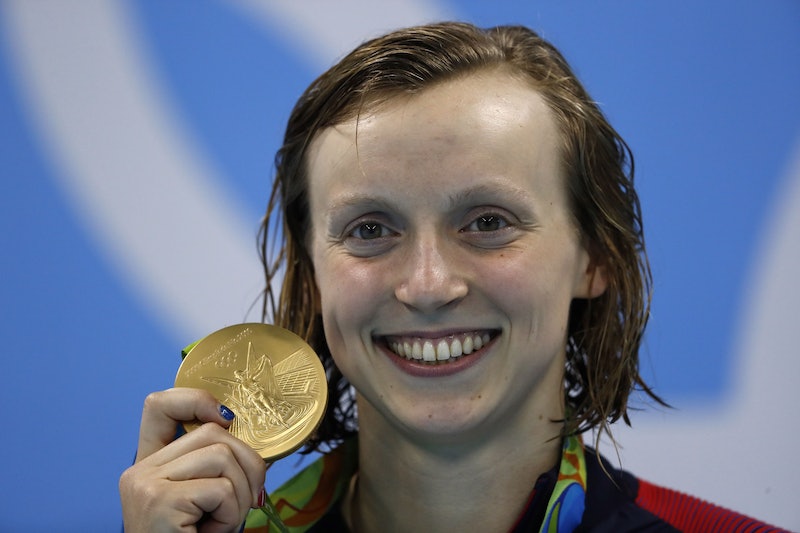 Throughout the Rio Olympics, Katie Ledecky has constantly proven to the world how trailblazing a swimmer and this one photo of Ledecky shows just that. She's earned enough gold medals (four in just one week) and smashed enough records (13 total so far) that we're thoroughly aware that she is extremely fast. Still, it's sometimes more difficult to gauge just how impressive something is without a direct comparison. Well, we now have the visual we need to clearly understand that Ledecky is in a league all of her own.

During the 800-meter freestyle preliminary race on August 11, Ledecky once again broke a swimming record. And she won the race by a lot. By that I mean she got to the end of the pool roughly seven seconds before any of the other swimmers. That's a gap that's two seconds larger than she won by earlier this week in the 400-meter freestyle.

At this point, Ledecky makes an intense swimming competition look like a leisurely dip in the pool, and it's so exciting to watch a woman make this many waves at the Olympics. The other swimmers are no longer her real competition; it's the clock. And this picture of her swimming alone in the lead so excellently illustrates that point.

The joke in that Tweet, of course, is that the other swimmers are not nearly as fast as Ledecky. She's swimming a race and her competition is seemingly nowhere to be found. She passes them by such a large distance that it's insane to think of anyone else having a real chance. And to think, she's doing this in a preliminary race. What incredible feat will she pull off in the final?

Luckily we have only one day to wait to find out. During the 800-meter freestyle final on Friday, Ledecky will attempt to not only beat her 2012 London record, but also become the second swimmer to consecutively win gold in the 200-, 400-, and 800-meter races, after Debbie Meyer did so in 1968. She's beat her own record in the 800-meter four times in three years. So the question for Friday's race is not so much will she win, but how fast will she do it?

It's been so fun to watch Ledecky conquer the pool so frequently and with such grace, and her swimming has garnered a lot of attention for the not as glamorous competition. She's also inspiring kids as a trailblazing woman. Everyone should be rooting for her to set another world record on Friday.