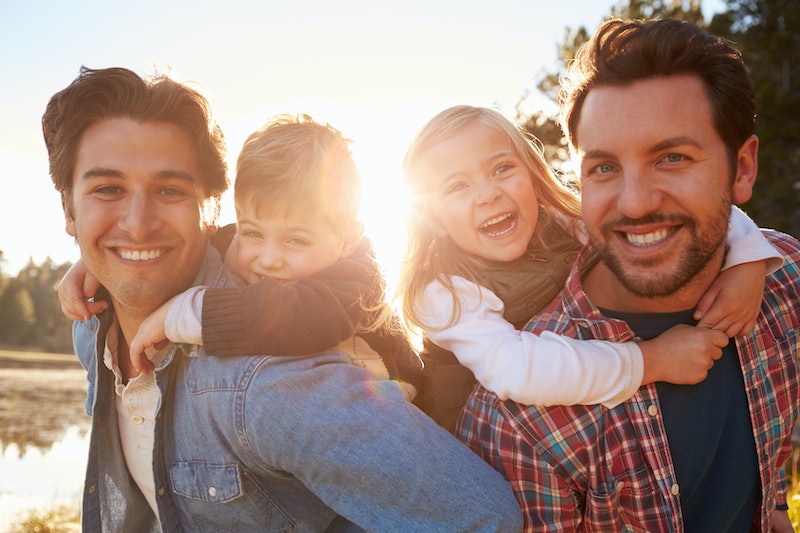 There's a National Siblings Day, a Grandparents Day, and even a National Pet Day in the pantheon of family-celebrating holidays that are not the standard Mother's and Father's Days. So it's no surprise that there was a campaign to launch #GayUnclesDay on August 14 on the internet. The mythology of the Gay Uncle (or Guncle) is well-known: a lovable member of many family units, often childless, lives in a cool metropolis, known for lavishing the children of their siblings with presents (often purchased in said cool metropolis), and typically the blissfully progressive ally at any Thanksgiving table.

Frankly, the gay aunties should get some love in here, too — think more of the same, plus an understanding of how to teach kids to inspect their personal biases and judgments out of respect for intersecting, marginalized identities, and a relentless championing of sex- and body-positive feminism, which occasionally culminates in busting out a vulva puppet to teach an impromptu lesson on the female reproductive system. (Ask me how well I handled my 3-year-old nephew lifting up my skirt recently because he thought I had forgotten to put underwear on. Needless to say, my brother and sister-in-law were horrified by my cheerful encouragement of his curiosity, coupled with an age-appropriate consent chat. Queer aunties, ftw.)

But I'm willing to let #GayUnclesDay get off the ground first before we usher in a better gender-neutral catch-all day celebrating all the queer elders in a young person's life. Here are some tweets from the first Gay Uncles Day:

Of course, there's been a smattering of "ugh"s in the queer community around the holiday. Obviously, it isn't remotely inclusive of queer identities, but also, some say it's tokenizing gay men as sexless, childless, free babysitters, in the same way straight women often tokenize their gay male best friends as personal stylists/besties/shopping buddies. There is a grain of truth in this. But also, the holiday isn't really for or about the relationship between a parent and their gay sibling.

It's about the relationship between kids and an older, non-heteronormative family member. It's about lending visibility to adult queer folks in families and giving kids a model to love, embrace, and look up to. In fact, the LGBTQ population largely credits knowing a queer person as one of the ways mainstream acceptance is fueled. Honoring the special relationship between a child and the person who is most likely the first queer adult they have a bond with is definitely deserving of its own holiday. Also, you can bet my first Queer Auntie's Day Brunch will be lit.