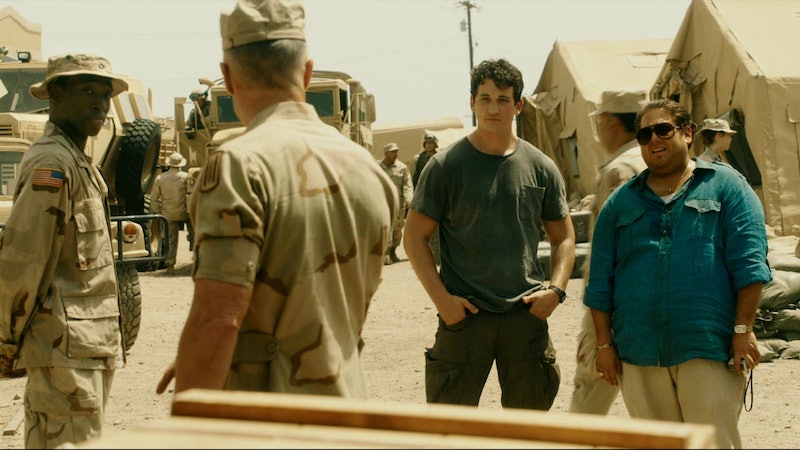 Jonah Hill and Miles Teller team up in War Dogs, a new dramedy from The Hangover director Todd Phillips. The film, in theaters Aug 19, features Hill and Teller as a pair of young stoners who end up becoming weapons suppliers for the U.S. Army in Afghanistan. It's a crazy premise, but it turns out that War Dogs is based on a true story. That shouldn't actually be too much of a surprise considering that the film references a recent period in U.S. history, and both of its leads have experience in films based on real life (Hill appeared in Moneyball and Wolf of Wall Street; Teller is currently working on Thank You For Your Service).

Yet the story behind War Dogs might be the most interesting of all. The two main characters, Efraim Diveroli and David Packouz, were twentysomethings in Miami who became major weapons contractors for the U.S. Department of Defense in the mid-2000s. War Dogs follows the lives of Diveroli and Packouz as the men find their way into the arms business, rise in the ranks through some creative business dealings, and live the high life among their quickly-amassed fortune. But what comes up must goes down, and the movie captures that part of the duo's journey, too. Here's a few other things you should know about the story behind War Dogs.

Diveroli and Packouz were teens when they met at an Orthodox synagogue in Miami Beach. Both were rebellious, but while Packouz had no clear aspirations for his future, Diveroli already knew that he wanted to be in the arms business.

They Came Into A Big-Time Contract

Diveroli founded an arms company called AEY Inc, and Packouz came onboard. They procured weapons from the "gray market," according to Rolling Stone, and then started bidding on online federal contracts for supplies. After building a reputation with smaller deals, AEY got a $300 million contract with the U.S. government for a massive amount of weapons and ammunition for military efforts in Afghanistan.

They Got Caught In Shady Business Dealings

In 2008, the army discovered that the AEY had delivered to them mass quantities of Chinese ammunition, violating the U.S. arms embargo against China. AEY had attempted to pass off the ammunition as being Hungarian, constituting fraud. The controversy prompted a review by the military of the policies surrounding business relations with third-party munitions suppliers.

There Were Major Consequences

The story is particularly shocking given the young ages of its participants and the enormity of their controversial business dealings. It may seem unbelievable, but War Dogs will walk you through the real-life story (albeit with some embellishments) and, given the cast and directorial team, there are likely to be some laughs along the way.