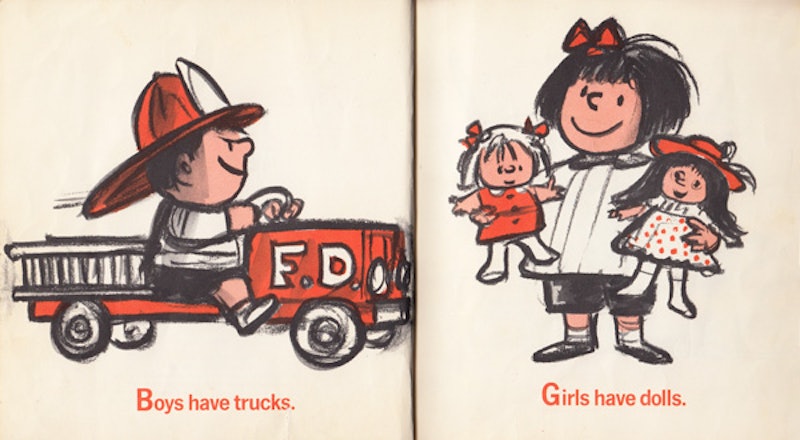 Here’s one from the vaults on this sunny Tuesday afternoon: In 1970, right at the height of the second wave of feminism, a picture book hit the shelves of bookstores across the country. Entitled I’m Glad I’m a Boy! I’m Glad I’m a Girl!, it had the audacity to illustrate a gender division no one felt comfortable with; in fact, it even earned itself the reputation of being the most sexist book ever printed, with illustrations that said things like "Boys fix things; Girls need things fixed."

44 years later, the illustrations are making the rounds again. Here’s the thing, though: According to Brain Pickings, everyone — even reviewers at the time the book was published — missed a crucial fact about its author, Whitney Darrow, Jr. Darrow wasn’t your average children’s book creator; he was a satirist whose cartoons graced the pages of The New Yorker for almost half a century. So maybe the book isn’t as sexist as it seems at first glance. Maybe it’s actually a brilliant piece of satire, with Darrow showcasing gender norms in a form that highlighted their absurdity in a way that no amount of well-reasoned prose could. A picture is worth a thousand words, after all.

Unfortunately Darrow never spoke about his intentions behind I’m Glad I’m a Boy! I’m Glad I’m a Girl!; he passed away in 1999 and the book has been out of print for years. But if it is indeed satire, there’s an interesting line to be drawn from it to the “picture books for grownups” that have gained so much traction recently. Reads like Are You My Boyfriend? and (of course) Go the F*** to Sleep don’t address the same sorts of issues social issues that Darrow’s creation does; they do, however, harness the same sense of humor. Something magical happens when you take real life problems and boil them down into children’s books. It enables us both to laugh at them, and to consider them even more seriously at the same time — whether it's an issue of love, gender politics, or simply trying to get your toddler to go to sleep.