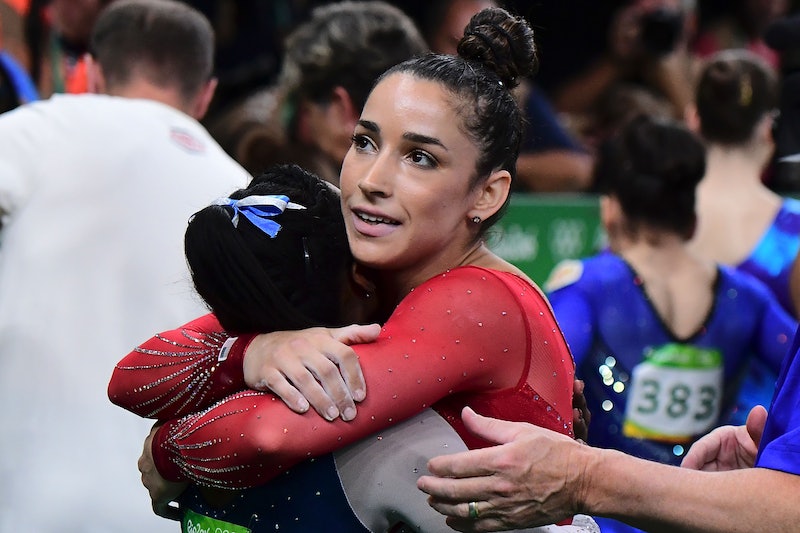 On Thursday, Simone Biles won the gold in the women's gymnastics all-around, and she wasn't the only American up there — Aly Raisman finished up just behind her, clinching the silver. Raisman's parents' reactions as they watched Aly compete made headlines earlier this week, but they reportedly burst into tears after their daughter took home the silver from the all-around competition, and gymnastics fans everywhere are demanding footage of their latest reactions.

During Raisman's bar routine, her parents — Lynn and Rick Raisman — made every anxious gymnastics fan out there feel validated; they kept squirming in their seats and moving back and forth, looking extremely nervous as Raisman performed. They weren't the only ones, either; President Obama told USA Today that watching gymnastics is "too tense," and that he's always worried someone's going to fall.

Raisman hasn't really seen her parents during the Olympics — except, of course, during the now-viral video of their amazing reactions to her performances. “More people are texting me about my parents than me,” Raisman told Yahoo. And she's just fine with that. During Thursday's all-around gymnastics competition, fans of the sport took to Twitter to demand footage of Raisman's parents. Their precious reactions are not just fun to watch, though; this is possibly their daughter's last Olympics, according to the Washington Post, so despite the fact that Raisman is an extremely consistent gymnast, their anxiety on their daughter's behalf makes sense. They were certainly nervous during the all-around final.

Just look how adorably stressed out they looked earlier this week:

If watching the Olympics were a sport of its own, Raisman's parents would take the gold. So it's pretty clear why fans want more:

Once it became clear that Raisman would be taking home the silver medal from the all-around, the 22-year-old gymnast had burst into tears — and so, reportedly, did her parents.

NBC's Andy Thornton was right, and fans' demands have been answered with some footage from primetime. Now we can all share in the emotional rollercoaster that Raisman's parents were experiencing:

The moments right before Biles and Raisman found out how they had done were nerve-wracking for everyone, and probably most of all for Raisman's parents. In the end, they weren't disappointed. Biles and Raisman have led their team to victory in a memorable moment that Team USA should be proud of.