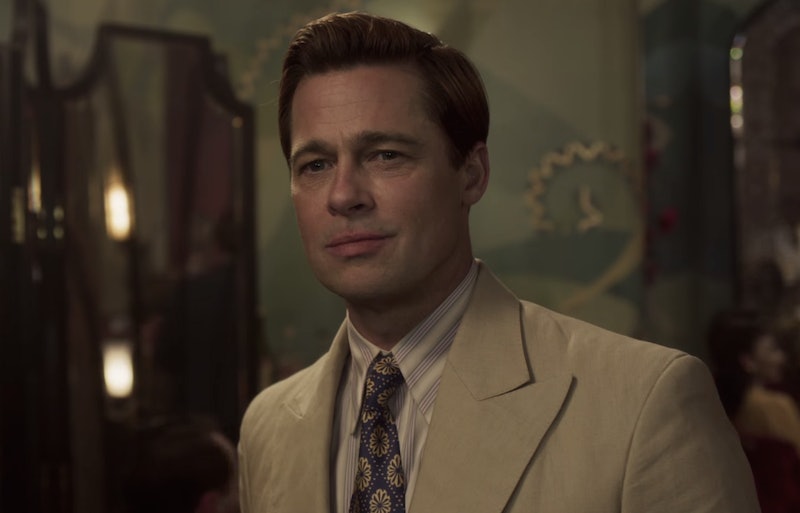 Raise your hand if you've seen a movie in which Brad Pitt plays a spy. So that's all of us, right? Pitt Allied movie trailer shows the actor playing a spy/assassin who ends up falling in love with another spy/assassin (Marion Cotillard), which, to be honest, sounds a wee bit familiar. There are a few parallels between this and Mr And Mrs. Smith, yes, but it's not just Mr & Mrs. Smith: long before he met, worked with, and fell for Angelina Jolie, he played alongside Robert Redford in Spy Game. Seriously, guys, is Brad Pitt actually an actor? Or is he just a spy playing an actor who likes to play spies in the ultimate double bluff? I guess we'll never know.

Still, let's work our way through our complicated Pitt-as-spy feels through the scientific usage of... a battle of Pitt's spy roles. Which role offered the most convincing depiction of spy life? Which film in-spy-red us? And since James Bond has taught us that spying is 90 percent seduction and maybe 10 percent political intrigue, which film offered intense levels of sexual tension worthy of the spy genre? You're up first, Allied. Enjoy that seriously sexy trailer, and get ready to get critical about the genre that Pitt does so, so well.

I cannot tell a lie: like the rest of the planet, I have not actually seen this movie because it isn't out yet. But if you think that's going to prevent me from writing an astute analysis of it drawn entirely from a two minute trailer, you're crazy. There are limited amounts of spying shown in the trailer and a fairly maximal amount of Pitt being distracted from his duties by Marion Cotillard's décolletage. So far, so fair: after all, isn't practically every James Bond movie also the same? Everyone knows seductive spies are the best kind. Given that he's able to seduce Cotillard in the space of the time allotted to the trailer, I'm giving Brad Pitt-as-Max Vatan a 4/5.

Great, fun, campy movie. Terrible spies. Yes, I know, I know, they're technically "assassins," but their assassin work seems to involve a lot of spying: pretending to be someone they're not, getting into close proximity to their target, looking through binoculars. But yes. If they're the best assassin/spies in the world, how would they not know what their partner did? There's literally no way. I know I'm being pedantic about this, but this level of blind spot? Nope. Sorry Brad Pitt-as-John Smith, you're getting a disappointing 2/5 for spying.

Pitt's character Tom Bishop may not seem like a great spy at the outset of the movie, which shows him captured by China when attempting to release a woman from the People's Liberation Army prison near Shanghai. But then Nathan Muir (Robert Redford) swings by the CIA headquarters to convince them that they need to fight for Bishop's release, not look for an excuse to allow the Chinese officials to execute him. Bishop hits that sweet spot between actual spy competence and human warmth: (spoiler) he gets caught thanks to an entanglement of the heart. And, as I've mentioned above, spies being into ladies is good. So, 5/5 for Tom Bishop.

Yes, we probably need to wait to actually watch Allied, but as things stand now, Tom Bishop is my favorite Pitt spy role. It's smart. It's emotional. It's almost certainly going to be the first of your Brad Pitt marathon-watching spy-ral. Enjoy.