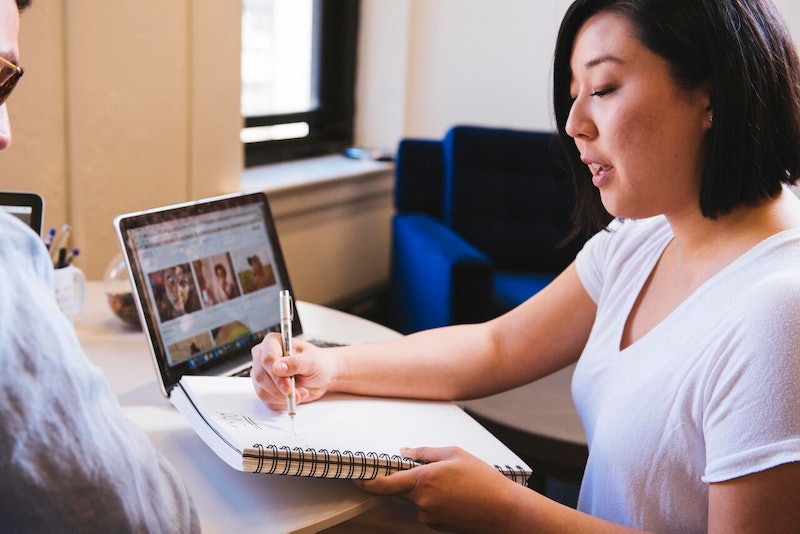 Interviewing for a job can feel daunting. You have to sell yourself to your potential employer and deal with feeling stressed at the same time. But how do you know if you have the job in the bag or not? There are ways to figure out if you didn't get the job if you're not quite sure. The reasons you didn't get it are sometimes out of your control, but other times the reasons are really clear — for example, if you came unprepared or showed up in the wrong attire.

"[You didn't get the job if you didn't] understand the company culture well enough. This is a huuuuuge mistake as it will make a candidate seem uninterested and uninformed, so it’s important to study up to see if you would be a good culture fit. Moreover, understanding a company’s culture is going to allow you to tailor your answers during the interview. [Also, if you wear a] sloppy dress and/or [an] inappropriate dress. For example, if you are interviewing at a startup, you should avoid wearing a fusty suit and using all the big words [you've] learned in college because startups are much more low-key. That being said, that same outfit and big talk could do wonders for you while applying for a job at J.P. Morgan. It all depends on the company culture, and understanding a company’s given culture will give you dramatically better chances at succeeding in an interview," says chief psychometrics officer at Good&Co Dr. Kerry Schofield in an interview with Bustle over email.

If you've recently interviewed for a position but you're not sure if you got the job or not, don't worry. You'll hear one way or the other eventually, and if you didn't feel 100 percent confident in your interview, then there may be some signs that can point you in one direction or another.

1. They Didn't Respond Back To Your Email

"Companies tends to do this a lot and it's not right, but it's out of your control," says career counselor Lynn Berger in an interview with Bustle over the phone. Companies who are interested in a candidate will respond to any email with enthusiasm, but if the candidate sent a thank you email and didn't hear anything back, then that's a clear sign the candidate didn't get the job.

2. They Reposted The Job On The Site

3. An Outside Recruiter Contacted You To Apply After You Just Interviewed

Even though you want to hear from a recruiter, you don't want to hear from one if you've just interviewed with the company and an outside recruiter calls you for the first time. "Sometimes companies hire outside contractors to recruit for the position. So if they contact you even after you've just interviewed for the same company, it could signal that the company didn't contact their recruiters to tell them that they've found their person," says Berger.

4. Your Had A Short Interview

It's never a good sign if you have a short interview or gives an excuse to cut the interview short. It shows that they already know you're not a great fit and don't want to waste anymore time. "If the interview is less than half an hour, that's not a good sign," says CEO of Skinfix and SweetSpot Labs Amy Gordinier-Regan in an interview with Bustle over email.

5. They Wish You Luck In Your Search

"If the interviewer thanks you for your interest and wishes you luck in your search. [That's] a [clear] hint that you're likely not going [any] further," says Gordinier-Regan. You don't want an interviewer to wish you good luck, you want them to be eager to hire you and ask you to come back for another interview.

6. They Do The Opposite Of What They Said They Were Going To Do

It's really unfortunate when a interviewer or recruiter doesn't do what they said they were going to do. But sometimes they say things just to be nice, even when they don't intend on calling you back. "Do not get too wound up about what the interviewer said at the end of the interview! Just because the interviewer [said] 'We want to make a decision quickly' or 'You’ll be hearing from us' or 'The recruiter will be reaching out to you with next steps' (or anything along those lines), that doesn't mean you are getting another interview scheduled. They just say that sometimes. It is less awkward for them to end interviews that way. It is not conclusive," says Schofield

8. You Haven't Heard Back A Week After The Interview

Wouldn't it be great to know if you got the job or not right after the interview? Well, until that becomes common practice, you have to wait days until you hear back from the recruiter. But if you don't hear anything a week after the interview, then it probably means you didn't get the job. "If you haven’t heard anything in a week, you can reach out – but not to everyone. If you made a special connection to someone and they gave their business card, you can reach out to that person. Otherwise, send a note to the recruiter along the lines of 'I had such a great time interviewing last week. Do you need anything from me?' One follow up email, one week later, nothing else," says Schofield.

9. You Showed Up Unprepared

Sometimes the biggest reason why you didn't get the job is because you didn't do your part. Even if you think you can wing it, don't. The way you prep for your interview will show your potential employer how you will prep for your potential future assignments and job. "Being ill-prepared. Being negative. Bringing up negative press about the company in an attempt to seem educated about the company. This is not your chance to try to have a 'gotcha' moment with them to prove your knowledge," says Schofield

Don't feel defeated if you didn't get the job. Yes, it sucks, but it's not the end of the world. There are plenty of other companies that will be happy to have you. Keep your chin up, continue to put your resume out there, and try to be positive. Sooner or later, you'll find your dream job, too.