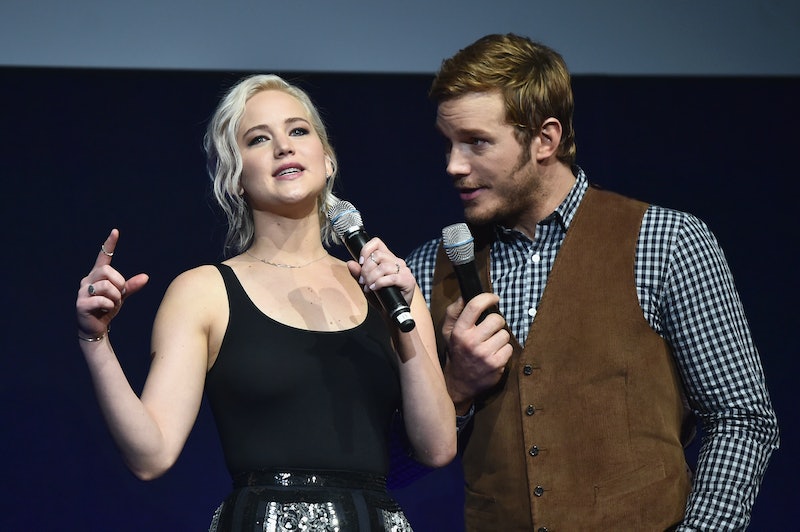 When you stop and think about it, it kind of hurts that it didn't happen sooner: Jennifer Lawrence and Chris Pratt. On our screens, not in real life (though I'm definitely not opposed to that happening, either). Lawrence and Pratt's movie Passengers is a thing I'm very much behind. The sci-fi movie, which drops December 21, follows the pair on a luxury spaceship headed to the Homestead II colony. Journey time? Oh, just 120 years. They're just two of the 5,000 passengers who are traveling in suspended animation when they're mistakenly woken up 90 years too early. Bummer tsunami, right? But it gets worse: while our adorable couple fall in love, they discover that something's not right. The ship isn't working as it should, and all of the ship's population's lives could be at risk. The story sounds fantastic, but this isn't the real draw for me. I think the movie could establish a legendary first: Pratt and Lawrence as the most likeable onscreen couple of our era, like a latter-day Cary Grant and Katharine Hepburn.

And I'm not alone in recognizing their charm. Director Morten Tyldum told Entertainment Weekly the following:

I honestly couldn’t ask for a better cast. They’re so great together, and both of them are so hard-working. They take the characters so seriously and bring so much to the roles with charm and intelligence and charisma. They really went for it and it is phenomenal to watch.

OK. Are you ready to see these two in character? Same.

I guess the thing that blows my mind about this pairing is how similar our reactions as audiences are to both stars. Don't get me wrong: both Chris Pratt and Jennifer Lawrence are easy on the eye and talented. But that isn't exactly what springs to mind when you think of either of them. Nope — they're both defined by their charm. And I'm not talking about a refined, Old-Hollywood, Clooney-esque charm that disarms you and overwhelms you, keeps you at a little distance from them. I'm talking about something that boils down to purely how likable and approachable they come across as.

Let's start with Lawrence. She was spotted by a talent scout while in New York at the tender age of 14 years old. She won an Academy Award for Best Actress for her role in Silver Linings Playbook at the tender age of 22. Last year, she earned over $52 million, making her the highest paid actress in the industry. Basically, Lawrence is not like you or anyone you know in every single way. She isn't the Hollywood equivalent of your cool, shruggy best friend. And yet doesn't it feel like she is? Isn't the charm of Lawrence that, despite all her success, she still seems like a bumbling, giggly, completely unpretentious human being who's positioned completely outside the Hollywood system? Which is insane, because it's hard to think of an actress who does better in Hollywood in terms of pay and the roles she's offered than Lawrence. In short: she overcomes any distance that might be created between herself and her audience by her accomplishments and wealth, hanks to her sheer charm.

It's striking how similarly audiences react to Pratt. Like Lawrence, his charm is so overpowering that it can be hard to notice much else about him. According to Parks and Recreation co-creator Michael Schur, Pratt's character Andy was only supposed to be on Parks and Recreation for a six episode arc as Rashida Jones' annoying boyfriend. Entertainment Weekly quotes Schur as saying ”Almost at the point of the audition we were like, ‘Oh, we have to re-conceive this, because this guy’s the funniest person we’ve ever seen. We’re not letting that guy go.'” Pratt ended up being on the show for its entire duration — no great surprise. Andy Dwyer was easily and obviously, despite his klutziness, the most likable character on the show.

I guess what I'm saying is, I can think of lots of on-screen couples that are every bit as good-looking or glamorous or cool as Lawrence and Pratt. But in terms of sheer charm? Nobody can touch this pair. So, while the story sounds excellent and the director boasts an Academy Award nomination (for The Imitation Game), what I'm most looking forward to is seeing the galaxy-inverting force of the combined charm of the most charming people currently working in the entertainment business.