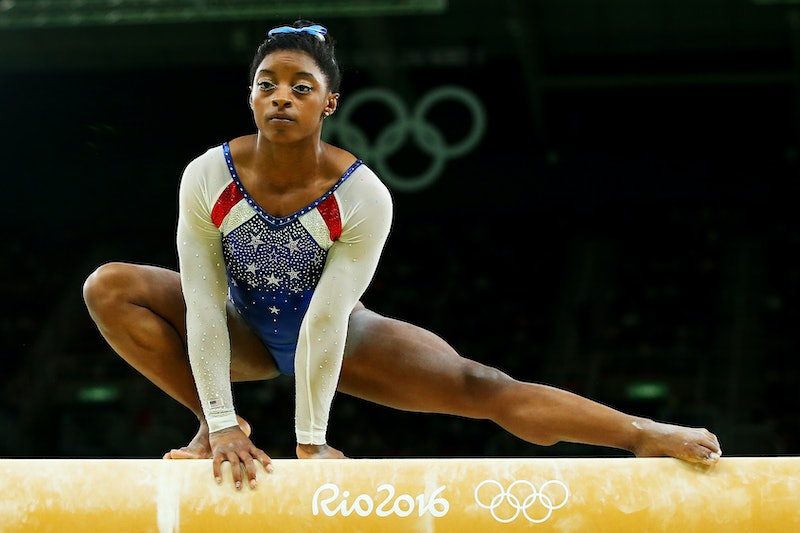 Simone Biles has been making history during her Olympic debut in Rio. The young gymnast has been dominating the competitions this past week, winning the individual all-around gold medal on Thursday, Aug. 11. Biles has been making a name for herself, solidifying her title as currently the best gymnast in the world. And the world is noticing. The New Yorker noted that it's Biles, not GOP nominee Donald Trump, who is "making America great again," which is why this is the publication's best cartoon.

What sets Biles apart from other gymnasts is the fact that she consistently nails multiple events, not just one. Biles dominates on beam, vault, and floor, and wins big by fearlessly incorporating some of the most complicated moves into her routines. In reality, Biles really is making America great again as a rising star of U.S. gymnastics. Nastia Liukin, the 2008 all-around gold medalist and a former Team USA gymnast, told the New York Times in a video interview, "At this point in time, nobody can beat Simone Biles," and suggested that Biles is basically competing against herself.

And when she won the gold medal on Thursday, Biles had some important words for the world. According to BuzzFeed News, she said, "I'm not the next Usain Bolt or Michael Phelps. I'm the first Simone Biles."

Biles is making America great again with her complex tumbling combinations, her signature "Biles" move in her floor routine, and her vault passes and difficult beam dismounts. And she's breaking records in the process. During Thursday's individual all-around competition, Biles won by 2.1 points, which is a huge margin. In fact, according to the Wall Street Journal, that 2.1-point margin is the "largest winning margin in a half-century." Not only that, her margin of victory in the individual all-around was greater than all of those from 1980 to 2012 — combined. That's huge.

According to USA Today, Team USA gymnastics coach Martha Karolyi said Biles is the greatest gymnast ever, noting, "I would put Simone now on top." Aimee Boorman, Biles' coach said, "A lot of people have said she won't be the greatest until she wins the Olympic all-around. So ... mic drop," USA Today reported.

I think it's safe to say America doesn't need Trump to be great — it already has Biles and she is on fire.