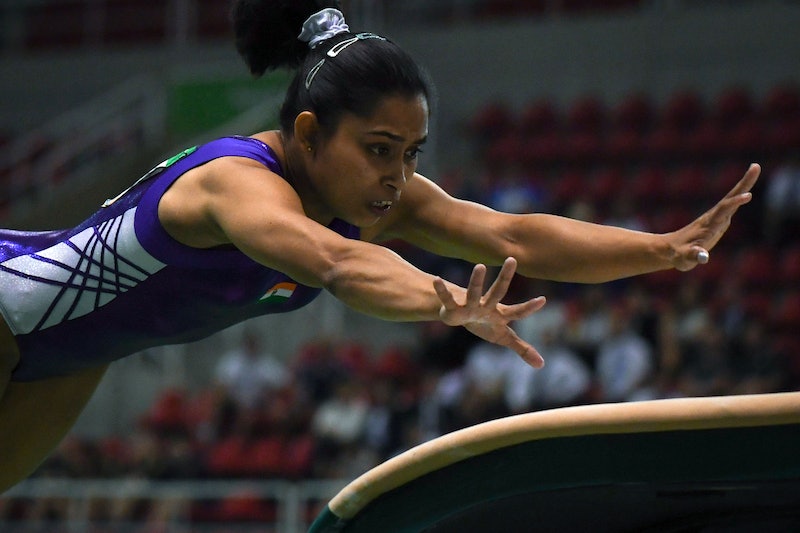 They call it the "vault of death." Even Simone Biles, largely thought to be the world's greatest female gymnast, won't risk trying it. Officially, the Produnova vault is the most difficult (and dangerous) move any gymnast can attempt on the apparatus. Unofficially, it's probably one of the craziest and scariest things you've ever seen in a gymnastics arena. While Biles, who's known for packing her routines with difficult moves, won't be attempting the Produnova vault at the 2016 Summer Olympics in Rio, two other gymnasts will. But what exactly is the Produnova vault and how did it get its reputation for danger?

In its most basic definition, the Produnova is a front handspring off the vault table followed by roughly two and a half somersaults. While that may sound simple enough, it's incredibly risky. Gymnasts who don't gain the height needed to pull off the somersaults risk serious injury. Landing the Produnova is no easy feat, and many gymnasts won't even attempt it.

When asked if she'd ever attempt the Produnova vault, Biles reportedly told The New Yorker, "I'm not trying to die." She's not the only Olympic medalist unwilling to risk serious bodily injury for a higher difficulty score. "The people from outside [gymnastics] don't know what can happen. We know what can happen," Mihai Brestyan, the coach of U.S. gymnast Aly Raisman, told the Wall Street Journal. She described the Produnova as "a vault that's too risky."

Russian gymnast Yelena Produnova was the first female gymnast to ever successfully land the difficult vault (which is how it got its name). She stuck the vault's landing for the first time in 1999.

Thanks to its difficulty, the Produnova vault can earn a gymnast a high score even if they fail to execute it flawlessly. But that may change, according to The Wall Street Journal. Gymnastics' international governing body will reportedly move to devalue the vault's scoring next year in an attempt to prevent gymnasts unable to cleanly execute the difficult and risky move from attempting it in competition.

More like this
The David Beckham Qatar Controversy, Explained
By Sophie McEvoy
Raheem Sterling Had To Choose Between His Family & The World Cup
By Bustle UK
Jamal Musiala Has The Cutest Nickname Based On A Disney Character
By Catharina Cheung
Romeo Beckham Shared A Sweet Farewell Note From “Proud” Sister Harper
By Sam Ramsden
Get Even More From Bustle — Sign Up For The Newsletter