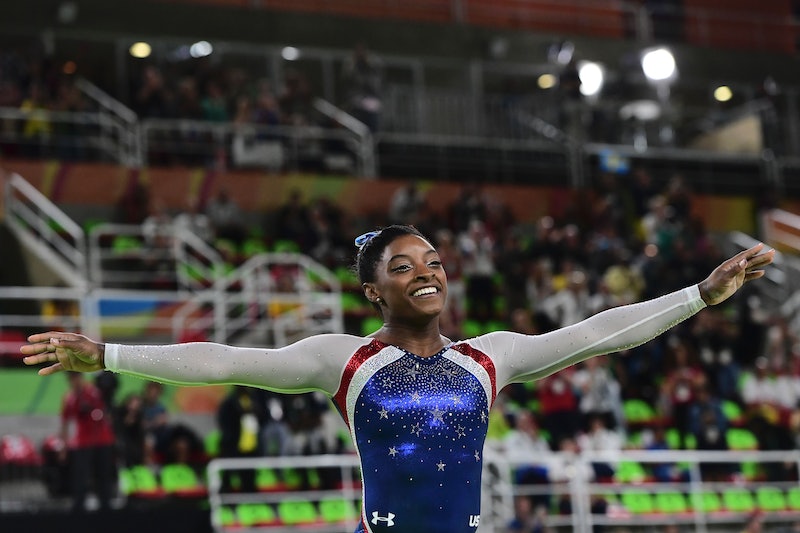 I’ve never paid so much attention to an Olympics as I have the 2016 Summer Games in Rio. For the last few weeks, my eyes have been glued to television programs and news articles about the athletes and their respective roads to Rio. What caught my attention most, though, were the athletes who look like me; the African-American women with brown skin and gravity-defying hair. Names like Simone Biles, Gabby Douglas, Simone Manuel, Allyson Felix, and Sloane Stephens have captured and held my attention.

It’s simple: The Rio Olympics has been all about Black Girl Magic.

I don't often get to see many women like me in mainstream media. From television shows to magazine covers, highlighting a woman of color — though it is slowly becoming more common — is still so rare that when it does happen it is praised as a big deal. But this year's Olympic Games are different. From swimming and Taekwondo to gymnastics and tennis, the number of dominating black women at this year's Games makes my head spin and my heart jump.

[Biles'] Black Girl Magic shattered the socialized picture of what a gymnast looks like. She showed me that I, a curly-haired black woman, could also be a gymnast.

Hailed as the Michael Jordan of gymnastics, the 19-year-old Biles won gold in the women's team all-around, individual all-around, women's vault, and women's floor, securing her status as the greatest gymnast of all time. A black woman is the best gymnast in the world. I had never given thought to attempting a balance beam routine, but I may just try it now. Biles showed me that I can. Her Black Girl Magic shattered the socialized picture of what a gymnast looks like. She showed me that I, a curly-haired black woman, could also be a gymnast.

No woman has ever won more than two consecutive world championships, until now. Biles has three. Not only is she the best, but Biles does not shy away from exuding confidence: "I'm not the next Usain Bolt or Michael Phelps," she told media following Thursday's victory in the individual all-around. "I'm the first Simone Biles."

The only thing more magical than watching Biles represent black women everywhere was seeing Douglas, 20, cheer for her teammate with a look of pride on her face from the stands. Douglas looked like a proud big sister as she clapped for the 19-year-old, and I was proud too. The moment prompted me to think back to Douglas' own groundbreaking Olympics visit at the 2012 Games in London. At her Olympic debut, the then-16-year-old Douglas became the first African-American woman to win gold in the individual all around and the first U.S. gymnast to take home gold medals in both the team and individual all-around competitions during a single Olympics.

The presence and success of these black women at the Games led me to look into the history of past black women Olympians. (That's another result of Black Girl Magic; it moves you to want to know more.) My search led me to Dominique Dawes: The first African-American woman to win an individual medal.

"She's definitely one of my inspirations and role models growing up," Douglas said of Dawes in a 2012 press conference. "I feel honored to be compared to her." Four years after that, Dawes herself would gush about Douglas and Biles, telling BET that the athletes will inspire the next generation of black girl gymnasts.

"It really does bring chills to me and tears from my eyes to know that I was able to inspire these young girls," she said. "That’s what Simon Biles is going to do for this next generation of gymnasts and that’s what Gabby Douglas did."

But gymnastics wasn't the only sport where Black Girl Magic reigned in Rio. Manuel, 20, took home a gold medal in the women's 100-meter freestyle, becoming the first African-American woman to win a gold medal in an individual swimming event at the Olympics. The importance of the groundbreaking feat was not lost on Manuel.

“I mean, the gold medal wasn’t just for me; it was for people that came before me and inspired me to stay in the sport," she told reporters after her victory. “For people who believe that they can’t do it, I hope I’m an inspiration to others to get out there and try swimming. You might be pretty good at it." Manuel and teammate Lia Neal are the first African-American swimmers to compete simultaneously on America's Olympic swim team.

Not only did they make history, but the pair chipped away at the stereotype that black people can't swim. The stereotype, rooted in the presence of Jim Crow and white supremacy, has plagued African-Americans for decades. And as I watched Manuel and Neal (who won a silver medal in the 4x100-meter freestyle) tear the harmful image down, I held my head high with pride — and even did a hair flip.

Felix dominated the women's 400-meter (in both the semifinals and round one) over the weekend. Water polo player Ashleigh Johnson helped the U.S. team secure a slew of victories over the weekend.

Some more history I've learned: Black Girl Magic in America first made its way to the Olympics in 1932 with hurdler Tidye Pickett and sprinter Louise Stokes. The pair took to the Games in Los Angeles as the first African-American women to make an American Olympic team. Their time at the Games, much like life for black Americans in the 20th century, was difficult.

Pickett and Stokes had to stay in an attic apartment in Los Angeles during the Olympics, segregated from other team members. They often even had to eat alone. I'm sure Pickett and Stokes would be proud see other black women dominating in Olympic events and enjoying genuine relationships with their fellow athletes, rather than eating alone in attics. And I'm sure they would be proud to know that their Black Girl Magic started it all.

Even after the hype from the Games has died down, even after the athletes have gone home with their medals in their hands, I can look forward to witnessing another victory: prosperity. The athletes are likely to receive endorsements, admiration, and time in the spotlight for months and even years to come — a far cry from the lives of black Olympians after past games.

The 18 black athletes in the 1936 Olympics in Berlin were denied recognition when they returned home to America. As the New York Times writes, "Some returned home to a bleak future; one was reduced to sweeping streets, using his Olympic jacket for warmth." Times have changed, and will continue to change. And all with the help of some Black Girl Magic.

More like this
Chelsea Woody On Shattering Stereotypes In Surfing
By Leah Groth
Rihanna & A$AP Rocky’s Astrological Compatibility Proves They'll Be Amazing Parents
By Nina Kahn
Here's Your Daily Horoscope For May 19, 2022
By Mecca Woods
The Sun Tarot Card Meaning, Explained
By Brittany Beringer
Get Even More From Bustle — Sign Up For The Newsletter