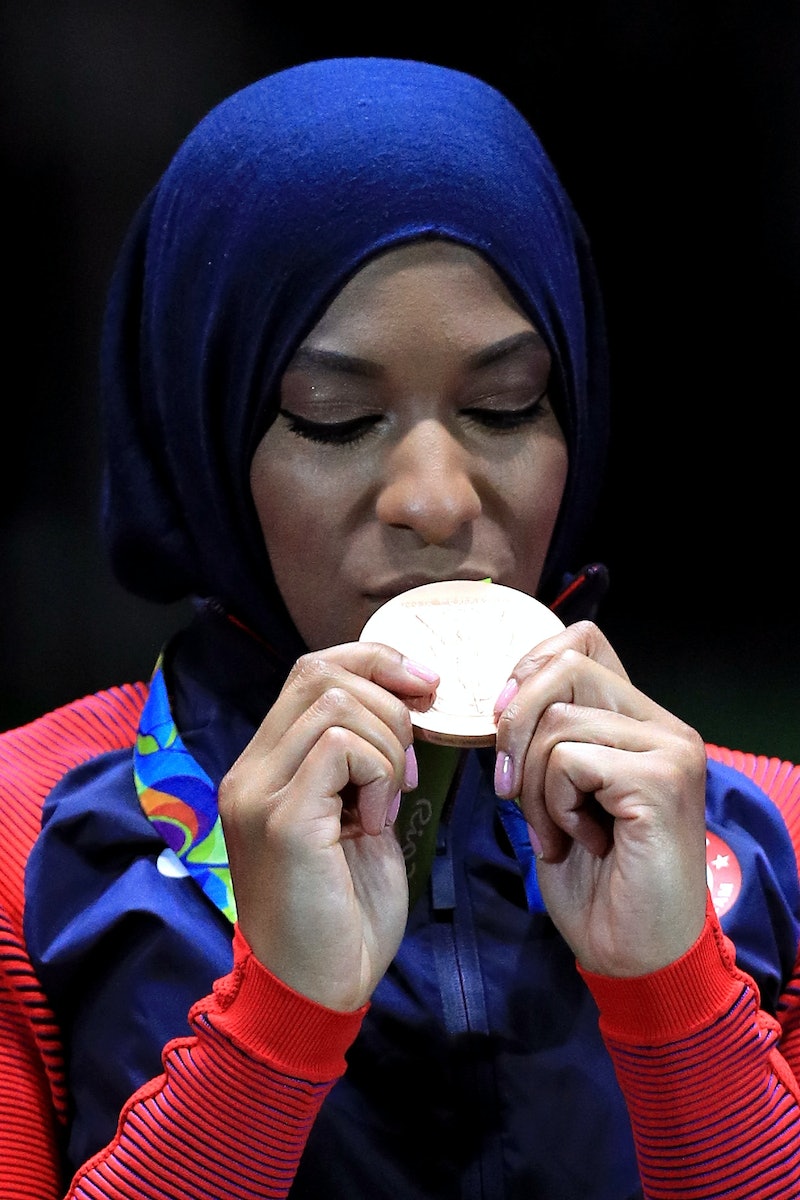 Don't look now, but the 2016 summer games in Rio have brought about yet another piece of Olympic history — Ibtihaj Muhammad and the U.S. women's fencing team have won the bronze medal in the team sabre event, finishing in third place (behind Russia and Ukraine) after dispatching Team Italy. And beyond just the fact that it's a big day for American fencing — the team also won the bronze in the team sabre event in 2012 — it's also noteworthy because of Muhammad's Muslim faith, and how she publicly expresses and adheres to it.

That's because, as ABC News noted following the U.S. team's win, Muhammad is the first American Muslim to ever win an Olympic medal while competing in a hijab. It's actually part of the reason the 30-year-old first gravitated towards fencing as her sport of choice — the head-covering mask that all fencers must wear allowed her to wear her hijab underneath.

And needless to say, she's excelled. She's currently one of the best fencers in the world, and even though she didn't nab any individual medals this time around, she'll exit Rio with a bronze around her neck — nonetheless a huge accomplishment, far beyond what most people will ever get to experience.

Muhammad hasn't been silent on matters of her faith, race, or heritage, either. Although the International Olympic Committee (IOC) is notoriously hostile towards the intersection of politics and the games, she recently addressed the presidential candidacy and decidedly hostile anti-Muslim rhetoric of Donald Trump, during an interview with CNN.

I think his words are very dangerous. When these type of comments are made, no one thinks about how they really affect people. I'm African-American, I don't have another home to go to. My family was born here, I was born here, I've grown up in Jersey, all my family's in Jersey, so where do we go? I'm hopeful that in my efforts to represent our country well as an athlete, that they change the rhetoric around how people think, and perceive the Muslim community.

While Muhammad's performance on the U.S. women's fencing team might not actually manage to temper the kind of divisive and ultimately dangerous rhetoric Trump seems to be serving up daily — reversing political headwinds of that sort is a very tall order — she's still accomplished so much this summer.

Both in claiming a medal, and in competing at the highest level, she's helped show young Muslim girls and women everywhere that there's a place for them on the Olympic stage, whether they wear the hijab or not. And that's a heartening message that ought to be remembered for a very long time.