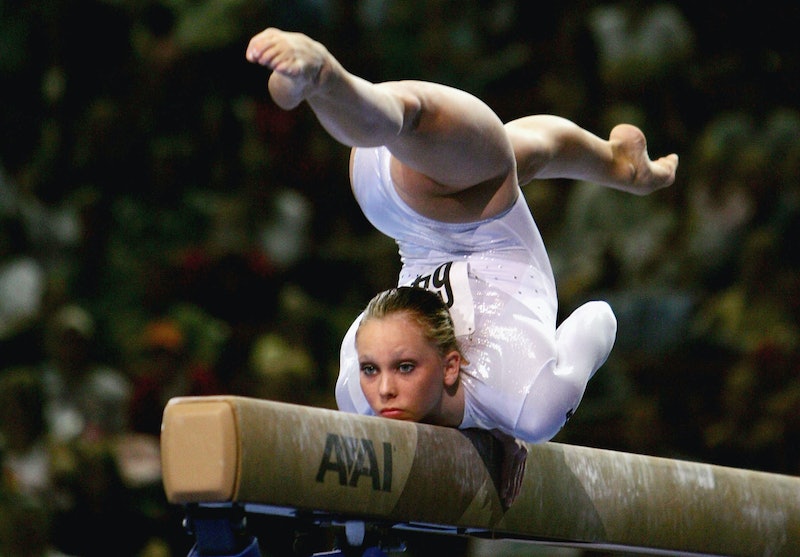 Team USA gymnast Alex Naddour won the bronze medal in pommel horse at the Rio Olympics on Sunday, capping off a pretty big year for the talented tumbler. Earlier in 2016, he and wife, Hollie Vise, a former world champion gymnast herself, became first-time parents to daughter Lilah. For those unfamiliar with who Vise is, though, you should know that she's hugely talented on the mat as well. She retired in 2004 due to a back injury, according to ESPN. But if you're looking for Vise and daughter Lilah in the stands during this year's Olympics, you won't find them — they are not in attendance in Rio de Janeiro due to concerns about the Zika virus, reported People.

"It's just one less thing for me to worry about," Naddour told People about his family staying home. The 25-year-old gymnast helped Team USA to a fifth-place finish during the team finals last week, as well as earning his bronze medal on the pommel horse. He told NBC Olympics that he credits Vise and their daughter for the extra motivation during this competition. "Maybe some other wives would get frustrated but she gets my training, she knows how bad I want it," Naddour told the Associated Press in July. "She takes care of Lilah in the morning so I can sleep and nighttime when I can sleep. Without her being in the sport and knowing what it takes, that would be difficult."

And Vise really does understand what it takes to be a champion gymnast. She won a gold medal in the uneven bars at the 2003 World Championships, tying with teammate Chellsie Memmel. Vise and Memmel also won gold as members of Team USA's world championship team that year — a team led by eventual 2004 Olympic gold medalist Carly Patterson. Vise was well on her way to going with the team to the Beijing Olympics, but she was diagnosed with a compressed disc in her back in 2004, according to ESPN. The injury caused a series of disappointments that led to her not being named to the 2004 USA Olympic team. "The whole world saw me when I realized that all my dreams went down the drain," Vise told ESPN.

But like any great competitor, Vise picked herself back up again. After taking a few years off, she returned to the sport, earning a full scholarship to compete for the University of Oklahoma Sooners, according to ESPN. She went on to be a three-time All-American, the 2010 NCAA Runner-Up on bars and floor and the 2010 Big 12 Conference Sportswoman of the Year, according to the university athletics website. The Sooner mats are where Vise and Naddour met and began dating — she was a senior and he was a freshman.

Since graduating, Vise received a masters degree from Oklahoma, moved to Arizona (which is where Naddour trains with his dad), and served as an assistant coach at Arizona State University, and she and Naddour got married in 2015, according to the University of Oklahoma athletic department. Last year, Vise told Inside Gymnastics that she is currently head optional coach at Arizona's USA Youth Fitness Center, the gym owned by Alex's dad and where her husband trains.

And when it comes to coaching her own clients, Vise told Inside Gymnastics that she enjoys helping future champs reach their goals. "My main goal as a coach is to help all of my athletes achieve what they want to achieve," she told the magazine. "I do not believe in pushing every athlete into the elite world but if a child has the talent and desire to go that route, I am more than happy to help them get there."

Even though Vise no longer competes, it sounds like she's been able to help many other gymnasts achieve their dreams — including her husband in Rio.