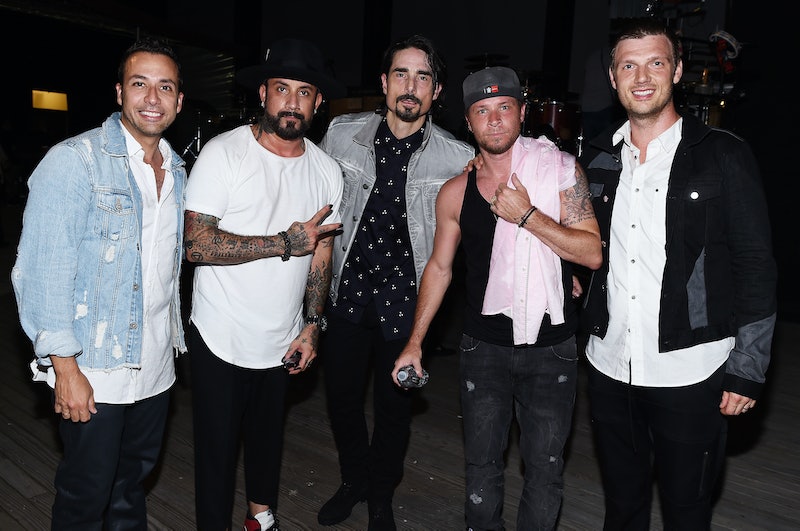 Backstreet's back in the studio. The classic '90s boy band is ready to produce their 13th studio album since they first formed in 1996, but this time around there are new additions heading into the recording studio with them. Nick Carter's son, Odin, joined the Backstreet Boys in the studio, and this could very well be the start of the band's very young (yet completely adorable) next generation. At least, I hope that's what it is.

This past week, the singer took to Instagram to share both the news of the band heading back into the recording studio and a picture of the latest addition to his family, his 4-month-old son, as they both got ready to mix some of the new tracks. The photo included the caption, "Hanging with daddy for the first time at the studio while we record a song for the new @backstreetboys album. #babies #newmusic #backstreetboys," as a follow-up to his previous career-update where he shared, "At @bigloudrecords with my boys listening to songs in Nashville for the next @backstreetboys record."

While new music is always welcome, the cuteness of Carter's son is what's really stealing the spotlight here. I mean, this is almost too much to handle.

After releasing their album, In A World Like This, in 2013, the boy band took a brief hiatus, where Carter had time to marry his wife and mother of his son, Lauren Kitt. Now, they're more than ready for their 2016 comeback. In fact, they also took time just a couple of months ago to tease a collaboration with Florida Georgia Line prior to fully revealing that they had a full new album on the way.

Baby Odin is already looking pretty comfortable behind the sound board. And, with Nick Carter for a father and Aaron Carter as his uncle, you just know that musical abilities are already running through his veins. Sadly, since that he can't quite speak yet, maybe a simple addition of a laugh or a cry on one of their tracks will have to do for now — Beyoncé did it with Blue Ivy on "Blue," after all. If not, I have my fingers crossed for some kind of dedication song. Especially since Carter is the last member of the five-person band to become a father.