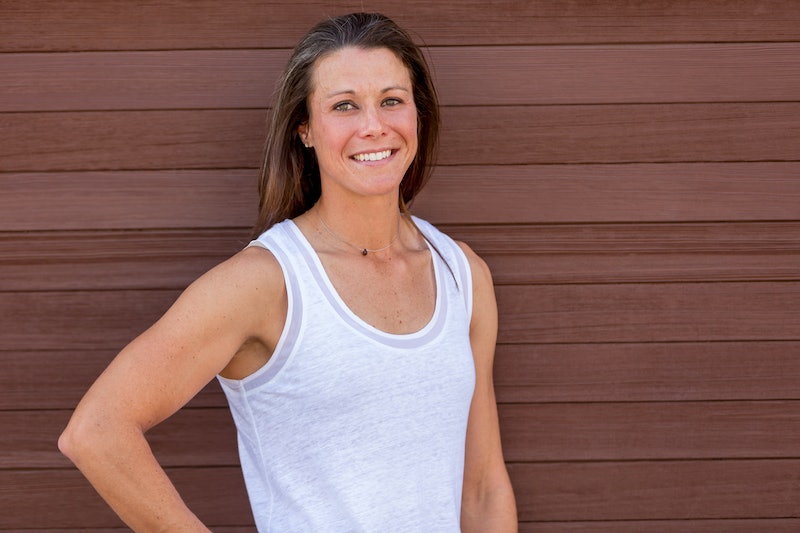 “Let’s walk down to another terminal to see if we can find something to eat,” urged my teammate and good friend Lindsey. Lindsey had been watching me nervously avoiding the only restaurant close to our gate at the airport. This was 12 years before I represented U.S. Rowing at the Rio Olympics, when I was a second-year student at the University of Virginia.

Though we’d never talked about it, Lindsey knew what was going on. She was trying to help me without outright confronting me. It wasn’t that it was a fast-food restaurant — aka in my strict category of foods to vehemently avoid. It was food. It was eating. And it terrified me. Food was the enemy. The thoughts that did jumping jacks in my mind were tormenting and exhausting. If I eat that breakfast sandwich, I would need get an extra workout in or just skip lunch to make up for it... I would probably gain five pounds just by ordering it... But I’m starving...

I hadn’t quite figured it out yet, but I was suffering from an eating disorder — one that had slowly developed over the course of a year, and went on to control my life for three to four years. I was a two-sport Division I college athlete and honor roll student, heavily involved with various student groups and organizations. How I managed to maintain that kind of workload with what I was putting my body through still baffles me.

When I think back on that time, it's as though it was another person’s experience. Somebody else’s story. I want to go back in time and hug that person, look her in the eyes, and tell her, "Everything is going to be okay.” Look at me now: I’m six feet tall, 160 pounds of lean muscle and a healthy amount of fat. I’m not perfect, but I’m perfectly me. I love my body, my mind, and the woman I have become.

At the worst, I was as low as 130 pounds on the scale. I eventually stopped checking. I remember the exact moment that it really hit me what I had allowed myself to become. I was analyzing game tape of a spring volleyball match with my coaches, and I couldn’t believe that I was watching myself. Once a strong and athletic figure, I was now someone else — a costume of bones. I literally didn’t recognize my body. It shook me up a little, but change was slow, and healing would be an uphill battle.

A few days later, I called home and asked my parents to come help me. For someone who still believed they could carry the weight of the world on her shoulders, this wasn’t easy. They hadn’t seen me since winter break, and in three short months, I had lost nearly 30 pounds. I had to warn my mom over the phone that I had lost a little weight and would look different. It was the first step of many to admitting that I was in trouble.

Look at me now: I’m six feet tall, 160 pounds of lean muscle and a healthy amount of fat. I’m not perfect, but I’m perfectly me. I love my body, my mind, and the woman I have become.

Eating disorders come in a variety of forms, and can manifest in very different ways. Anyone who struggles with one is fighting a unique, personal battle. For some, it’s body image; for others, it’s about control, depression, or any number of other reasons. I was fighting a battle with who I was and who I thought I was supposed to be.

I had everything going for me. I was attending one of the top public universities in the country on a full ride. I was fulfilling my dream of being a Division I college athlete. I was doing very well in class. I had friends and a social life. But underneath the poised, perfect facade, my world was spinning out of control. I became depressed, but I kept that battle hidden from everybody around me.

Food became the thing I could control. For all of the things I could not control in my life at the time, I could control how many calories I did or did not consume. I could control my weight by not eating enough, over-exercising, and, when I really needed to, purging after a binge.

I actually didn’t want to be losing all of that weight. As an athlete, I knew I needed it to be successful and remain healthy, but that wasn’t enough to break the pattern. In this way, it was very much like an addiction. I knew what I was doing to my body, but just could not stop. I thought I had full control; I was actually powerless.

Halfway through my junior year of college, things finally began to turn around. I started to accept myself for who I was, and began to let go of the things I could not control. By admitting this, I was able to relinquish the control I needed over food. I’m simplifying a bit here, but at its core, that was the solution that put me on the road to recovery. Self-acceptance is the most liberating step anyone can take toward a healthy and full life. It also helped that I had a lot of support from friends and family.

When I began rowing, my relationship with food quickly became one of many means to achieving my goals and reaching my potential. If I say I’m going to do something, I do it, so this was an easy sell. Wanted to go to the Olympics? Then I needed to get stronger, faster, smarter, and work harder than I had ever worked in my athletic career. Food is what fuels the body, builds muscle, and aids in recovery so that you can get back up the next day and do it all over again and again. There is no substitute for providing the adequate energy the body needs to successfully tackle six to eight hours of training a day. I learned very quickly that calories were the best friends I had to help me push my body to do things I never thought possible.

Today, as an Olympic athlete, I consume anywhere between 4,000-6,000 calories a day to support the grueling hours of training I put my body through. The amount of food I eat is astonishing, and sometimes there's so much that I physically get tired of eating. I eat fat. I eat carbs. I have dessert, maybe two desserts. I eat healthy by choice, but love a good cheeseburger or pizza every now and again. 12 years ago, I obsessed over the calories of the apple I had just eaten.

In order to be successful in a sport like rowing, you must fine-tune yourself. You must push your body to its known limits, and then blow past that edge. In the process, you come to understand your body in a unique way. It becomes a well-oiled machine; your vessel to success. The better you take care of it, the better athlete you become and the more success you will have. Rowers have amazing, beautifully sculpted bodies because they are some of the hardest-working athletes out there.

Through my journey in becoming an Olympian, I’ve learned more about myself than I ever imagined. Most importantly, I’ve come to love and appreciate my amazing body. I love how strong I’ve become. I love that I’ve redefined what I thought possible, and that I can still surprise myself with what my body can do.

Images: Courtesy of US Rowing (5)

More like this
Here's How To Practice Self-Love In Small Ways Every Day
By Mackenzie Sylvester
Zosia Mamet Opens Up About Her Eating Disorder
By Zosia Mamet
11 Beauty & Wellness Brands Grounded In Eastern Philosophy
By Parizaad Khan Sethi
36 Influential AAPI Voices On Pride, Power, & Progress
By Faith Xue
Get Even More From Bustle — Sign Up For The Newsletter