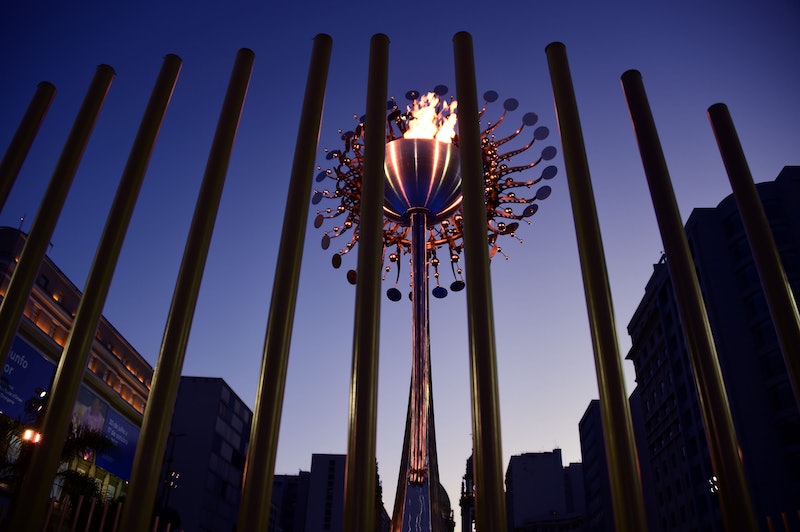 The end of the Olympics is a bittersweet moment that only comes around once every four years. A part of that is extinguishing the Olympic flame — but who extinguishes the Olympic flame? I know it's a huge honor to light the flame at the Opening Ceremony, or even to carry the torch. But what about at the other end of things? When it comes time for the Closing Ceremony, which we're coming up on for the Rio Games on Aug. 21, who is responsible for putting out that flame and bringing the Games to an official close? Is it a set person every time? Is it considered an honor?

Although a steady stream of athletes are responsible for relaying the torch to the Olympic Cauldron to be lit, there doesn't seem to be a set system in place for who brings everything to a close. For the majority of the Closing Ceremonies, the language is oddly passive when it comes to the extinguishing of the torch. In a description of the of the Closing Ceremonies for the 2010 Vancouver Games, Canada.com wrote,

"Earlier, Neil Young sang Long May You Run as the flame was extinguished in the Olympic cauldron — which was still missing one of the four prongs that malfunctioned during the opening ceremony."

No mention of who or what extinguished it, which is pretty par for the course; here's a video of the Olympic Cauldron being extinguished at the end of the London Games in 2012.

I think the reason we don't have an awareness of a specific group of people responsible for extinguishing the torch is that no one person does it. It appears to be something that happens remotely, a cutting off of the fuel keeping the flame burning from afar, so it can remain a symbolic gesture instead of one human being putting out the fire and ending all the fun for the rest of us.

Which does make sense, when you think about it — everybody likes to be the one to start the party, but nobody wants to be the one to tell all the guests that it's over and to go home. (And that the next party won't be for four years.) One notable exception was at the Winter Games in Sochi, in 2012. There, we saw the flame get blown out by a giant, inflatable bear with a single tear rolling down its face. However, that was a tribute to the 1980 Olympic Games in Moscow and their mascot, Misha.

Typically, the fire just goes out, as a symbol of finality that no one has to be directly responsible for. But keep your eyes peeled at the Rio Closing Ceremonies to see if they change anything up.