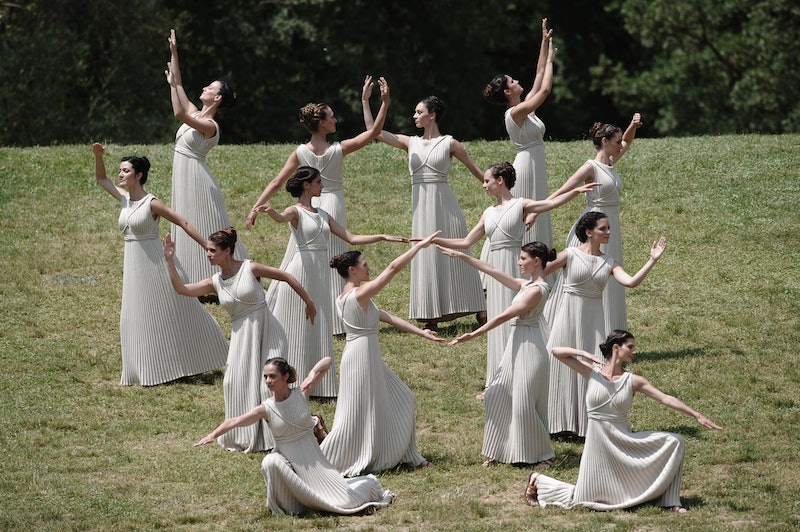 When it comes to the beauty and scale of the Olympics, you might think you've seen everything. However, I bet there's at least cool thing about the lighting of the Olympic torch that everyone should be aware of if they're not already. I'm not talking about the path that the torch travels via the relay, or the igniting of the Olympic Cauldron by someone meaningful to the host country, although they are both beautiful rituals. Instead, I'm talking about how the actual, original flame gets lit every two years for the Summer and Winter Games. It's a beautiful ancient ceremony seeped in ritual, mythology, and it features some pretty impressive lady power as well.

For a bit of background on the Olympic Flame itself, it represents the legendary flame that the Greek god Prometheus stole from the gods to give to Man. In the myths, this represented the moment when we became independent from the gods and were able to flourish on our own. During the Ancient Olympics, a flame symbolizing this milestone burned on the Altar of Prytaneion in Ancient Olympia throughout the Games. That's why, when it comes time to light the flame for our modern day Games, we travel to the same place.

It begins with a procession of priestesses — all Greek actresses, chosen for their poise and regal bearing — dressed in ancient attire. Led by a High Priestess, they surround the ruins of the Altar of Hera, and then ask the sun god Apollo to light the torch. Some of you non-believers might be shaking your head right now, wondering how a mythical god of the sun is supposed to something as physical as lighting an actual flaming torch. However, they use a concave mirror to focus the sun's rays, so it really does involve the sun and tie-in to the mythology of Apollo. It connects our modern ceremonies to those ancient ones, because the fire springs from natural elements in the same location. It's as beautiful as it is meaningful.

Once the flame is lit, it's placed in a small ceramic container, and the priestesses proceed on to the Panathinaiko Stadium. They pass by an olive tree on the way, where a single branch is cut by a boy with both his parents living — which is meant to symbolize peace, even alongside the spirit of competition. Then the High Priestess lights the torch of the first runner, and the relay that we're familiar with begins.

Even though each Olympic Flame is in a different host country, they all come from the same place and are lit in the same way: by a group of badass women, and through a ceremony that links us all the way back to ancient times. It's enough to give you goosebumps if you think about it for long enough.