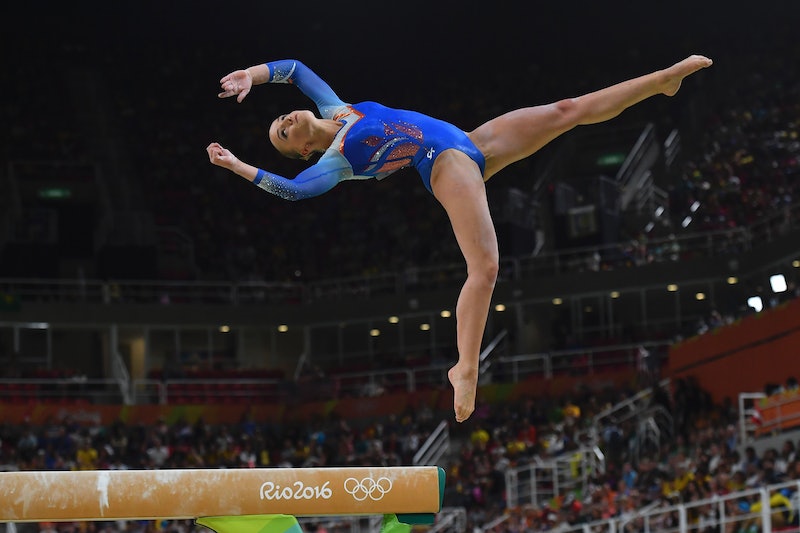 American gymnast Simone Biles isn't the only gymnast competing in the Rio Olympics to have a move named after her. So you might be wondering: Who is Sanne Wevers? The Dutch Olympic gymnast created a double turn completed with a horizontal leg, on beam. Needless to say, anyone who's never heard of Wevers should definitely watch her on the balance beam — her unique routine is certainly worth watching.

In a year in which Biles has proved impossible to beat, competing gymnasts have scrambled to add moves into their routines in order to have a chance at competing with her breathtaking gymnastics. Wevers' use of double and triple turns is one such method. The Dutch gymnast was not a contender to place in any other event, according to Elle, but Wevers may just win gold (or at least medal) in the balance beam finals. And even if she does not win bronze, silver, or gold at the Aug. 15 event, her beam routine is sure to be a crowdpleaser. Rather than shocking onlookers with aerials or layouts, Wevers stuns with her graceful spins. It's no wonder NBC reported that the Dutch gymnastics team nicknamed themselves "Dutch Elegance" — there are few gymnasts whose routines are move elegant than Wevers'.

2016 is a big year for Dutch gymnastics. Wevers, along with her twin sister Lieke, helped the Netherlands qualify to have an Olympics gymnastics team for the first time since 1976, Elle reported. Sanne and Lieke are sometimes referred to as the "Whirling Wevers" — an apt name, since they both excel at spinning on the beam.

Though the 23-year-old Wevers twins have long gymnastics careers behind them, due to multiple injuries for both athletes, the Rio games are one of the first events that the sisters have competed in together. Only Sanne qualified to compete in the beam final on Monday. However, she and her sister both helped the Netherlands place seventh in the team all-around finals — not too bad for a country without a women's Olympics gymnastics for 40 years.

Since she's already 23, the Rio Olympics will likely mark the end of Sanne Wevers' gymnastics career. However, she may manage to go out with an Olympic medal, depending on the quality of her performance on Monday. Yet even if she doesn't place in the top three during the balance beam final, Wevers has left a mark on women's gymnastics — not only did she help bring Dutch gymnasts back to the Olympics, but she will always be remembered by her signature spins.