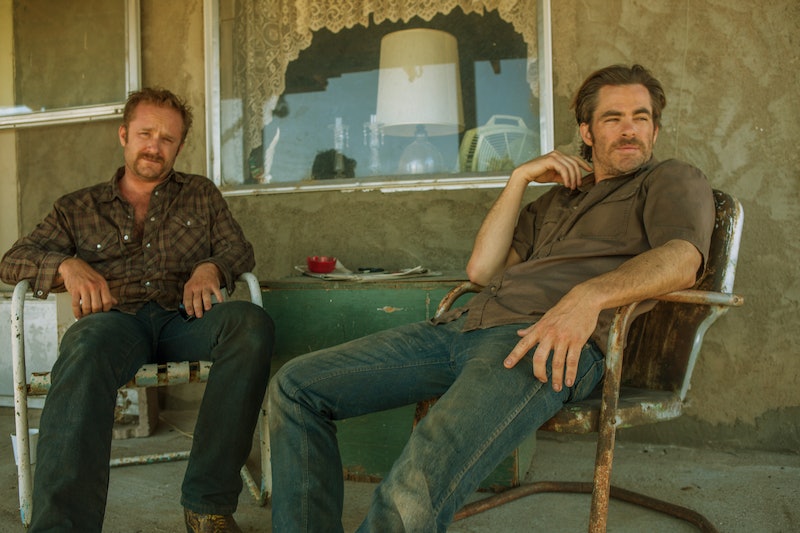 Hell or High Water, in theaters now, is the best movie I've seen all summer. It's gorgeous, brilliantly acted, both a thriller and an intense character study, and features an utterly suspenseful yet satisfying conclusion. The modern western has thrilled critics too, maintaining an impressive 98 percent on Rotten Tomatoes. But as I sat in the theater watching the high-stakes story unfold, I was both exhilarated and immensely sad. Here is a story that features some of the most intriguing, complex characters presented all year, but none of them are women. Sure, there are women in the film, but each and every one of them represents a tired, archaic archetype.

The film follows two brothers (Chris Pine and Ben Foster, good and bad, a familial yin and yang) who resort to desperate measures — a string of bank robberies — to save their family farm. They are chased by the local sheriff's department (Jeff Bridges and Gil Birmingham in outstanding portrayals) who attempt to anticipate the criminals' next moves.

The first female character shown on screen is a meek bank teller from whom the brothers steal. She is the first, but certainly not the last, helpless female bank employee who is swindled by the brothers. In an early scene, one brother take handfuls of cash from the teller, then sticks a single hundred dollar bill into the teller's cleavage before exiting. Sure, it's a western, a genre that historically boasts sexism, but for a film set in 2016, it still depicts these women as half-witted and cowardly. While many of the men working at or frequenting the banks attempt to stop the brothers from getting away with the cash — with their guns or fists — the women fall to the floor, shaking and clutching their bosoms, utterly disturbed.

The next two women the film mentions are dead. The death of the brothers' sick mother serves as our protagonists' impetus to steal, as it is her family farm they are trying to save from foreclosure. The dead mother is not remembered fondly, and because Pine's character had to stay at home with her for many months as she died, she represents what was keeping our hero from living his life. The second dead female is the sheriff's wife. Her absence reveals the sheriff's loneliness.

Other women in the film include an overweight waitress who hits on Pine's character (the sheriff refers to her as hefty and "sassy"), and a sex-worker who tries to maneuver one of the brothers out of money. (When the other brother notices this, he threatens the sex-worker and grabs her forcefully below the waist.) There's also the brother's one night stand — an impressionable young casino worker who is described only by her impressive "tits" and regarded as "a devil in bed." Then there's the elderly female diner employee who is described as a "rattlesnake," and last but not least, perhaps the most annoying trope of all exists in the nagging wife. Or in this case, the nagging ex-wife.

The protagonist's nagging ex-wife takes care of the kids her ex left behind, asks him for child-support, and — understandably — boasts a sullen attitude. But her misfortunes and struggles are never realized, and instead of sympathizing that she got the short end of the stick — as it seems all women in this film did — she is described as just another one of the bitter, complaining women Pine's character tends to fall for. Basically, she's a huge f*cking bummer.

The film does, however, present one positive female character: a middle-aged woman working at the sheriff's department who is in one scene in the film's final minutes. She is smart, competent, and the equal of her male co-workers. It is a huge breath of fresh, non-testosterone filled air, but this empowered woman of the law's three minutes of screen time cannot make up for the dozen other sad depictions of women.

It's interesting to note, however, that while sexism, yes, is historically found in westerns, so is racism. And in an extremely clever, tongue-in-cheek approach, the film turns the classically racist tropes of the genre on their heads. There is an ongoing playful banter between the two sheriffs: a white cowboy and a man who has Native American and Mexican roots. The white character says to the Native American, "cowboys and Indians aren't supposed to get along," but in fact, there couldn't be two partners better suited. But when it comes to the women, the film disappointingly sticks to its genre's history and delivers one awful female character after another.

And to no surprise, the film was made by mostly men. The writer (Taylor Sheridan), director (David Mackenzie), editor (Jake Roberts), Production Designer (Tom Duffield), and so on, are all men. Yet there is a bit of gender diversity on the producer's side. Out of 12 producers, four are women. I reached out to one of the female producers, Kathryn Dean, (who previously worked on Winter's Bone) to get her take. When I address the film's many female stereotypes, she laughs. "I think we need to ask Taylor Sheridan what happened with him and women!" Clearly, the inclusion of these tired representations have not escaped her. "We were aware. But it was ultimately a story about brothers," she says.

And while the producer admits that the women of Hell or High Water in "no way" represent real women, she thinks it's the film's prerogative to treat the movie's women however they choose. "I am sure they represent how some people view women, and that's sort of the right of storytelling in general. You can create a world and make rules for it. It doesn't have to directly correspond to reality. It is merely a function of the moment the movie has created."

That being said, I'm curious to know how Dean, a woman working along side mainly men, found the experience of making the film. "I was pregnant while we were shooting and I tried to hide it from the gang of men who were the heads of department," she admits. "Eventually they found out and were all truly supportive. But there's a new level of vulnerability as a female working when you're pregnant. You can't pretend you're the same as the guys anymore. It's just different."

Indisputably, Dean and her colleagues did a bang up job. But this movie, which by all other accounts is nearly perfect, let me down in such a personal way. Hell or High Water is the kind of film that reminds me why I'm so in love with movies. It's the kind of immaculately crafted film that makes my heart race — not only for the action on screen but for the creative possibility a film of this caliber represents. If there was ever a reason to praise the cinema, this film is it.

a young, female cinephile I wondered why girls, at least the ones I saw on screen, didn't want to raid pirate ships or play cowgirls or search for hidden treasure. I always identified with males more than females simply because I had to. Most movies at the time, and it seems still today, feature far more men than women, so it's no surprise most great movies also skimp on positive female representation.

As far as I know, this is not a problem many men have encountered. My male friends did not grow up wishing there were more male characters that inspired them and informed their childhood. Most women I know have accepted identifying with male characters as a necessary part of enjoying a film. Yet some people still call a female-driven film a "movie for women," whereas a movie featuring males is simply, "a movie." Directors like Paul Feig are trying to fight this notion, but their battle is a long and uphill one. When the trailer for his 2016 reboot of Ghostbusters dropped, angry fans of the original banned together to make the trailer the most disliked in YouTube history. "Please, no one go to see this. We need to make a statement," one commenter says. Another laments: "1,000,000 dislikes....thought it would've happened a lot sooner."

The Center for the Study of Women in Television and Film reports that in 2014, only 12 percent of all protagonists were female — a 3 percent decrease from 2013. But it gets even worse: women accounted for only 30 percent of all speaking characters. It is unsurprisingly, yet still alarming, that this is the case in modern America.

As someone who has pledged my life and livelihood to film, it disappoints me that the world of cinema doesn't love me as much as it loves my male counterparts. I worship jaw-dropping pictures like Hell or High Water, but is too much to ask to want these Oscar-worthy films to star, or at least have supporting characters, that are more than nagging wives and sex workers?

Because of course, this problem is far greater than the women of Hell or High Water. I am not the first disappointed woman to remind the industry that it has grossly misrepresented half of the human population. But I am nevertheless sad. Hell or High Water would have been just as spectacular, if not more so, if it had cast a female sheriff, made the nagging ex-wife into an understanding or charismatic partner, or had one of the many female tellers pull a gun on the bank robbers instead of shriveling to the marble floor. Is it too much to ask that in 2016, women be even half as complex, interesting, entertaining, or badass as the boys?

It's beginning to seem like, after two and a half decades of loyal devotion, the film industry might never love me back.