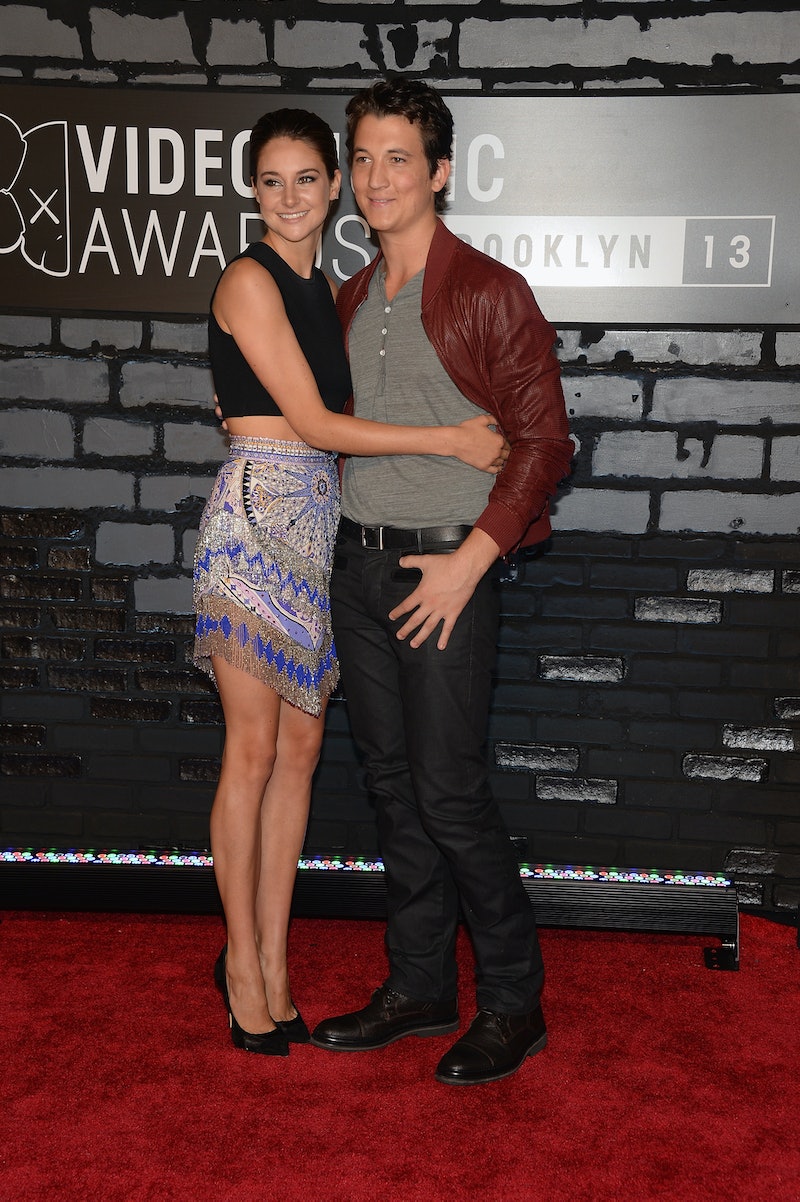 In the world of Divergent , you are only one thing. You can be brave, intelligent, selfless, honest, or kind. But you can't be all of these things, and at the age of 16, you must choose which category to fall into for the rest of your life. But Beatrice (Tris) Prior doesn't fit into any one of these categories, she is divergent, which according to some, makes her a threat to the system. The Spectacular Now 's Shailene Woodley plays the young outcast, Downton Abbey's Theo James plays Four, her mentor-turned-lover, and Kate Winselt takes on Jeanine, the couple's antagonist.

"I play Peter, my fans are called Peter's Princesses," Miles Teller joked at the Los Angeles press day for the film. Teller, who starred with Woodley in last year's indie hit, The Spectacular Now, plays a member of the Dauntless faction who taunts Tris to no end.

"He's like the funniest person you've ever met. We have an amazing sibling relationship," Woodley said of Teller. "When you do a new movie and you're thrown into it, so to have someone that I knew to be that rock, it was really nice. He's got my back I've got his back."

But while the two played lovers in Spectacular Now, their scenes together In Divergent appeared to be anything but friendly. "It was fun to have these scenes where we got to go against each other, like the fight scene. I remember actually feeling hurt that he was saying things that were rude during the scene. And then afterwards I went up to him and I was like, 'I hope you're OK, I hope there's nothing going on...' and he was like 'Shai — we're just acting, come off it!'" she said.

But Teller isn't the only Divergent actor who has worked with Woodley as a love interest. Ansel Elgort, who plays Tris' older brother Caleb, will star opposite Woodley as her romantic interest in The Fault in Our Stars, another YA-to-big-screen adaptation out in May.

"I'm trying not to play only the leading man. So Caleb was awesome to play because he's not the leading man," Elgort said of his Divergent character. "You can easily be pigeonholed in this industry, but also in life. That's one of the nice things about being an actor is ideally you're able to play a lot of different characters and be different people all the time. As human beings, we all strive to be Divergents."

Kate Winslet, who is often type-cast as the fragile but likable leading lady, took a turn for the darker side with her Divergent role, portraying the smart-as-a-whip nemesis to Woodley's Tris.

"One thing that was so profound I found with Kate, is that she loves the art of acting. She loves being on a movie set. She knows her lines, she shows up with questions to ask a director, she's never in her trailer, she loves hanging out with the actors or the kraft service dude," Woodley said of Winslet. "She's a citizen of the set, and as obvious as that seems, a lot of actors, two hours after they get there, they complain about being there. But it's like then why don't you go do something else? We are lucky to have this life and do what we do and Kate fully knows that. She brings this sense of enthusiasm."

But Winslet isn't the only one with a dedication to the set. One day during filming, Woodley had gotten exceptionally sick. "Filming Divergent was crazy because it was the first movie I'd ever done where I was in every single scene," Woodley said.

"There was one moment where I got so sick and Neil looked at me was like well... if you go home, everything stops. So that was really difficult. But I learned what was important to me during the process. When you only have six or seven hours at home during work days and you're working five and a half months straight, you learn what you cherish and you learn who's important," she said. "When you have one phone call to make a day, who you are going to call and that's something Divergent taught me in my personal life. How to use my time, and when you have only a set amount of it, how to use it wisely. Am I going to take care of myself during the process?"