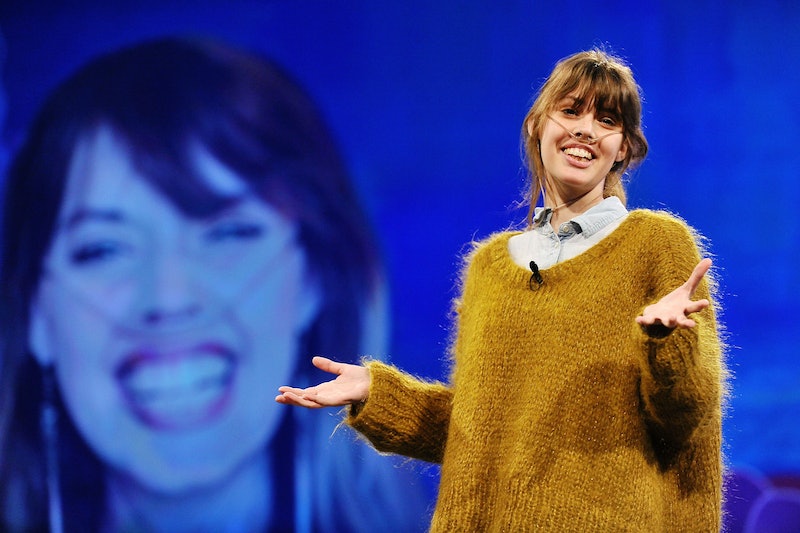 When you first hear about the concept for My Last Days, a special three-night documentary series kicking off on Wednesday, Aug. 17 on The CW, it's natural to think it sounds a little morbid. The series profiles individuals living with terminal illness, after all. However, My Last Days isn't going to focus on the limited amount of time these people have left but how they're living each remaining day to the fullest. No one illustrates that better than Claire Wineland, who will be one of the subjects featured in the first installment of My Last Days .

Even though My Last Days is ultimately meant to be inspiring, I can already tell from the series' teaser trailer that its first episode is going to be a tearjerker, thanks to Claire and her story. If you don't choke up when you see her and her little sister recount the moment Claire woke up from a coma, I don't know what will get you to do so.

You'll find out more about Claire's story when My Last Days premieres. But if you don't want to wait to feel inspired, you can get started learning about Claire below. You may have even already seen or heard a little bit about her since she's kind of a big deal.

She's A Regular Teenage Girl — Except For One Major Difference

Claire is a 19-year-old who hails from Venice Beach, California. She lives with cystic fibrosis, a genetic disease that causes excess mucous secretions and collection, particularly in the lungs, according to her non-profit organization's website. Claire has undergone dozens of surgeries, one of which caused her to become septic and led to lung failure on April 13, 2010. Claire was put on an oscillator vent and entered into a medically induced coma, from which she woke up after more than two weeks. "Claire came through this harrowing event inspired, passionate, and very excited about making a difference for other children and teens by sharing her experience, strength and hope with them," her non-profit's website says.

That aforementioned non-profit is Claire's Place Foundation, which Claire founded when she was 13 years old, according to her bio on the organization's website. It provides emotional and financial support to children and families affected by cystic fibrosis. Due to her work with the foundation, Claire has been honored by The Los Angeles Business Journal's Nonprofit & Corporate Citizenship Awards, and she received the Gloria Barron Prize for Young Heroes, both in 2014.

She's Long Been Sharing Her Journey With The World

Another way Claire inspires and helps others is through her website, The Clairity Project, where she opens up about her life with cystic fibrosis through videos, photos, and writing. Claire has gained a lot of media attention for her YouTube channel, in particular, which features videos where she talks about everything from what it's like to be in a coma (clip above) to why being in the hospital doesn't always suck to how she's preparing for death. Claire imbues her clips with so much charisma and earnestness, they come across more like an amusing vlog series than educational videos, even though you'll totally come away from them feeling enlightened.

You May Have Seen Her On TV Before

Claire appeared in Episode 13 of the short-lived dramedy Red Band Society, which followed a group of teenage hospital patients and starred Octavia Spencer. You also may have seen her during the 2015 Teen Choice Awards, where she was featured as one of the telecast's Pro-Social Honorees. Claire has such a captivating personality, I don't think My Last Days will be the last time we see her onscreen, either.

To add to Claire's growing list of accomplishments, she has also co-authored a book with Chynna Bracha Levin called Every Breath I Take: Surviving and Thriving with Cystic Fibrosis. In the book, Claire shares how she makes the most out of every day while dealing with her disease. Seeing how Claire has a way with words in her videos, I can only imagine that her book is just as compelling.

You May Be Able To See Her Speak Live

Claire has also shared her story in person across the country, speaking at venues such as TEDx Malibu and at PTTOW!, which she continues to do today. Perhaps she'll end up in your neck of the woods next.

But even if she doesn't, luckily all you need to do to get to know Claire and her amazing story is park yourself in front of your TV when My Last Days premieres.