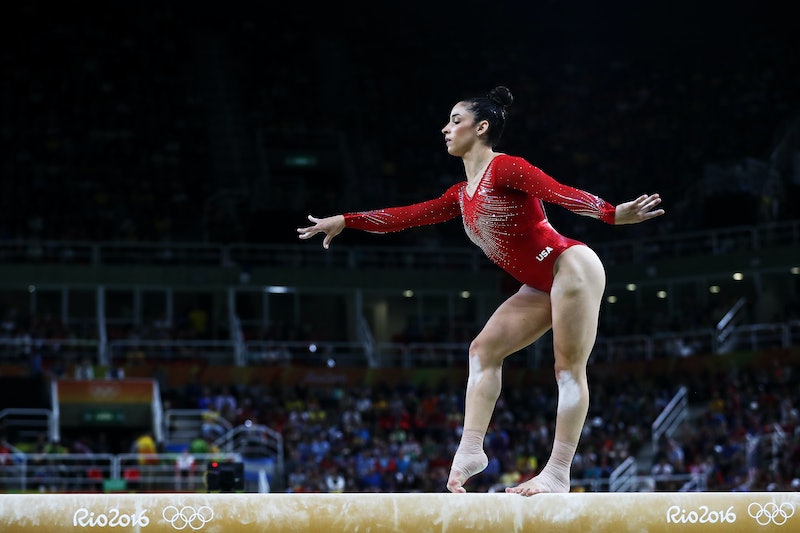 For a casual Olympics fan like myself — the kind who tunes into sports like gymnastics every four years, then returns to a life of inactivity after the last medal is handed out — watching the games is an opportunity to learn about a sport I know little about. However, sometimes it's difficult to follow along with athletic jargon, especially since these athletes aren't, by any means, beginners. On Monday, Aug. 15, a word was mentioned during the beam competition — Onodi — that immediately made me ask: what is an Onodi in gymnastics, and why is it so difficult?

An Onodi, also known as an Arabian front handspring, is a gymnastics move performed by women on beam and floor, according to About Sports' Amy Van Deusen. The tricky move is named after Hungarian Olympian Henrietta Onodi, who performed the move in 1989 and later won the gold medal for vault at the 1992 Barcelona Olympics.

Although the move is named after her, Onodi wasn't the first gymnast to execute the move — Soviet gymnast Olga Mostepanova was actually the first to perform it in an international competition during the 1984 Friendship Games in Prague. However, since Mostepanova didn't submit the skill to the Code of Points, it was instead named after Onodi, who submitted the move in 1989.

When performing an Onodi, a gymnast jumps backwards, then does a half twist into a front handspring — and it's all done in a matter of seconds. All gymnastics elements are assigned a difficulty rating, ranging from "A" to "I" in ascending order of difficulty. The Onodi is an "F" on the scale, meaning it's no easy feat.

Although the Onodi is most commonly performed on the beam — like in this video of an 18-year-old Nastia Liukin doing an Onodi at the 2007 Visa Championships — it can also be performed on the floor as well. The Huffington Post has an excellent breakdown of Ali Raisman's floor routine, which involves a double Onodi and is probably harder than anything I've ever done in my life.

Raisman wasn't the only Olympian to attempt the complex move this year. Romania's Catalina Ponor, the only gymnast representing her country in Rio, also attempted the move on Monday, Aug. 15 during the individual vault finals. Ponor previously won gold in the balance beam competition at the 2004 Athens Olympics, but she wasn't as successful this year. During the vault competition, Ponor fell out of her Onodi and finished in seventh-place during the finals.

After watching perfect move after perfect move from home, it can seem all too easy to criticize athletes who don't stick a perfect landing. But it's important to remember Olympians are unmatched, even if they don't always succeed.

Going into the games, Ponor wasn't phased by the fact that she would be the only Romanian gymnast competing. "If I make mistakes by myself, then it's on my hands. If I don't do anything, it's my fault," Ponor told the Rio 2016 Website. Although she didn't land the move, she's still a huge part of Olympics history. And with more individual events remaining, other gymnasts have a shot at amping up their Olympic fame — perhaps even with the Onodi move.