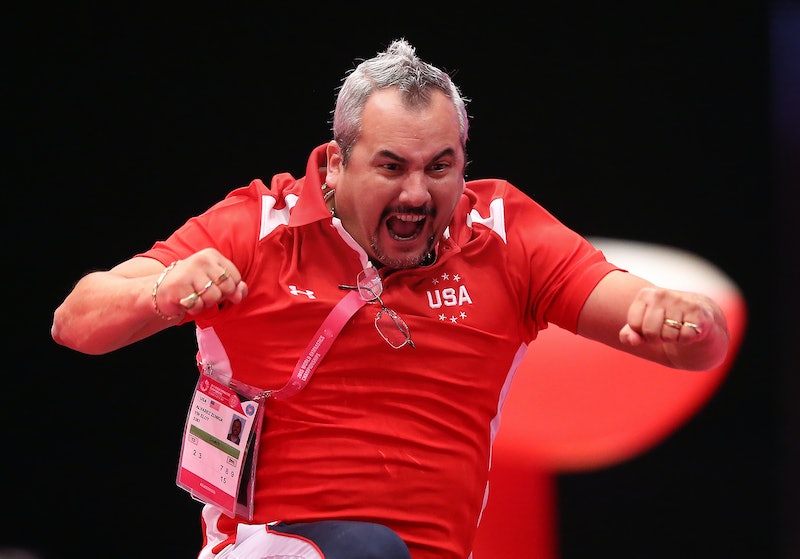 Everyone needs someone they can depend on, and for U.S. gymnast Danell Leyva, that person is his stepfather and coach, Yin Alvarez. Without a doubt, the Olympian can trust that Alvarez will be celebrating his every move. The coach takes his job as a personal cheerleader seriously, and he has bulldozed a space in the American public's heart for both Leyva and himself with his sideline theatrics. The final focus of Leyva's events often fall on Alvarez, who can be seen running up and down and screaming "Yesssoooo!" just inches away from the mat.

Alvarez instilled Olympic dreams in Leyva early on. Born in Havana, Cuba in 1966, Alvarez's hyperactivity had to be channeled somewhere, and originally, he had hoped to do so in the circus. But his family, disapproving of the high tightropes and clowns of the big tent, suggested that he give gymnastics a try instead. Alvarez proved to be a natural talent in the sport. By the age of seven, he had earned a spot at Cuba's national school of gymnastics. He lived and trained at the school as a member of Cuba's national gymnastics team, specializing in the rings, floor, and high bar. This is also where he first met Maria Gonzalez, Leyva's mother.

But Alvarez couldn't shake his Olympic ambitions, and felt that his home country was not the best place to foster them. After traveling with an international gymnastics team to Mexico, Alvarez decided to do something risky: swim through the frigid waters of the Rio Grande to America. Despite not knowing anyone in the country, Alvarez's ambitions carried him through. He told The New York Times, "I always wanted to have my own gym. So that was pushing me to swim faster and faster."

His leap into the Rio Grande paid off, too. By the time Gonzalez joined him in the states with two-year-old Leyva, Alvarez had already saved up and purchased the gym equipment he needed to start his own facility. Leyva's stepfather and mother, who married in 2001, were soon able to place him in the gym they built just south of Miami.

With Alvarez's training and enthusiasm, Leyva went on to become the 2011 U.S. national all-around gold medalist and the 2011 world champion on the parallel bars. Realizing his stepfather's dream, Leyva took home a bronze medal in the 2012 Olympics, and has secured a spot in the 2016 Rio team.

Asked if Alvarez embarrasses him with his sideline antics, Leyva said that it's just the contrary. "Everybody think it's an embarrassment because he acts so crazy, but it's actually a big help. I love hearing him. I love his energy and passion. I feed off of it. It definitely makes me better," Leyva told The New York Times. "We're both huge goofballs, but when it comes down to work, we switch on that focus. I inherited my fight from him. Nothing can break us."